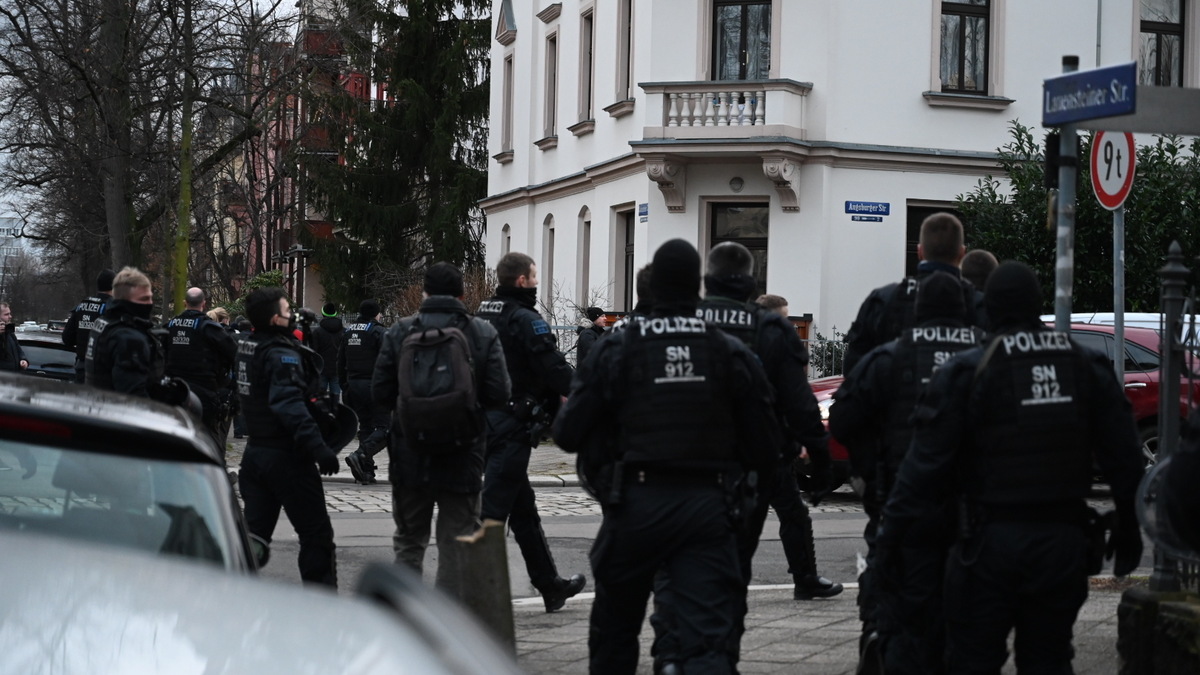 The essentials in brief:

Dresden. Opponents of the Corona policy demonstrated in Dresden on Saturday. The Free Saxons, who are classified as right-wing extremists, called for protests, especially via the messenger service Telegram. However, the city of Dresden had banned all corona demos in the city area in advance.

The east of Dresden was particularly affected. Several hundreds are involved, in addition to Saxon forces, reinforcements from Berlin. Among the demonstrators could also be “violent and extremists,” it said in advance. This is the situation in Dresden:

6:05 p.m.: Now there are still a few groups of demonstrators in the city center. But there are no longer large elevators in the Dresden city area. The police arrested a group at Rathenauplatz near the Dresden synagogue. The helicopter is also circling there.

5:51 p.m.: A video by a Mopo reporter shows how “lateral thinking” head Marcus Fuchs is stopped by the police. When asked, Fuchs said that he had been asked to leave the place. He will do that too – but it is not an official dismissal.

5:44 p.m.: Dresden is not the only city demonstrating. According to initial police estimates, far more than 1,000 people took part in a demonstration in the city center of Chemnitz. A police spokesman said the meeting was reported on site and initially went off without any problems. In Leipzig, too, the police reported a protest march at the Monument to the Battle of the Nations. She has not yet been able to give an indication of the exact number of participants.

5:34 p.m.: Measure at Fetscherplatz: The Saxon police arrest a group, two of which are said to have been in a measure before. Now there is identity verification and criminal charges.

5.20 p.m.: Borsbergstrasse has just been temporarily closed. The demonstrators are now spread all over Striesen, but are oriented toward the city center. For a short time, the police formed a cauldron on Borsbergstraße because the runners kept too little distance. At Schillerplatz, on the other hand, it’s quiet again.

5:12 p.m.: The demonstrators are heading towards the city center again, to Sachsensplatz at the southern end of the Albert Bridge. The route passes some of the university hospital. A large demonstration took place there nine days ago – the police are now gathering forces there to avoid an escalation.

5:02 p.m.: In the city center it is relatively quiet. On the Altmarkt, a man who is already known from previous Corona demos reads parts of the basic law. He is prevented from doing so by the police. There is some excitement, then the police take the personal details.

4:58 p.m.: Among the demonstrators are local AfD figures and politicians from the city council. Pegida founder Siegfried Däbritz is also at the Corona demo, as is “lateral thinking” head Marcus Fuchs from Bautzen, who is traveling by car.

4:37 p.m.: The police helicopter continues to circle over the east of the state capital. Now there is movement again, especially in the police force. The route of the demonstrators changes for a short time – now they no longer want to go to Schillerplatz, but back to the southwest. Do the demonstrators want to make a second attempt to reach the city center?

4:21 p.m.: The train bypassed the police line at the Programmkino Ost by turning onto Altenberger Strasse. In the small-scale residential area of ​​Striesen, the police and demonstrators are playing a game of cat and mouse by spreading out in the residential area and trying to get through the barriers in the direction of Schillerplatz. The police, who are becoming increasingly tough, try to dissuade them – with mediocre success.

4:05 p.m.: The train continues on Schandauer Straße in the direction of Programmkino Ost. The police are also gathering there, with at least ten team buses on site. The train previously split into side streets, now unites. Some are now moving further east.

3:59 p.m.: The train is now estimated to have grown to 600-800 people and continues to move east. However, a van with supporters of the AfD party was stopped by the police. As the train continues to run, the car remains stuck in police action.

3:49 p.m.: A police operation is underway on Borsbergstrasse. The officials pointed out the ban to the demonstration and called for it to be dissolved. The now well over 500 demonstrators are not complying with this. The officers then encircle a group of around 15 people and record their personal details. A man constantly insults the officials – and will have to face the consequences. Meanwhile, the traffic is moving again.

3.40 p.m.: Blockage on Borsbergstrasse. At the level of Bertolt-Brecht-Alle (Kaufland Striesen-West) it is temporarily impossible to get through. However, traffic should be rolling again in a few minutes. The Corona demonstrators are currently walking past there.

3:28 p.m.: After a larger meeting in the city center was prevented, the Corona demonstrators are now apparently on their way to the eastern district of Striesen. Information is shared through a private Telegram group.

3:25 p.m.: According to a reporter, more than 300 people are currently walking east along Stübelallee. On Lipsiusstrasse, turn into a residential area.

3:15 p.m.: Because the city center is sealed off, the demonstrators are now mobilizing near the Great Garden. The police are also gathering their forces there. A demonstration train with around 200 participants sets off on Stübelallee in the direction of the Großer Garten.

3:03 p.m.: Especially in the Wilsdruffer suburb, checks are carried out, including a “car and trailer with a critical statement about the corona measures.” According to the police, a threat speech and a place reference had been pronounced.

2:43 p.m.: According to the police, there are no urgent procedures for enforcing demonstrations. The authority contradicts several reports in the social networks. By Friday noon, 98 notices of meetings had been received from both cities. In the statement from the town hall, this time was given as the last possible date for the receipt of a complaint. All 98 ads were rejected, city officials said.

The reason: It was about projects like “going for a walk”, typical places that were used by “walkers” in the past. In addition, the meeting times matched previously known announcements or an advertisement could be directly assigned to corona deniers and opponents of vaccination.

After the ban announcement are

Mobilization has been going on for days

For several days, various telegram groups throughout Saxony have been calling for the so-called walk in Dresden. The police do not rule out that, despite the ban on demos, several thousand potential “walkers” will appear in the city.

During the operation, there is a low intervention threshold “towards those who are obviously violent and extremists”. That means the officials on site won’t wait long before they put such potential demonstrators in their place. The focus is on “walkers” and possible counter-demonstrators being separated from one another, that a “large, central lift” prevents “lateral thinkers”. and the state parliament is protected.

Not only the Dresden police will be involved in the operation, but also officials from Berlin and the riot police. The people of Dresden would have to reckon with traffic delays, “even in the short term,” says spokesman Thomas Geithner.

As in March 2021, when many potential participants met in the city despite a banned “lateral thinker” meeting, one of the police’s tasks this Saturday is to prevent demonstration attempts by corona deniers and opponents of vaccination. That didn’t quite work last year, and a replacement event took place right next to the state parliament. Hundreds of people used this rally to unite for a “walk”. The police then stopped him on Magdeburger Straße. There were arguments with the officials.

“Stroller” meeting a week ago

A week ago, the right-wing extremist party “Freie Sachsen” called for a so-called walk in Dresden. The meeting should take place in front of the university hospital. There, however, the police managed to prevent an elevator. Later, small groups of these demo participants marched through the city. The police followed them and arrested several groups. The personal details of 200 people were recorded and administrative offense proceedings were initiated. At that time, the ten-person rule for demonstrations applied, and rallies could only take place “stationary”.

This has changed since the end of last week. According to the current Corona Emergency Ordinance of the Free State, up to 1,000 people are currently allowed to take part in demonstrations if they comply with the usual Corona rules – mouth and nose protection and distance. The city has a “walk” and dodge events like that Rally in March 2021 in the state parliament nevertheless forbidden. She justifies this ban with a “hazard forecast”. Accordingly, “it can be assumed that there will be massive violations of the corona protection regulations or criminal norms in connection with a central walk by the clientele who are critical of the measures”.

The city administration later explained that confirmations of receipt for electronically received notices of assembly sent by computer are not approval within the meaning of the prohibition ordinance. According to the current status, no gatherings may take place on public streets or squares on Saturday, this also applies to protest rallies against so-called lateral thinkers. As of Friday afternoon, no legal dispute had become known that was directed against the city hall’s ban.

Jonathan Brown, a pioneer in the knowledge of Golden Age painting