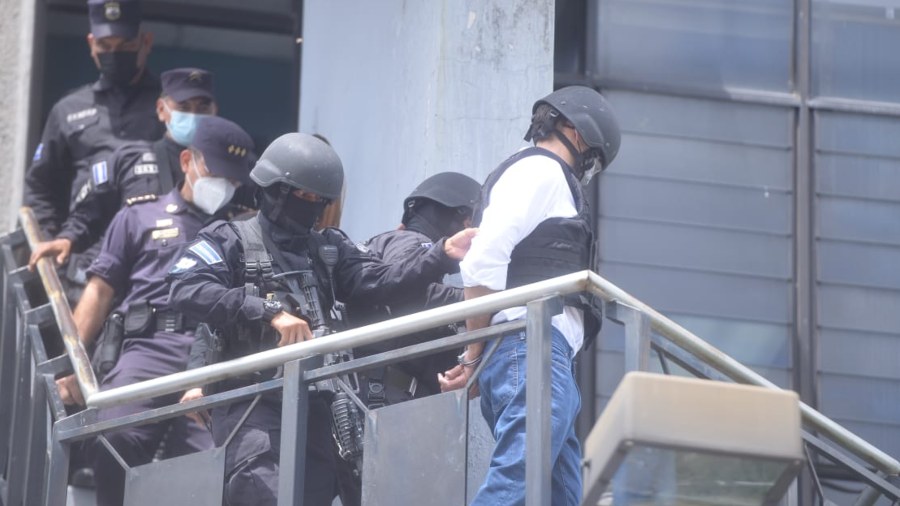 Minutes after being exonerated of the crime of appropriation of income withholding by the Decimo de Paz court, former mayor Ernesto Muyshondt was read another arrest warrant from the Attorney General’s Office for the same crime, but this time he would have committed it in the Solid Waste Directorate of the San Salvador mayor’s office, according to the Attorney General’s Office.

The Attorney General’s Office reported that the three defendants had withheld $ 275,145.31 from income tax in the period from June to December 2020. However, the total amount amounts to $ 550,290 with interest and penalties, according to the tax entity.

Portillo Linares has another judicial process for the appropriation of the withholding of labor fees to the detriment of 45 employees of the Mayor’s Office of San Salvador, for more than $ 678,000. After posting a $ 10,000 bond, he was released last October.

“I only ask that the persecution cease,” Muyshondt said when he was transferred to the police car where he would be taken to the bartolinas of the Police Border Security Division, where he has been held since last Friday when he was arrested for the crime of appropriation of the withholding of income from a family business located in the eastern part of the country.

In this case, the former mayor of the capital had yesterday the initial hearing in the Tenth of Peace court, which exonerated him of charges, after having paid $ 50,645.22 that correspond to the debt he had with the treasury that was $ 21,000 plus interest and fines for not having paid the company’s rent to the Ministry of Finance, according to the Prosecutor’s Office.

“This morning it was possible to prove that Mr. Ernesto Muyshondt defrauded the Treasury of the Republic by appropriating withholdings that they made in his company in 2018,” said a prosecutor in the case.

On June 4, the Second Investigative Court of San Salvador decreed house arrest and the use of an electronic bracelet to the former mayor of San Salvador, Ernesto Muyshondt, accused by the Attorney General’s Office (FGR) for the crimes of illegal groups and fraud electoral system, but before being taken home to comply with the measure, the police captured him for another crime related to tax withholdings.

“They are using the resources, the institutions, the jurisdictions, the positions of public officials to persecute and accuse those of us who think differently and who dare to criticize the terrible decisions of the government,” Muyshondt denounced after his capture.