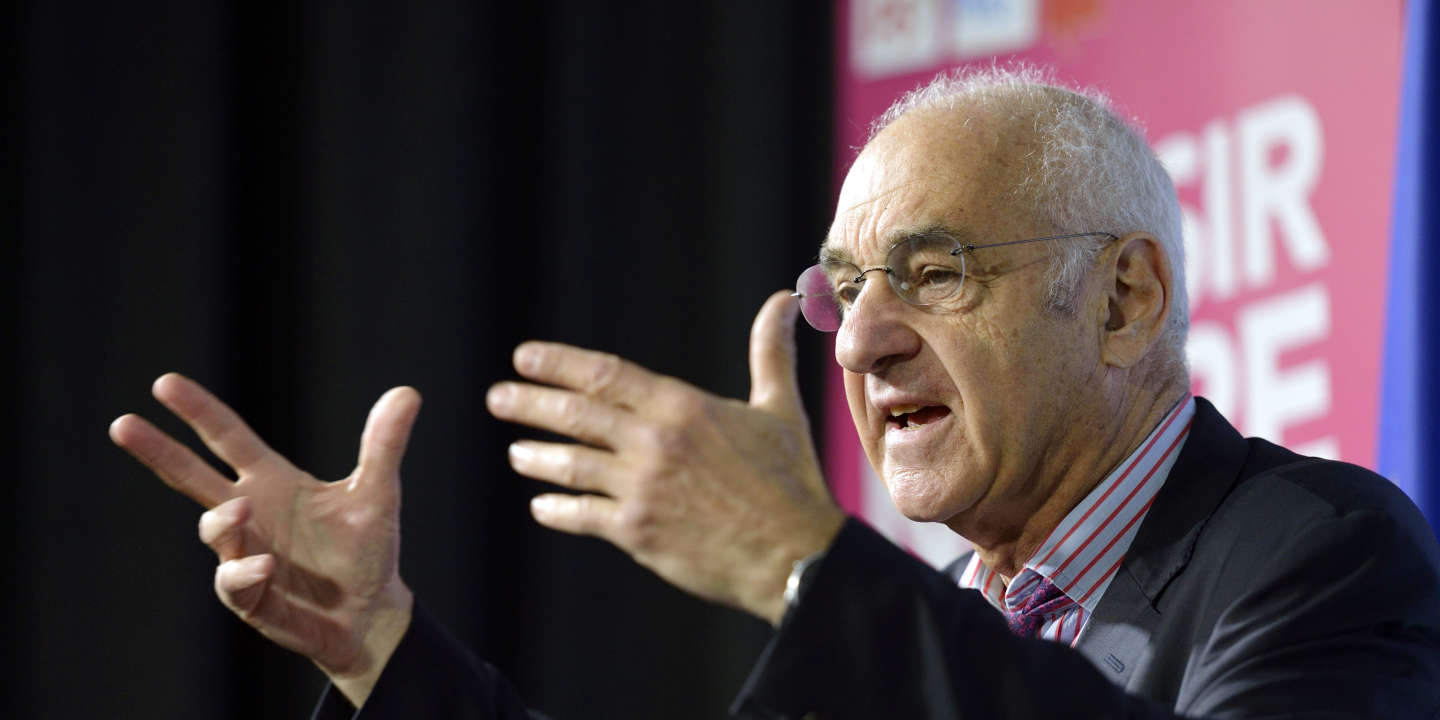 Henri Weber, former socialist senator from Seine-Maritime, died Sunday, April 26, of Covid-19 in Avignon, his family announced. He was 75 years old. This close friend of Laurent Fabius was one of the figures of Trotskyism in France before his conversion to social democracy in the 1980s. His life and his career followed the torments of the XXe century. “One of the great voices of the left has just left us. Henri was one of these fertile memories of the left, he knew the history, down to the smallest details “Greeted Olivier Faure, the first secretary of the PS. François Hollande, former President of the Republic, paid tribute to “A generous man, a bright intellectual, a dear friend”.

Henri Weber was a tall and beautiful figure on the left. He is a generous man and a bright intellectual who … https://t.co/OQtX0CfhxU

Henri Weber was born on June 24, 1944 in Leninabad, in the USSR (today Khodjent, in Tajikistan), in a Soviet labor camp, on a hospital ship moored on the banks of the Syr-Daria river. His Polish Jewish family fled his town of Chrzanow, Galicia, a few miles from Auschwitz, during the Nazi invasion of Poland in 1939, choosing the USSR.

Refusing to become Soviet citizens, the Weber spouses were first sent to a labor camp in Siberia before being transferred, at their request, to Leninabad. There, the father is employed as a lumberjack and the mother as a seamstress. “It was not a severe regime detention center, much less an extermination camp but a real labor camp: once their day was over, the detainees went about their business freely”, explains Henri Weber, in his autobiography Youthful rebel (ed. Robert Laffont, 2018).

After the war ended, the Weber family returned to Poland for a while, but still prevalent anti-Semitism convinced them to leave. In 1948, the Weber family moved to Paris, where the father resumed his watchmaking activity.

Opposition to the Algerian War

Young Henri grew up in the Belleville district. He’s a good student but rowdy. He climbed all the steps of the republican meritocracy and ended up integrating the Jacques-Decour high school after his father and mother had moved to the 9e more bourgeois district. It was during this time that Henri Weber became politicized. His parents, “Atheists and anticlericals at will”, according to Weber, are on the left.

Young Henri and his brother are also registered with the Hachomer Hatzaïr, a secular, Zionist and socialist scout movement. It will be his true political matrix, which will guide his future militant choices. Starting with his opposition to the Algerian War (1954-1962) when he was in high school. At 16, he joined the Communist Youth to the chagrin of his anti-Stalin parents.

He was still a member of Maurice Thorez’s party when he joined the Sorbonne in 1962. As a good, disciplined activist, he joined the UNEF and the Union of Communist Students (UEC). At the time, the UEC was a cauldron where all that the radical left had chapels rubbed shoulders with. The first intervention by Henri Weber is very particular: he accuses his comrades of not emptying the trash or cleaning their premises and invites them to display the sales figures of Clarity, the UEC newspaper.

The intervention did not go unnoticed. Especially for Alain Krivine, who spots this born organizer. Three years older, he is an “old” student activist who is fed up with communism. He discreetly prepares his departure and that of his Trotskyist comrades from the UEC. The two men will befriend each other. Krivine will succeed in convincing him, during a summer camp of the UEC in Algeria, to join the partisans of the IVe International.

Trotskyists were finally excluded from the PCF and the UEC in 1965. The Revolutionary Communist Youth (JCR) was created. Their work is heavy: it is a question of existing in the jungle of leftist organizations of the time, differentiating themselves from other Trotskyists, creating “A revolutionary avant-garde”… A full-time job in which Weber is involved alongside Alain Krivine and Daniel Bensaïd. Henri Weber thus created the JCR order service, which was feared in particular by far-right activists.

When May 68 broke out, JCR was a must in the student environment. More open than the others, these Trotskyists are able to work with libertarians as in the March 22 Movement, where Daniel Bensaïd plays a key role and whose figure is Daniel Cohn-Bendit. Less austere than its competitors, the JCR is attractive and does not appear to be a sectarian organization. Weber, Krivine, Bensaïd live these days like a ” general repetition “, reproduction of the Russian 1905. Henri Weber is at all meetings, all demonstrations, he keeps barricades on riot nights.

After the events, the JCR was dissolved like other small groups. It is reborn first in the form of a newspaper, Red, which Weber will direct. The publication is financed by the copyright of the book co-written by Weber and Bensaïd, May 1968: a dress rehearsal? (Maspero, 1968).

It’s a great time for him. While he was a full-time activist and worked on the birth of another organization (the Communist League, which was founded in 1969), he received a phone call from Michel Foucault: the author of Keep an eye on and punish offered to integrate his team into the new university in Vincennes, which would see all the leftist gratin pour in. Weber accepts. He will teach philosophy, not failing to be hounded by the many Maoist activists active on campus.

The 1970s saw the upheavals of May 68: activism was unbridled there, fights between factions and against the far right were permanent. In 1973, after hard clashes with the neo-fascists of the New Order, the Communist League was dissolved and its leaders went underground. The Revolutionary Communist League took over in 1974. It was at this time that Weber met Fabienne Servan-Schreiber, whom he married with great fanfare in 2007.

“At the end of the 1970s, I was ripe to join the experience of the new PS. I needed time to do my mourning work. So I left quietly “

Little by little, the first cracks appear in Weber’s Trotskyist convictions. He moves away from his organization, from his comrades, and concentrates on his research work, observes what is happening abroad. He is particularly interested in Eurocommunism. He reads, digs, writes several works (like Marxism and class consciousness, Bourgois, 1974; Italian Communist Party: at the source of Eurocommunism, 1977, with the same publisher), works on his material, rediscovers the writings of Max Weber, Hans Kelsen, Alexis de Tocqueville, Benjamin Constant… “In the late 1970s, I was ripe for the experience of the new PS, confesses Weber in his autobiography. (…) I needed time to do my mourning work (…) So I left quietly. “

Weber will take time to take the plunge and take his card decorated with the fist and the rose. In the early 1980s, he began a long investigation into the employers’ movement, which would become a book a few years later (The Patrons’ Party: the CNPF (1946-1986), Seuil, 1986). It is in this context that he meets Laurent Fabius. The two men are seduced by each other.

Read Henri Weber’s column published in February 2020: In Europe, “the multiplication of party-companies does not constitute progress for democracy”

When Laurent Fabius became Prime Minister in 1984, Henri Weber first worked for him discreetly, sent him notes, then ended up joining his first circle in Matignon. In 1986, he joined the PS, which would be his final political “house”. He will animate the Fabiusian current there, notably with Claude Bartolone. He followed Laurent Fabius at the head of the PS when he became first secretary in 1992. For almost thirty years, Henri Weber was an indestructible member of the socialist leadership, respected and appreciated by all, in particular by his erudition and his manner of raising internal debates. “Attentive, deep, funny, seductive, open, erudite, tireless swashbuckler and militant, this warm and thoughtful rebel will have attended all the honors without being trapped in anyone”, wrote Laurent Fabius on Monday after the announcement of the death of his traveling companion.

in parallel, Henri Weber exercised several mandates: deputy mayor of Saint-Denis (1988-1995) then senator of Seine-Maritime – bastion of Fabiusie – between 1995 and 2004. He will then be MEP between 2004 and 2014, until the age 70. Henri Weber concluded his memoirs as follows: “With a few ex-barricaders, we promised to pass the baton to the younger generations, over 70 years of age. And we kept our word. “

Henri Weber in a few dates

1965 Creation of the Revolutionary Communist Youth

See Also:  Twenty-six years after the death of Ibrahim Ali, Marseille "does justice to one of its children"