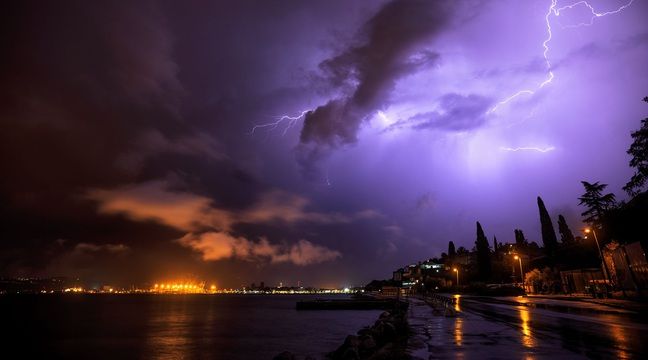 Four departments remain on orange alert for thunderstorms this Monday morning,
Météo-France informed in its morning bulletin. According to the organization, the Allier, the Loire, the Puy-de-Dôme and the Rhône are affected by a strong risk of violent phenomena and strong accumulations of precipitation.

On Monday morning, the rainy-thunderstorm area will rise to the north of the Seine and Champagne-Ardenne then evacuate to the Benelux, according to Météo France. At the rear, a few showers will drag from the northeast to the center-east and to Occitania. An area of ​​more frequent and locally stormy showers will already invade Brittany, the Pays de la Loire, Poitou-Charentes and northern Aquitaine. The rest of the country will benefit from a lull.

In the early afternoon, thunderstorms will break out over the Massif Central. Very quickly, they could take on a violent character over the west of the Allier and Puy-de-Dôme, the Loire and the north of the Rhône, with locally heavy hail, high intensities of precipitation, and gusts of wind of the order of 80 km / h, even very locally vortex phenomena.

Up to 34 degrees in Provence

The strongest thunderstorms will clear the region at the end of the afternoon, but will progress rapidly over Burgundy, Franche-Comté, then towards Lorraine and Alsace in the evening. Occitania and the Mediterranean rim will benefit from milder, variable or cloudy weather with rare showers, except in the Pyrenees where the afternoon will be punctuated by showers and thunderclaps.

The minimum temperatures will be between 10 and 16 degrees in general, between 16 and locally 20 degrees on the Mediterranean rim. In the afternoon, it will still be 25 to 29 degrees from the German borders to Franche-Comté and Rhône-Alpes. The thermometers will climb between 26 and 30 around the Mediterranean, locally 32 to 34 in Provence. Elsewhere, temperatures will reach 18 to 24 degrees.