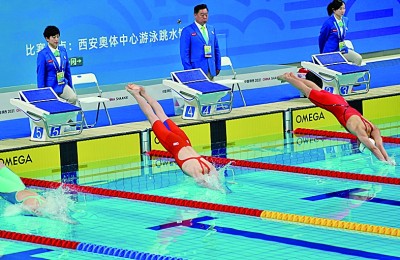 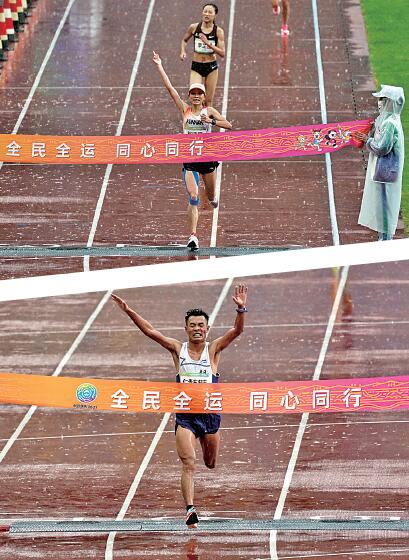 At 7:30 in the morning of September 26, the women’s marathon of the current National Games fired in the rain. Half an hour later, 29 male runners also set foot on the track. These are the last two events in the track and field events, kicking off the 31 events throughout the day. Subsequently, 29 small events such as taekwondo, five-a-side basketball, three-a-side basketball, volleyball, gymnastics, table tennis, wrestling, and road cycling also started the final competition one after another. By 10:30 in the evening, the gold medal winners of the men’s three-person basketball men’s adult group were selected in Xi’an City Sports Park. So far, the fourteenth National Games of the 14th National Games of 410 sports competitions are all over.

In the swimming pool on the evening of the 26th, the enthusiasm and popularity of the National Games continued since the start of the National Games. The players in the swimming pool were struggling to move forward, cheering and cheering in the audience one after another. In the women’s 50m freestyle competition, Guangdong’s Liu Xiang broke the Asian record. Then, the combined teams returning from the Tokyo Olympics have successively won the women’s and men’s 4x100m medley relay championships.

In the track and field, Su Bingtian, who set a new Asian record in the Olympics, ran into the 10-second mark for the tenth time in his athletic career and won the first National Games individual gold medal; two Tokyo Olympic champions Gong Lijiao and Liu Shiying won in individual events After the gold medal, they participated in the women’s throwing team competition on behalf of their respective provincial teams. The project includes shot put, javelin, hammer throw, discus, is a new project in the 14th National Games, the purpose is to promote the local teams to further consolidate the reserve talent base of track and field advantage projects. In the end, the Hebei team, with strong players such as Gong Lijiao, Chen Yang, and Su Xinyue, won the championship.

The number of delegations that won medals in the Fourteenth National Games has increased significantly compared with the previous one, demonstrating the new pattern of my country’s competitive sports development in the new era. The sports power provinces have fully demonstrated their comprehensive strengths with a full range of participating events and a high level of competition at this National Games. All provinces (autonomous regions and municipalities) continue to consolidate the foundation of competitive sports, continue to make breakthroughs and innovations, and have outstanding performance in their respective advantageous projects, becoming the backbone of the sustainable development of competitive sports. Relying on its geographical advantages, the western region has concentrated resources to develop characteristic projects, and has made new breakthroughs. Hong Kong and Macau actively participated in the competition and demonstrated strong competitiveness in some events. Macau won the first medal since participating in the National Games. The industry sports associations also give play to their own advantages and contribute to the development of competitive sports.

A group of Tokyo Olympic champions insisted on training during their return to China and adjusted their competitive status scientifically. Su Bingtian, Ma Long, Quan Hongchan, Hou Zhihui and others challenged themselves and surpassed their limits at the National Games, demonstrating China’s speed, strength and level of China. A group of “post-00s” and “post-05s” teenagers represented by Wang Zhilin, Miao Wanru, Zhang Boheng, etc. showed their strong ability to challenge Olympic champions and surpass world records, staged a “youth storm” and demonstrated that our country is diving The thickness of talents in traditional competitive sports such as shooting, shooting, gymnastics, and table tennis highlights the vigorous vitality of continuous improvement and continuous struggle in my country’s competitive sports. In basic events such as track and field, swimming, competition is fierce, and examples of surpassing oneself abound. Shandong swimmer Yang Junxuan, on the basis of winning the gold medal for the delegation, also swam better than the Tokyo Olympics.

Out of the needs of the “Olympic Glory Plan”, the Fourteenth National Games set up competitions for young age groups in many events, such as diving, rock climbing, skateboarding, and break dancing. Li Guowei, Director of the Rock Climbing Department of the Mountaineering Management Center of the State General Administration of Sports, said: “Climbing into the Olympic Games has brought a qualitative leap in the development of the project. Promote more provinces, autonomous regions and municipalities to develop rock climbing.” According to the latest statistics, the number of participants in rock climbing in China has reached more than 300,000, with more than 3,000 registered athletes.

As a new event in the Tokyo Olympics and Paris Olympics, skateboarding has also become a new sports event in the 14th National Games. Cai Yongjun, the head of the national skateboarding team, said that after the event entered the Olympics, China’s skateboarding has achieved leapfrog development. In this National Games, the competitive strength of each team has been greatly improved, and many of the difficult moves in the past have been used by most players. Mastered.

The Fourteenth National Games, which has been fighting for more than ten days, will end tomorrow night. Four months later, the Beijing Winter Olympics and the Paralympics will be held worldwide, which will be another landmark and landmark major sports event in the history of sports in my country. “China’s speed, China’s power” will surely reappear in the Olympic arena again.