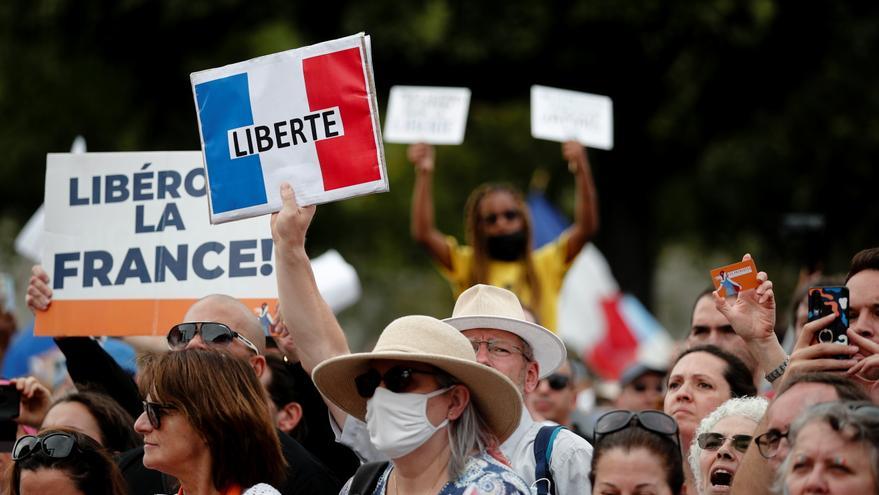 Demonstration against the anticovid measures of the French Government in Paris.
EFE

After four days and four long nights, French deputies and senators approved on Sunday night the bill on the new sanitary restrictions aimed at containing the fourth wave of coronavirus. “After 60 hours of debate, the majority and the opposition have found the path of unity to fight against the pandemic“, Summarized the Minister of Health, Oliver Véran, celebrating” a good night for democracy and a bad night for the virus”. The Constitutional Council will examine the regulations before they are promulgated.

It was the French president, Emmanuel Macron, the one in charge of announcing to his fellow citizens, on Monday, July 12, his strategy against the new rebound in contagions: decree the compulsory vaccination of hospital and nursing home staff, and the extension of the health pass – consisting of a vaccination certificate, a test covid-19 negative for less than 48 hours or a test of having passed the virus in the previous six months – to bars, restaurants, shopping centers and long-distance transport.

A week later, the legislative text received the approval of the Council of Ministers and began its parliamentary journey, a journey starring heated debates and 2,300 amendments. In the spotlight: the application of the health pass among minors between 12 and 17 years of age, the duration of the regulations, the sanctions imposed on businesses that do not comply with the restrictions or the possibility of dismissing employees from the spaces concerned that do not have their own health certificate.

The extension of the health pass, a measure considered inapplicable or too restrictive by certain opposition parties, was approved, but its conditions of application were lightened. Those establishments that do not respect the norm will face fines or administrative closures, but no criminal sanctions will be imposed. The regulations will not affect minors between 12 and 17 years old Until next September 30 and shopping centers, unless decided by the prefecture, will be exempt from the rule. Certain senators and deputies advocated exempting the terraces as well, without success.

Not having a health pass cannot justify a dismissal

Workers in the affected spaces – restaurants, bars, etc. – without a health pass they cannot be fired as decreed by the initial version of the text. As of August 30, employees who do not have the justification may be suspended from employment and salary, but in no case will they lose their job.

Refering to compulsory vaccination, the norm will affect the personnel of hospitals and nursing homes, also firefighters and certain military personnel, as well as professionals and volunteers who work with fragile people. All of them will have until September 15 to receive their immunization, from then on, those who break the rule will not be able to exercise and will be suspended, but, at the request of the senators, they cannot be fired as established by the original rule.

The application of these restrictions is subject to the extension of the state of health emergency, until the next November 15, instead of December 31 as expected by the Government. As of that date, its extension must be submitted to Parliament for approval.