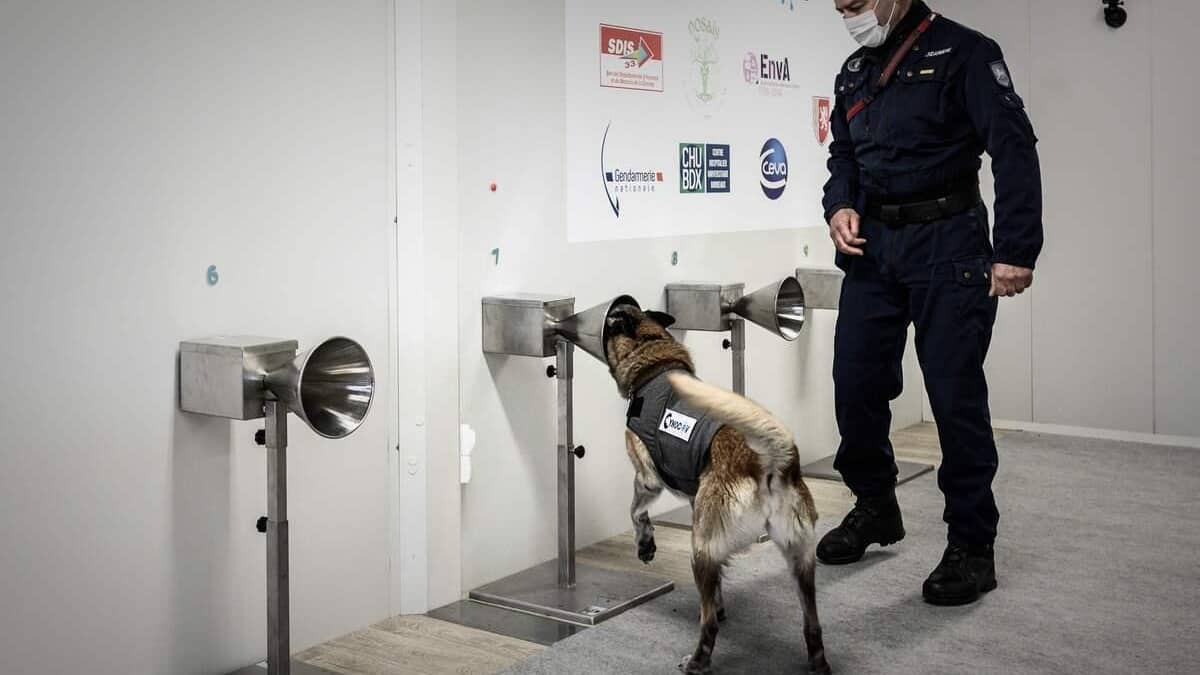 What if dogs became “allies” in the hunt for the virus? Usually, Eliot tracks criminals or missing people, but, for the past month, this malinois has also been training to detect the Covid in human sweat, as part of a study in the South-West of France.

The objective is to provide a “complementary solution” at a time when “we need an expanded, rapid and non-invasive screening offer”, underlines Thierry Pistone, infectious disease specialist at the Bordeaux University Hospital Center (CHU), which has partnered with Ceva animal health, 1st French veterinary laboratory (5th worldwide) in this project presented to the press on Friday.

Like Eliot, the Marvel Labrador and three other Malinois and German shepherds, all members of the canine brigades of the gendarmerie and firefighters, have been training since January 4 in Libourne, near Bordeaux, in their new “game”: to spot sweating compresses taken for 10 minutes under the armpits of people positive for COVID-19, at the start of infection.

Thus, almost every day, sweat samples arrive from the CHU to be presented to the truffles of the dogs trained at the training center installed by Ceva at its headquarters in Libourne. “They detect degradation organic matter resulting from the infection”, devoid of viral expression, specifies Dr Pierre-Marie Borne, referent at Ceva.

At the signal “Au cone!” The dogs get to work. After Eskiss, specialist in the detection of “stups”, weapons and ammunition, the Malinois Eliot in turn plunges his muzzle into a row of metal cones.

Suddenly he marks in front of two of those funnels, tail wagging: inside are two separate samples of sweat taken from positive patients. ” It’s good ! », Congratulates his master before presenting him with a treat and his favorite toy as a reward. A few days ago, this gendarmerie track-defense dog was on the trail of a missing person.

Called Cynocov, this project, supported by the Nouvelle-Aquitaine region, is based on the Nosaïs-Covid19 method developed by Pr Dominique Grandjean of the Maisons-Alfort National Veterinary School (near Paris), which enriches the immense dog “olfactory library”, already used for the detection of certain cancers.

“On average, dogs manage to detect 95% of positive cases for Covid-19”, says Pr Grandjean. This method has been tested in Corsica, a French island in the Mediterranean, and according to the project leaders, “40 countries are working on the subject”.

After six to eight weeks of training at a rate of four mornings per week, the dogs’ aptitude must still be demonstrated during a clinical study at the CHU before any deployment of the tool.

Objective: to test their performance on different types of samples referring to different areas of the disease, i.e. their ability to apprehend serious or non-serious forms, contagious or less contagious, symptomatic and asymptomatic subjects, but also those infected with a variant.

If successful, “the tool will mainly be used to pre-screen” suspicious people in order to “target confirmatory screening needs” by the reference nasopharyngeal RT-PCR test, explains Dr Pierre-Marie Borne. , at Ceva.

“When we know that we will soon have to screen people who are a priori asymptomatic in all kinds of spaces – schools, nursing homes, airports, this type of tool which offers at least a strong criterion of suspicion, will allow in term acceptability and responsiveness to facilitate this process ”, estimates Pr Denis Malvy, head of the infectious and tropical diseases department at the CHU.

For the professor, also a member of the scientific council, these dogs are “almost our allies in the production of a screening tool which will have”, he hopes, “its place in the need to manage this health emergency”.