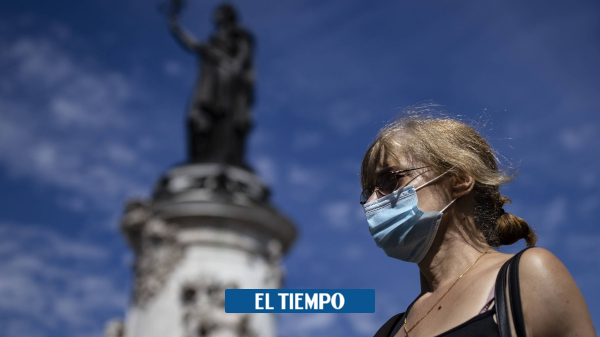 The French Prime Minister, Jean Castex, announced this Thursday a progressive end to the restrictions to gradually leave the confinement, with the goal of ending the vast majority of measures on January 20, “if the figures improve.”

We suggest: Lufthansa returns to Colombia with covid-19 tests

“On January 20, if the figures improve, we will eliminate the curfew and reopen bars and restaurants. Throughout this period, teleworking should be as widespread as possible,” Castex said at a press conference, two days after the president Emmanuel Macron will announce the great lines of deconfinement

The head of government confirmed the reopening of shops from next Saturday with a capacity limited to one person for every eight square meters, not including dependents and taking into account that each couple or family will count as a single customer.

Until December 15, citizens may leave their homes for a maximum of three hours for walks, shopping or sports, always carrying a sworn statement justifying the departure.

(Of interest: Cuba faces the challenge of attracting tourists amid the pandemic)

In a second phase, starting on December 15, museums, cinemas and shows will reopen and a curfew will operate between 9:00 p.m. and 6:00 a.m., but movie tickets or shows will serve to justify a possible delay.

Travel between regions and to the European Union according to the recommendations of the countries; Extracurricular activities for children will be resumed and an expansion of the capacity in places of worship will be evaluated, now set at 30 people.

The curfew will be lifted only on the nights of December 24 and 31 to allow family reunions but the government insists that “it will not be a Christmas like the other.”

Only as of January 20 will the curfew end and bars will be allowed to reopen, restaurants and gyms, but only if the epidemic data improves. The Minister of Health, Olivier Véran, estimated that the confinement, imposed on October 30, and the weeks before the curfew have been necessary, effective and proportional measures.

Too: The 4 Colombian destinations preferred by foreigners

“Positive cases are constantly decreasing. Every week there are 30% fewer diagnoses than the previous one,” explained Véran. In recent days, the average number of daily cases is 15,000, so the Government estimates that in the second week of December France it would have achieved the government objective of reducing them below the 5,000 daily level.

“If we relax with the measures, the situation could deteriorate quickly,” said Castex, who defended that these provisions will avoid the fatigue of citizens that causes the continual slowing down and reactivating the restrictions.

The French Government also detailed a series of state coverage devices to mitigate the economic impact of the confinement, with an aid of between 15 and 20% of the turnover for sectors that have been affected although they have not closed.

For closed establishments, they will cover a monthly aid of 10,000 euros or the equivalent of 20% of the turnover of the same period of 2019. Castex also proposed to make 2021 the year of the french gastronomy with gastronomic offers and activities to help restaurant businesses modernize and encourage citizens to return to restaurants when sanitary conditions allow.

See Also:  Trzaskowski, the great hope of the liberal-conservative opposition

(Of interest: ICON Park ™, a space in Florida to relax and live Christmas)

In addition, the Government will help some 400,000 precarious workers with an aid of 900 euros per month between November and February to guarantee a minimum income to those who worked at least 60% of the year 2019.

Regarding vaccines, Véran specified that they have turned to the country’s health and ethical councils to establish which should be the priority public to receive them, and they hope to offer the data in mid-December.

“We have to have a safe and effective vaccine to be able to propose it to the French,” said the minister.

Spain will demand negative PCR test from travelers from Monday