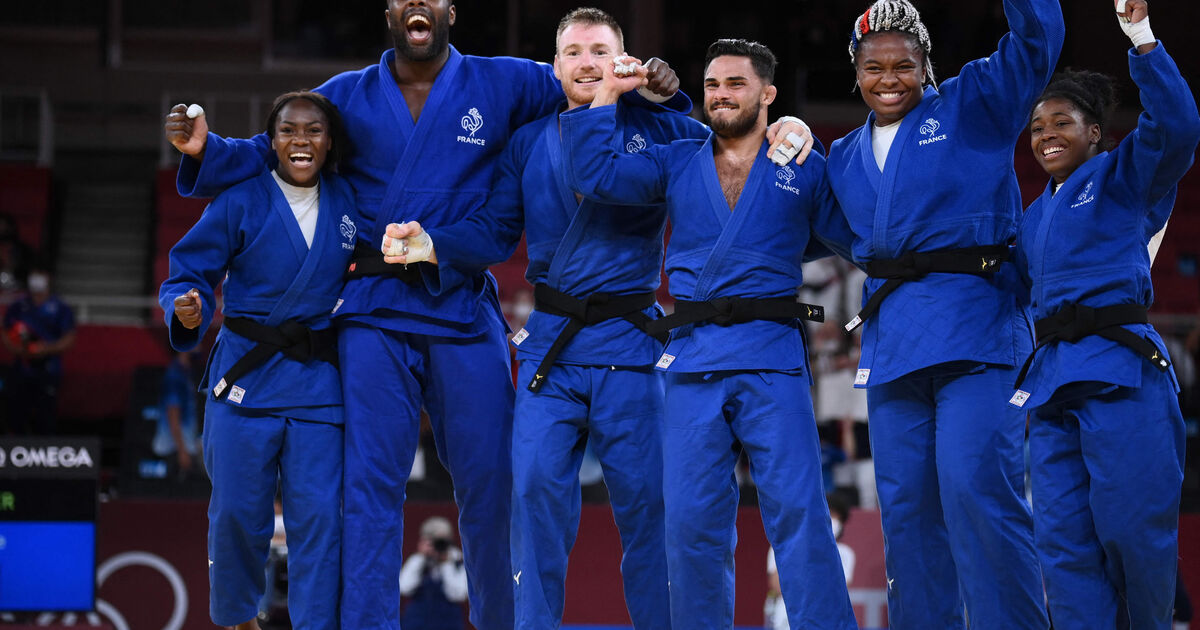 The French judokas closed their beautiful week with a second gold medal, in the mythical lair of Nippon Budokan, the eighth all-metal of their Olympic adventure in Tokyo.

And suddenly, an explosion of joy, a collective explosion, girls and boys mingled. The French mixed judo team won the gold medal at the Tokyo Games on Saturday, winning in the final against the big favorites Japanese by 4 wins to 1.

Led by Clarisse Agbegnenou, individual gold medalist, and Teddy Riner, who confirmed his good dispositions despite his disappointment the day before in the + 100 kg category, the blue judokas concluded with a feat an intense and fruitful week.

“I’m taking two titles home, we beat Japan at home, there, I think they will not recover and we will be the happiest, we will enjoy, it’s magic”, reacted Clarisse Agbegnenou at the microphone of France Televisions, the heavy right arm of Teddy Riner on the shoulders, still not coming back to have beaten the Japanese and their nine Olympic championship titles since the start of the Games in their legendary room at the Nippon Budokan.

“I think that’s the word, it’s magic”, Immediately engaged the colossus of French judo, which had been left the day before with a disappointment up to the expectations it had raised. “At the start of the day, I think we entered it very slowly, we scared each other [les Bleus ont failli passer à la trappe face à Israël en quart de finale, ndlr] but the teams are the teams, we have to rely on each other and that’s what happened throughout the day […] First Olympic edition, in Tokyo, where it all started, and we won, against Japan! Who would have believed it ?”

This mixed event, one of the symbols of the International Olympic Committee’s desire to make more room for women and move towards parity, made its debut at the Games.

Fifth fighter in the running, Sarah-Léonie Cysique, who had to settle for money at the beginning of the week on a cruel hansoku-make (disqualification) for playing dangerous to the integrity of his own body, brought the 4th and final point.

The whole team then exploded with joy, perfectly illustrating the collective dimension of this individual sport evoked the day before Larbi Benboudaoud, director of high performance for the French judo teams. “We find our motto of judo: mutual aid and mutual prosperity. As I often say, we are an individual sport with collective practice. We cultivated that. As we were in a good dynamic, it pulled everyone up “, he explained to the special envoy of Release in Tokyo at the time of drawing up a first assessment.

For the Japanese, who lined up four Olympic champions and a bronze medalist on Saturday, this defeat at the end of a week rich in gold will perhaps have an effect comparable to the national drama that followed in 1964, during the first Tokyo Games, the victory in the form of an affront of the Dutchman Anton Gesink against Akio Kaminaga in all categories, the most prestigious.

With eight distinctions in eight days, French judo is at this stage, and by far, the leading provider of medals to the French delegation in Tokyo.