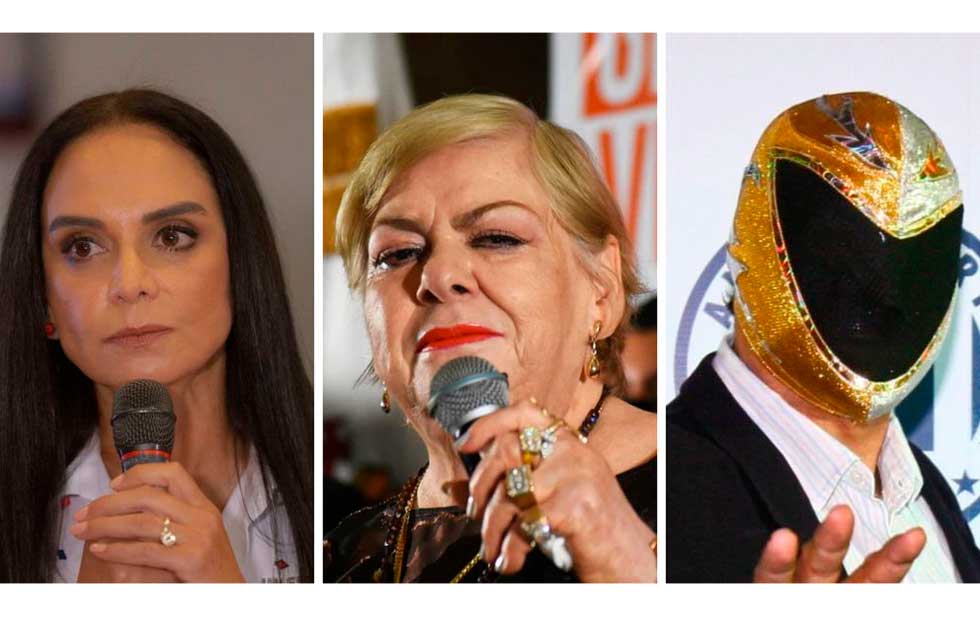 The electoral ballot in the so-called “largest elections in history” was also filled with nearly twenty characters from the world of entertainment and national entertainment, who contended for a popularly elected position, the Infobae portal reported.

However, the vast majority of them could not take advantage of their fame to achieve their mission, and, with political vocation or pure improvisation, several celebrities were left with the desire to hold a citizen position in this period.

By counting the votes of the candidacies for deputies, mayors, or governors in the 2021 elections, the Preliminary Electoral Results Program (PREP) has produced preliminary results that, although they are not the final ones, represent a faithful approximation of the electorate’s preferences.

The actor Alfredo Adame sought from the hand of the Progressive Social Networks party (RSP) the deputation for the 14th district of the Tlalpan mayor’s office, however, with more than 94.87% of the tally sheets, the controversial actor added only 1,119 votes, becoming the last place in his contest with 0.75% participation. Adame was defeated by his ex-sister-in-law, actress Rocío Banquells, who triumphed under the banner of the PRI-PAN and PRD alliance.

Former Miss Universe Lupita Jones ran for the governorship of Baja California with the PRI-PAN-PRD “Va por México” coalition, but before the elections the PRI withdrew its support. In the end, he registered 95 thousand 578 votes, placing third after Marina del Pilar Ávila de Morena, and Jorge Hank from PES.

The Mexican fighter Manuel Leal Navarro, known as Tinieblas Jr., was launched as a candidate for mayor Venustiano Carranza of Mexico City, hand in hand with the RSP party. At the moment he obtained 1,842 votes, or 0.8% of participation.

The driver “Pato” Zambrano sought the local deputation for the district 3 of Nuevo León, hand in hand with the PRD and PRI. She obtained the second place with 27.58% of the votes, against the PAN player Myrna Grimaldo.

The son of José José, the also singer José Joel, looked for a delegation from the PES in the local district 5 of Mexico City. He added just 1,917 votes with 1.43%, losing to Jesús Sesma, candidate for Morena, PT and PVEM, who obtained 51,591 votes.

According to the accounting at the time, Belinda’s brother, Ignacio Peregrín, also lost in the contest in Mexico City as a candidate for federal deputy for the 15th district in Benito Juárez, for which he participated hand in hand with the Morena-PT coalition. – PVEM. It was Luis Alberto Mendoza, candidate of the PRI-PAN-PRD, who was ahead of him in the first place. “Nachito” has obtained 51 thousand 99 votes, while his opponent obtained 170 thousand 721 votes.

The actor and former soccer player Arturo Carmona ran as a candidate for federal deputy for the PRI in the 11th district of Guadalupe Nuevo León. At the moment he obtained 24.1% of the votes, which places him in second place below Pedro Garza, the PAN candidate.

For her part, Francisca Viveros Barradas, the popular Paquita from the neighborhood, obtained 12,816 votes at the cut-off at 2:00 p.m. with an advance of 97.59%. Paquita sought to establish herself as a local deputy in Misantla, Veracruz for the Citizen Movement, obtaining 9.55% of the vote in which Othón Hernández, candidate of the PRI-PAN-PRD coalition, was elected.

Vicente Fernández Jr. competed in the 20th district of Tonalá, Jalisco, for a local council with the PES. Despite having an intermittent campaign, the boyfriend of “the Mexican Kardashian” obtained 1.5% of the votes, that is, 1,663.