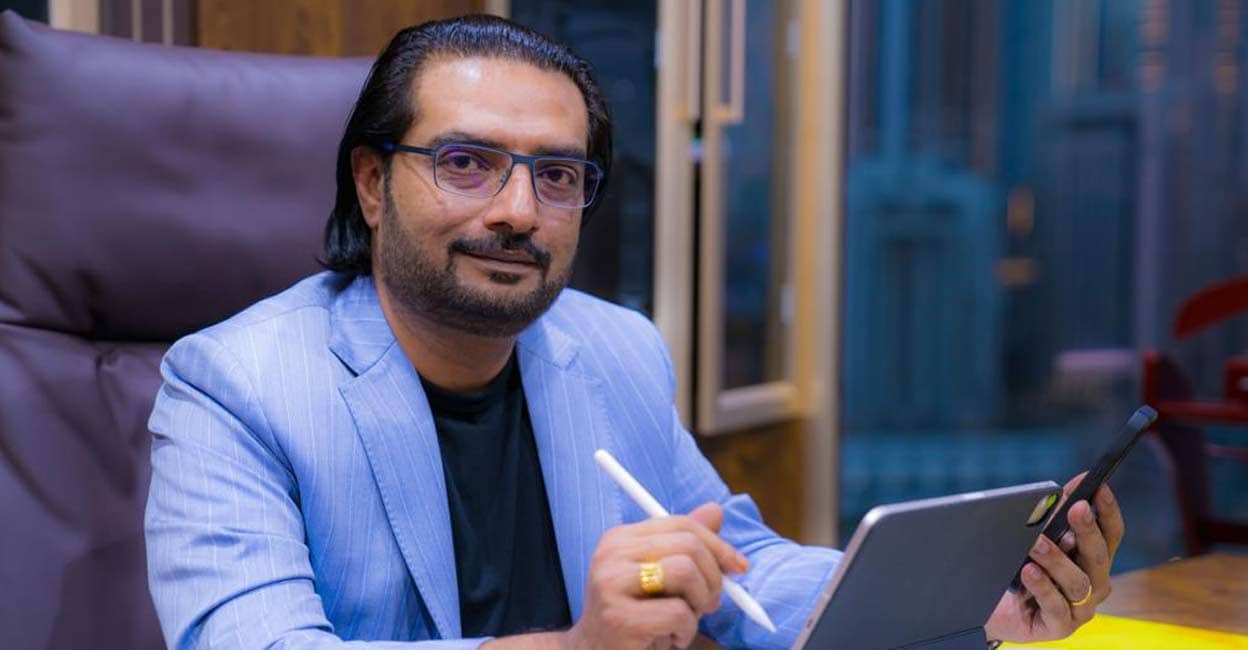 A nuclear medicine physician, Dr. Ajit Joy. Born into a business family, in 2014, he took over the legacy business of DDRC SLR Diagnostic Services founded by his late father Joy Joseph. The business has grown into the largest diagnostic network in Kerala with 240 branches operating directly from 72 units.

DDRC SRL was the first lab in the state to start covid RTPCR tests and played a key role in fighting the epidemic. He later sold his business to IHH Group, a subsidiary of Mitsui Corporation, but Dr. Ajith and his wife Dr. Smitha is also managing. As an artist and a music lover, his love for the arts led to the establishment of Joy Movie Productions, Joy Music, an infrastructure leasing company for film production. Now Dr. Ajith is taking a step into film production after producing four films together.

Vichitram, produced by Joy Movie Productions for the first time, will hit the theaters on October 14. Starring Shine Tom Chacko, Balu Varghese Kani Kushmi and others, the film is directed by debutant Achu Vijayan. After Vichitra, four films such as Mukundanunni Associates, Attam and Charles Enterprises produced by Doctor Ajith are getting ready for release. Obsessed with defeating the menace of cancer that grips the human body like a crab, the doctor steps into new territory by memorizing everything about cinema.

‘Vichitram’ is a crime thriller. Vichitram is Joy Movie Productions’ first film. We have done four films now and the first one is Strange. Shine Tom Chacko, Balu Varghese, Lal, Kani Kushmi, Ketaki Narayan and Jolly Chirayat are the main stars. The film has a newcomer named Vishnu and some other new stars. Vichitra is the story of a mother and her five children. The theme is that they move to their ancestral home and some strange situations they experience after arriving there. The film was directed by a newcomer named Achu Vijayan. He has been working as an editor for a long time. Music composed by National Award winner Vishnu. Vichitram will release on October 14. I say Vichitram is a well made film with good camera and music, family story with funny, mystery and thrilling elements all together. The actors have also acted very well. I am satisfied as a producer. Let the rest of the audience decide.

A to Z of the movie

My production house has started as a studio for doing not only movie production but also coloring studio, camera rental, gimbal and many other facilities for making movies. Joy Movie is the first in Kerala to set up a state-of-the-art digital coloring studio with Blackmagic Advanced DaVinci Resolve platforms, 4K laser coloring projector, an advanced visual graphics animation studio called Iris Pixels, a music channel called Joy Music, and Joy Movie Productions. It also operates in real estate, management consultancies, microchip technologies and healthcare distribution. Along with that, the film is produced and distributed. The concept was to be an organization where the A to Z of film production converged and that is how Joy Movie Productions became a reality. The first film distributed by our distribution company was ‘Jack and Jill’.

Cinema has always been a passion. Due to lack of time, movies are often watched in the home theater at home. Now the big responsibility of film production has been taken up. After Vichitram, the film ‘Mukundanunni Associates’ will be released. The film will release on November 11, starring Vineeth Srinivasan Suraj and others. Vineeth Srinivasan comes in a character that has never been done before. ‘Attam’ is the next film. It is a film made by Vinay Fort, Shajon and a theater group of them. It will be released only after it goes to festivals. Attam is a festival movie or even a technically superior film. The next film is ‘Charles Enterprise’. It stars Urvashi, Guru Somasundaram, Tamil Kalayarasan and Balu Varghese. All the four films deal with four types of theme. All four were shot together. Only after the release of these four will we move on to the next film. Shooting four films together is no small feat.

I am an oncologist by profession.I work in nuclear medicine and cancer treatment. I was the Chairman and Managing Director of DDRC Lab. It is an organization started by my father. Since 2006, it has moved into a joint venture with the Piramal Group. It is the largest single unit in India without a franchise. It has been forty years since DDRC has grown like this. When the covid came, he was with the government to do the covid test quickly. Now I am only a share holder of DDRC. I have now turned to many fields including health. Cinema is one of them. Since 2006, our company has been doing CT Nuclear Medicine Departments at Kims Hospital, Thiruvananthapuram.

He worked first at the Baba Atomic Research Center in Bombay and then at the Tata Memorial Hospital. It reaches Kerala in 2004. Doctors Diagnostic Nuclear Medicine and Research Center was started first. In 2006, we came up with a model where hospitals can outsource high-end imaging diagnostics. Its first operation was in Kims. We still have our DDC lab. My family home is in Kochi. Currently living in Dubai. Came to Kerala for shooting purposes. Most of the time I used to go to the sets when Vichitra was being shot. Many things that come in the making of the film can be seen and understood directly. Art should be seen as art and business as business. I have the habit of taking risks in any business. There is no fear that the film will be successful, there is a strong belief that the audience will decide the final fate of the film when it reaches the theatre.

Periods and circumstances make every system. When covid came the only entertainment was TV. When that happened, more and more OTT channels came into existence. People’s views have changed in two years. More people started setting up home theaters. But not everyone watches on home theater or TV. Most people watch movies on mobile. Some films are thought to be enough to watch when they come on the OTT platform, but some films can be enjoyed only when they are seen in theaters. Such people will need to come to the theater and watch the movie.

Vichiram is a thriller film. The sound is mixed in Atmos Mix. You can enjoy the movie in its full quality only if you watch it in the theater. Now OTT channels are taking movies in a different way than during the Covid era. They are interested in taking movies that have run at least 14 days in theaters. It’s a time when nothing can predict what people will like. We are also seeing some of the most unexpected films that are made without spending a lot of money and become huge hits. We believe that our films will be accepted by the audience.

The BYD Atto 3 shines in the European crash test