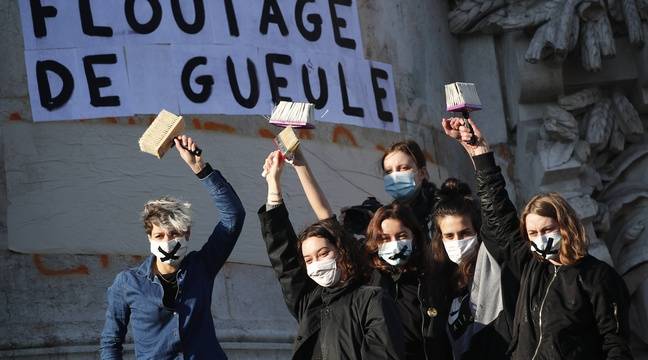 The left on Saturday put aside its differences to demand in unison in the street the withdrawal of the proposed law “comprehensive security” and condemn recent violent police interventions revealed by videos.

“Today, if there is honor, it must be found in the withdrawal of the text and not in its maintenance”, when in particular “the risk is to create incomprehension and violence”, said former socialist president François Hollande to the newspaper The mountain, recalling that he himself had to withdraw a text on the deprivation of nationality in 2016.

Praised by the police unions, supported by the right and the far right, the text arouses an outcry on the left and among the defenders of public freedoms, who see it as “a disproportionate attack” on the freedom to inform and the sign of an authoritarian drift by Macronie, and demonstrated by tens of thousands on Saturday.

Faced with the controversy that divides up to the majority, the government had created an independent commission responsible for rewriting the article, this time provoking the ire of parliamentarians, presidents of the Senate and of the Assembly included, before giving up what ‘it affects the legislative text.

In the Parisian procession, the European deputy EELV Yannick Jadot asked that Emmanuel Macron “hear” the “guarantors of the rule of law” and promote the withdrawal of the bill, also demanded by the First Secretary of the PS Olivier Faure , a moment at his side.

Like the leader of the rebels Jean-Luc Mélenchon, Yannick Jadot called for the departure of the police chief Didier Lallement “who embodies all these liberticidal drifts”, and wanted the General Inspectorate of the National Police (IGPN) to become an organization “Independent”.

Jean-Luc Mélenchon called for a “overhaul” of the police, when Yannick Jadot spoke of a “major republican protection law” for the police.

“The President of the Republic must choose whether he is Darmanin, Lallement, or whether on the contrary he is a Republican who assumes,” said Olivier Faure who does not demand the departure of the prefect but denounces, as MP LFI Adrien Quatennens, an “authoritarian drift” of power.