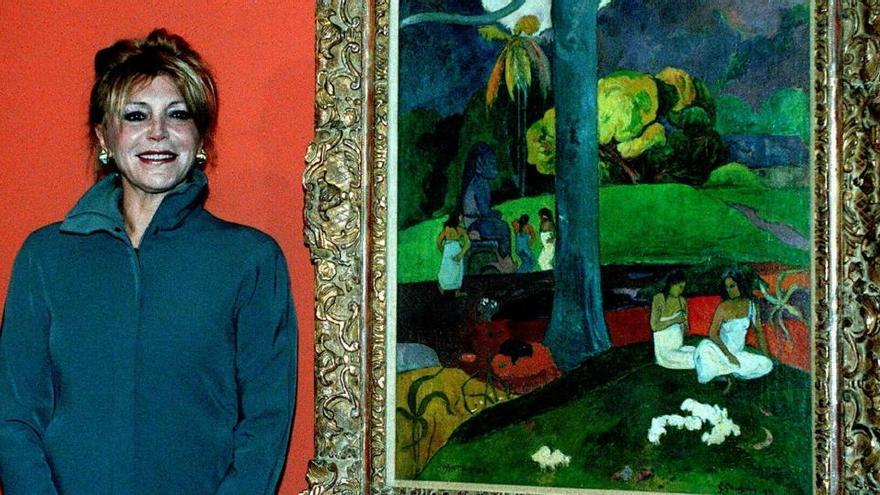 Since it was painted in Tahiti in 1892, the ‘Mata Mua’ has traveled a long journey full of twists and turns: it has passed through the hands of collectors, auctions and museums, until it became one of the hot spots of the negotiation between the Government and Carmen Thyssen that culminated this Friday.

The permanence of the painting in Spain was a red line for the Ministry of Culture, as Minister José Manuel Rodríguez-Uribes told EFE that A deadline had been given this month – until tomorrow – to reach an agreement with the Baroness on her collection. Finally, the pact has arrived almost in extremis.

The life of ‘Mata Mua’ began in Tahiti, where Paul Gauguin (1848-1903) left in search of inspiration, primitive tribes and, also, paradise lost.

When he arrived he realized that paradise did not exist, at least as he imagined it. In fact, the scene from ‘Mata Mua’ (‘Once upon a time’), in which some Maori women worship Hina, the goddess of the moon, never existed, Gauguin imagined it to paint it.

The Frenchman returned from his trip with this and other paintings under his arm and showed them for the first time in an exhibition at the Durand-Ruel Gallery, where he did not arouse much sympathy; his language was too innovative for the time.

Two years later, he would auction it together with other works to pay for another of his trips, this time to Martinique, where he died. Three years after his death, the painting was exhibited at the Salon d’Automne in Paris and went through various galleries and private collections.

Finally landed in the collection of Julius Wolf, a German businessman living in New York. His wife Erna Levi Wolf, who survived him, lived with ‘Mata Mua’ and many other impressionist paintings in his apartment at the Lombardy Hotel until his death (1983).

Shortly after would go up for auction, and that’s where Heinrich Thyssen took a fancy of the. His widow Tita Cervera often remembers how her husband “would get sad if he didn’t buy a painting a week.”

There was another interested party: his friend and also businessman, the Bolivian collector Jaime Ortiz-Patino. In order not to inflate the auction price, the two, businessmen, reached an agreement to buy it half. The price reached 3.8 million dollars in the bid (3.13 million euros), a record for a Gauguin at the time.

They agreed that each one would keep it for a period of 2 and a half years; and at the end of the term -5 years- they would try to reach a new agreement.

1989 came and they couldn’t agree on anything, so the painting went up for auction again. Baron Thyssen competed with two other interested parties and finally kept him, for 24.2 million dollars (19.9 million euros), another record price.

David J. Nash, one of Sotheby’s auctioneers, then assured the New York Times that the tycoon had become used to having eight works by Gauguin in his dining room lent him by the Pushkin Museum for an exhibition.

When the paintings returned to Russia, Hans Heinrich Thyssen set out to buy a Gauguin from his Polynesian times and finally, with ‘Mata Mua’, he succeeded. The same year that he bought it, the baron showed it to the public for the first time at the Reina Sofía Museum in Madrid (1989).

Decades later, the painting would be distributed in the inheritance among the heirs of the family, including Carmen Cervera, who finally stayed with him and is the jewel of his collection.

It was also one of four that was taken from the museum during the state of alarm last year, when the museum was closed due to the pandemic. The episode strained the relationship with the Government, marked for decades by a tug of war to close an agreement on his collection that seems to never come to fruition.

He left for Andorra, where the baroness has a small museum and a bunker to protect part of the collection not showing the public. Days after leaving Spain, the Andorran museum announced its presentation, but the event was canceled days later without much explanation.

Now, ‘Mata Mua’ awaits his next destination in an Andorran bunker.