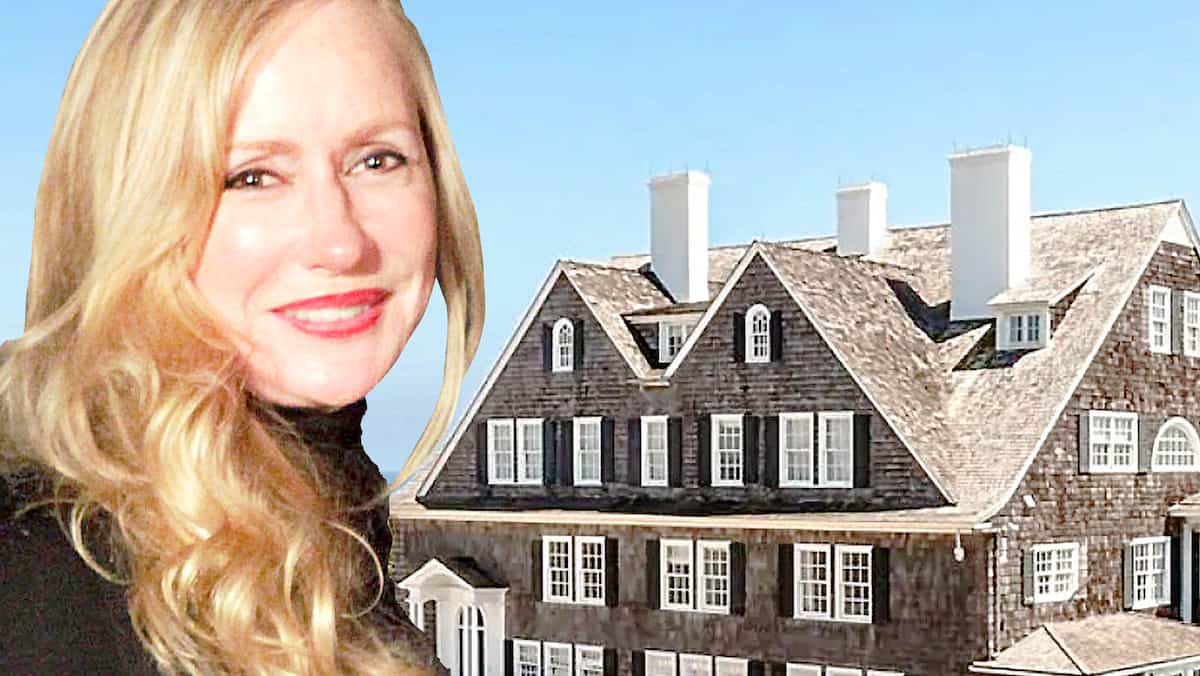 A wealthy businesswoman who owns $200 million in real estate is racking up legal proceedings, particularly in the context of an offer to purchase one of the most expensive houses in Quebec.

Canadian businesswoman Louise Blouin, who in the mid-2000s was among the richest women in the country, has been targeted by at least six recent legal actions in Quebec.

For five years, she has been sued by a bank, a real estate brokerage firm, a law firm, a painting company, a Montreal architect as well as buyers and sellers of luxury residences.

A spectacular house in the Hamptons near New York linked to Louise Blouin also finds itself at the heart of a dispute with creditors (see other text below).

The lawsuits suggest a princely lifestyle for the woman who made her fortune in particular with her shares in Trader Classified Media (the owner ofAuto Hebdo), which it liquidated in 2005.

For more than 15 years, she has devoted a good part of her time to art and the media, with the company BlouinArtinfo Corp, among others. She also rubbed shoulders with some well-known personalities of the jet set.

In 2015, she had her eye on a luxurious Montreal home according to court documents.

With a real estate broker, she drove around Westmount in a convertible, open-top Mini Cooper and attempted to achieve what would then have been the highest residential transaction of the year in Quebec.

She wanted to get her hands on a Victorian mansion with 10 bedrooms and 10 full bathrooms and enjoying a breathtaking view of the metropolis.

The house was then not for sale, but Mme Blouin convinced the owner to sell it to him for $15.5 million after offers and counter-offers.

Mme Blouin, however, never went to the notary to finalize the transaction. The saleswoman, who had meanwhile moved, sued her.

In defense, Mr.me Blouin maintained that she no longer had an obligation to buy because her broker had leaked information to the Journal for the sale of another property in Mont-Tremblant. A reason deemed far-fetched by Superior Court Judge Sylvain Lussier (see other text).

“It is his arguments, his desires, his whims, his taste for grandeur, which come before any consideration for his commitments”, criticizes the judge.

He condemned the businesswoman to pay nearly $2 million, among other things to fill the gap between the price offered and the one that the saleswoman had to finally accept from another buyer.

In addition to having to compensate the Westmount seller, Louise Blouin was forced in February to sell a $5.1 million Mont-Tremblant house to a couple from whom she had accepted an offer to buy (see other text below).

HSBC Bank also sued her and obtained a judgment in her favor for unpaid debts, including a balance of more than $50,000 on a credit card. Statements show in particular expenses of more than $18,000 in five days in businesses in Florence and Paris and a hotel in Switzerland.

WHO IS LOUISE BLOUIN?

– Le New York Post called her in 2016 the “Great Gatsby of the art world” because of her parties organized at La Dune, one of the most prestigious residences on Long Island, near New York.

– She has already been in the entourage of Prince Andrew and Bill Clinton, reported the Globe and Mail in 2005.

– She is the sister of Hélène Desmarais, wife of Paul Desmarais Jr. (chairman of the board of directors of Power Corporation)

► Law firm Gowling LWG also filed a lawsuit last year for unpaid fees of $109,000. She disputed the claim, saying she was not satisfied with the legal services rendered.

Litigation for a $140 million villa

La Dune, a Hamptons estate embroiled in litigation and linked to Louise Blouin, is for sale at Sotheby’s.

One of the most prestigious houses on the American east coast, belonging to a company owned by Louise Blouin, found itself in the last few days at the heart of a showdown with its creditors for debts of US$43 million.

On April 30, Louise Blouin signed bankruptcy proceedings documents for the company Brickchurch of which she is the administrator.

Brickchurch owns one of two houses in a luxurious estate called The Dune in an area that attracts wealthy New Yorkers.

A few days earlier, a lawyer had asked for a delay to avoid the forced sale of the house to do checks and to try to obtain refinancing.

The company headed by Louise Blouin was the subject of a financial recovery procedure initiated by creditors, including a fund from the Cayman Islands, according to documents consulted by our Bureau of Investigation.

The La Dune estate was on sale in 2020 for US$140 million, according to Outeast. It is currently on sale at Sotheby’s for an undisclosed price.

A La Dune bathroom offers a view of the beach and the ocean.

“Considered by many to be the most prestigious oceanfront in all of the Hamptons, this iconic Stanford White-attached estate offers two extraordinary residences on over 4 acres, with over 400 feet of continuous beach,” describe Harald and Bruce Grant on the Sotheby’s real estate brokerage site.

The La Dune complex home owned by Brickchurch is valued at US$63 million in court documents. The other house belongs to another firm related to Louise Blouin, Aberdeen Enterprises, which is also in default.

– With the collaboration of Philippe Langlois

Gone with a bedroom door?

A Cape Cod-type residence in Tremblant had to be sold by Blouin to two buyers.

A luxury Mont-Tremblant home sold by Louise Blouin was left in poor condition when new owners arrived, a lawsuit has claimed.

“The defendant left with the door to the master bedroom, which demonstrates his bad faith, as well as several porcelains, lamps and other items of great value, which demonstrates the seriousness of the gesture”, maintains a couple of buyers in an appeal filed last February at the Saint-Jérôme courthouse.

They are claiming $320,000, in particular for missing or damaged property.

“The missing goods which belong to the plaintiffs and which have moreover been paid for at a high price (including in particular doors, cupboards and built-in elements!) were scattered and taken by members of the defendant’s family and the remainder was sent to Europe,” the suit reads.

Damage would also have been observed after taking possession.

“There was a big water damage in the kitchen, which was not there at the time of the promise of sale”, allege the buyers, detailing the damage to the counters and floors.

The claim is disputed by Mr.me Blouin who call it exaggerated and unfounded.

However, this is not the first dispute between Blouin and the buyers. Earlier this year, the couple won their case to force her to sell her Tremblant home for $5.1 million. She had accepted an offer to buy, but then changed her mind.

“It treats plaintiffs like crooks when they are only exercising their rights,” said Judge Claude Auclair of the Superior Court. The judge also said that Mr.me Blouin intimidated brokers involved by threatening to have them stripped of their licenses because she is a powerful person.

A mansion that Louise Blouin wanted to buy was described by the media as “the Downton Abbey of Westmount”.

Businesswoman Louise Blouin is said to have aborted a transaction aimed at acquiring one of the most beautiful houses in Westmount because she feared for her tax status, she who has lived in Switzerland for several years.

In 2016, she tried to buy the luxurious residence for $ 15.5 million before changing her mind. The seller sued her and won nearly $2 million in damages.

During the legal proceedings, the veil was lifted on a confidential note sent by Blouin to the notary in charge of the transaction, the evening of the date scheduled to finalize the sale.

“Due to an indiscretion on the part of my broker, we have decided not to proceed with the acquisition [de la maison de Westmount], because it would be too compromising for my tax status. This is strictly confidential,” she wrote to the notary.

Mme Blouin, although a Canadian citizen, is currently a resident of Switzerland, she said during discovery last year.

According to what emerges from a judgment, the businesswoman would have taken umbrage ata column in Le Journal in 2016 who would have drawn attention to her.

The article reported on his purchase of another house in Mont-Tremblant for $5.8 million. She then suspected her broker of having leaked information when this information is available in the public registers.

According to her, this column would have led to another article in the Toronto Star on his presence in the Panama Papers.

“These items that have circulated all over the world have lifted the veil on me in Canada and therefore this purchase would be compromising,” she explains to the notary.

Another “serious reason” for not concluding the transaction is mentioned in the note, but has not been disclosed.

A few months earlier, his name had appeared in the Toronto Star, which reported his presence in the Panama Papers.

This media leak revealed the identity of hundreds of people and companies that used the services of a Panamanian law firm to make investments in tax havens.

“Pico Zheng Jun’s “We Are” VR Private Singing & Chat” will be sung on May 17, sharing a 360° immersive dance experience.

They asked the artist, Menna Fadali, about the reason for her divorce after only 6 months of marriage.. She revealed the dangerous secret that she kept from everyone!