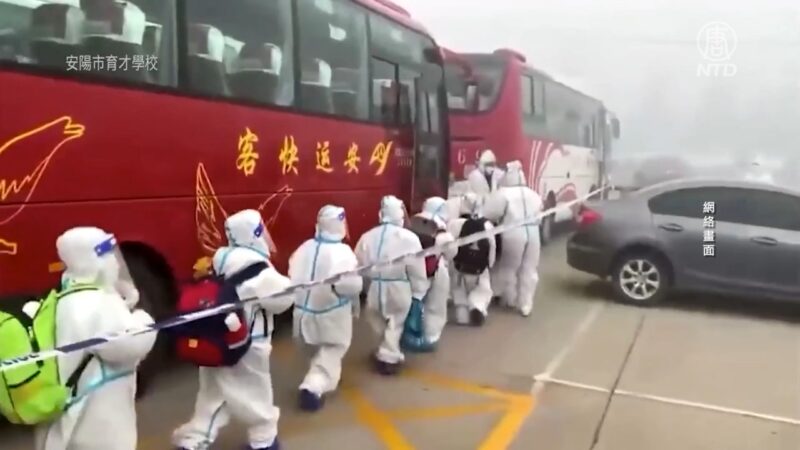 [NTDTV, Beijing time, January 12, 2022]First, let’s pay attention to the epidemic situation in China.HenanInfections were found in Anyang, Xuchang and Zhengzhou in the provinceOmicronandDelta‘s case. Currently, the three cities are still in the outbreak stage. The epidemic in Anyang has the risk of cross-provincial transmission.

January 8th,HenanAmong the confirmed cases found in Tangyin County, Anyang, was a college student who returned from Jinnan District, Tianjin. He arrived at Anyang Railway Station by train on December 28 last year and was picked up by his father. His sister is a language teacher at Tangyin Yucai Middle School, where several boarding students also tested positive.

Local official media said that from January 9 in Anyang, primary and secondary schools and kindergartens in the city will stop attending school. Yucai School closed-loop transfer of 4,040 people.

Ms. Lin, a resident of Guxian Town, Anyang City, Henan Province: “The college student is Dazhuzhuang Village, which is only one kilometer away from Guxian Town, especially close. Now Guxian Town belongs to the first-level prevention and control, and now all stores are not allowed to open, so they are isolated at home. No one is allowed to go to the streets, the whole city of Anyang, the whole city of Anyang has been sealed off, so all factories have stopped production, and all motor vehicles are not allowed to go on the road.”

this meansOmicronThe mutant strain has been spreading in Anyang for about ten days.

Ms. Lin: “This virus was brought from Tianjin, and it spreads too fast. But if you buy vegetables now, you can’t basically buy them, because it’s the third day after the store is closed, and there’s basically nothing left to grab. , there’s nothing left.”

At present, many passenger trains in Anyang and Puyang have been suspended, and Handan, Hebei and other places are also looking for close contacts.

The staff of Anyang Bus Station in Henan: “Anyang has been closed down, what else is there? (short- and long-distance passenger transport) there is nothing left. At present, I don’t know about the high-speed rail. , are closed, and the West Station is closed.”

In Yuzhou City, under the jurisdiction of Xuchang City, Henan Province, people lined up next to each other for nucleic acid testing. Local infections are still climbing.

A staff member of a hotel in Xuchang City, Henan Province: “Today, we received a group of medical staff who came back from Yuzhou. They must not be able to receive other individual tourists. Larger hotels (Xuchang) are basically requisitioned. We The words here have always been controlled, except for those with a pass, other motor vehicles are not allowed to go on the road.”

along withDeltaThe virus spread in Xuchang and Zhengzhou, and Omicron broke out in Anyang. Some virologists worry that there is a risk of superimposition and simultaneous transmission of the two viruses in the future.

Many people make this mistake after recovering from “Cove”.