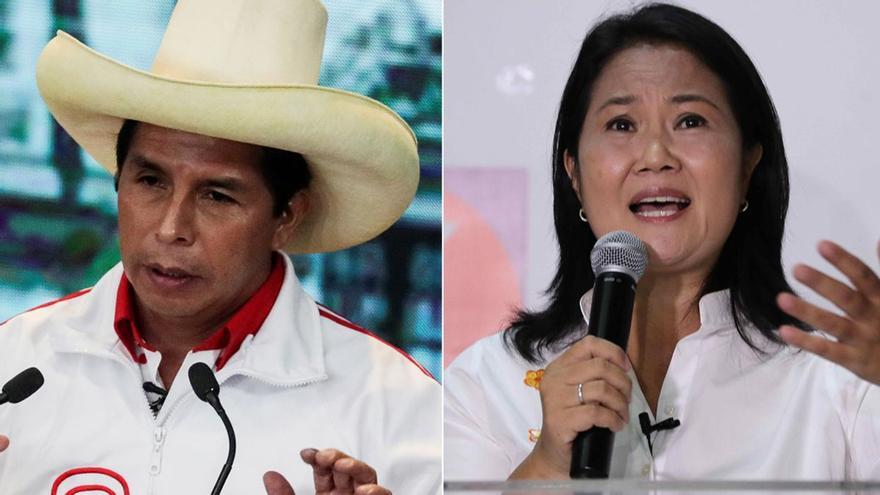 Keiko es Fujimori. Peruvians never forgot that lineage, not even part of those who voted for it in this second round, not suitable for the heart, such as a “lesser evil”. But a few days after apologizing for his past mistakes before the legal blessing of Mario Vargas Llosa, the candidate of Popular Force recovered its original version and reported, without evidence, “evidence of fraud” that benefit your rival, Pedro Castillo. He did it when 4% of the votes have yet to be counted. When almost 96% of the minutes were scrutinized, the left-wing teacher obtained 50.20% of the votes, against Fujimori’s 49.79%. The fight between the contestants will be head to head until the National Office of Electoral Processes (ONPE) announce the name of the next president. However, Fujimori decided to break his commitment to wait prudently for the verdict at the polls and added a high dose of political tension to the outcome.

The accusation was rejected by the international missions that observed the development of the elections last Sunday. The delegation of the Organization of American States (OAS) highlighted the peaceful nature of the elections and asked the competitors to ““his” democratic attitude “prevails. The OAS also recalled “that they are still pending to process records at the national and foreign level, as well as the records observed.” Iván Lanegra, Secretary General of the Transparency Civil Association, He also dismissed outright the assertions of the jailed autocrat’s daughter: “A fraud involves a set of systematic and generalized actions that significantly affect the electoral result. Five cases, which have to be duly investigated, do not under any circumstances imply an indication allowing us to use the word fraud. ”

Alvaro Vargas Llosa, the son of the author of ‘The city and the dogs’, tried to rewrite the words of the Popular Force candidate. “I have not heard Keiko Fujimori or his vice presidential candidates accuse electoral bodies of electoral fraud. The warnings, very justified, have all been against the mafia methods that Peru Libre he is using to circumvent the popular will, not against the ONPE, “he said. For her part, Patricia Juárez, candidate for the second vice presidency by Fuerza Popular, reiterated that this party” will respect “the results” once it has completed the process of last vote count “.

Castillo avoided controversy: “we must be vigilant to defend the democracy that is expressed in each of the votes. May this historic vigil allow the rebirth of a new country. ”

The truth is that, to the uncertainty of a slow count and the frictions of a polarized society, a quota of tension has been added from which part of Peruvians believed they were safe. “What is the strategy behind the fraud complaint? It seems to point to the fulfillment of the self-prophecy of excesses in the streets that they strive to provoke, without evaluating the tragic results that could be unleashed, “said the newspaper The Republic in your editorial. “A country divided and at odds was slowly recovering and patiently obeying the call for calm. Few attempts to protest were controlled, without reaching greater numbers. Unfortunately, the stone of fraud has been thrown.”

The nervousness will not dissipate immediately, among other reasons because the count of the ballots that come from abroad, and that could favor Fujimori, will last for several days, according to the newspaper Management Peruvians authorized to vote outside the country represent 3.94% of the total electoral roll.

In this context, the price of the dollar has skyrocketed and the Lima Stock Exchange collapsed. The depreciation of the sol, the national currency, has begun to impact some products in the popular basket, such as chicken, eggs, corn and bread. For some media outlets in the capital, the ups and downs in the market are signs of fear about the possibility of a victory for Castillo. These threats flew over the entire election campaign and they intensified again in the middle of the count.

No truce for the victor

In 2016, Keiko Fujimori lost the presidency to the neoliberal economist Pedro Pablo Kuczynski for just 0.24% difference. His party, Fuerza Popular, was the majority in Congress and it did not take long to claim the head of the winner, without a bench that could defend him. History could repeat itself if Pedro Castillo beats her, again, by a very limited margin. With the added aggravation that the teacher is in the political antipodes of Fujimori. “The so-called honeymoon that newly elected leaders usually enjoy – that is, the grace period that the population grants to any new head of state to try to put their initiatives into practice – will therefore be very short. or it will not exist at all, “said the Lima newspaper Trade, and not only in reference to Castillo. The winner of this contest, whose outcome is still uncertain, will not be able to “enjoy the sweet taste of triumph“and” he will soon know the troubles that arise from having achieved his goal in a particularly tight manner. “The economic crisis, with 30% poverty, and the brutal effects of the pandemic will aggravate the circumstances of polarization.