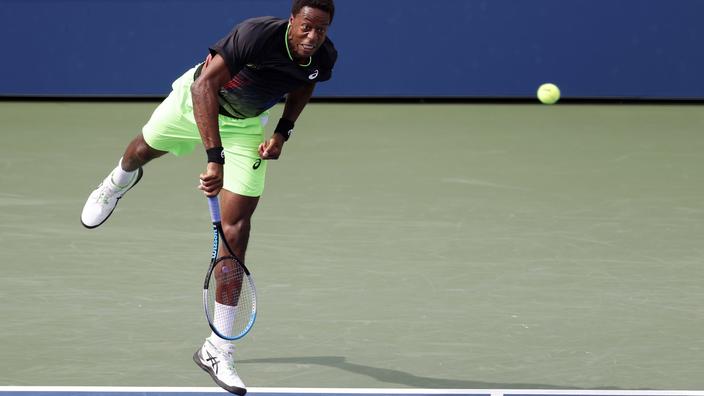 The French n ° 1 relaunched by consistent weeks has found the pleasure and the path to victory. At 2e round of the US Open, this Thursday he will be opposed to the American Steve Johnson.

In tears, to pieces in February at the Australian Open after his brutal elimination at 1is turn against the Finnish Emil Ruusuvuori, Gaël Monfils shared the extent of his dismay. Unable to regain success, to transform what he was working on in training, he promised to work hard, hoping to get back in the saddle.

On the road to New York, the French n ° 1 once again experienced lows but he was able to hang on to manage to draw a clearing and accompany his honeymoon. In passing words of encouragement, such as those sent by the American Frances Tiafoe who lost in the round of 16 against the French in Toronto, in August: “I admired you when I was a child, I want to see you play for many more years.»

At 35 (this Thursday), Gaël Monfils takes up the challenge of climbing the stairs. Jo-Wilfried Tsonga (injured right calf and forfeited at the last moment at the US Open), Richard Gasquet (eliminated in 1is turn by Daniil Medvedev) and Gilles Simon (contact case and private participation in the last Grand Slam of the season) see more and more regularly the weight of the years falling on their shoulders and posing insurmountable obstacles to their ambition, Gaël Monfils has , in recent weeks, recovered (he thus stood up to Andrey Rublev in the round of 16 in Cincinnati).

He is preparing, this Thursday (scheduled for match n ° 3 on the Louis Armstrong court, not before 9 p.m.) to defend the colors of a decimated French delegation. The last blue chances in New York resting in fact, in singles, on Corentin Moutet and Fiona Ferro. The French n ° 1 will be opposed to the American Steve Johnson (87e world), against whom he has never lost in the three duels between them.

Eliminated at 2e round at Roland Garros and Wimbledon, Gaël Monfils wishes, at Flushing Meadows, to confirm the interview promises (quarter-finalist in Toronto, eighth-finalist in Cincinnati) to seal the expected consistency. And not to be satisfied with animating the networks with dance steps or extracts of the most spectacular points registered during his career.

Gaël Monfils wants to combine with the present. In New York, he entered the tournament confidently, dominating Argentina’s Federico Coria 6-3, 6-2, 6-2 (the younger brother of Guillermo, a Roland-Garros finalist in 2004), even though he let slip 30 unforced errors.

At Flushing Meadows, Gaël Monfils loves heat, fervor, he signed some of his best Grand Slam tournaments (quarter-finalist in 2010, 2014 and 2019; semi-finalist in 2016), he could pick up the rewards the efforts made over the last few months spent in the shadow of the results, escorted by questions turning to obsession when it has been necessary to rebuild almost everything. Unpredictable, Gaël Monfils has, throughout his career, evolved on a thread. In recent months, he has endured the fragility of reconstruction. He rediscovered the taste for competition. A force that allows him to run diligently after the spark that French tennis really needs …