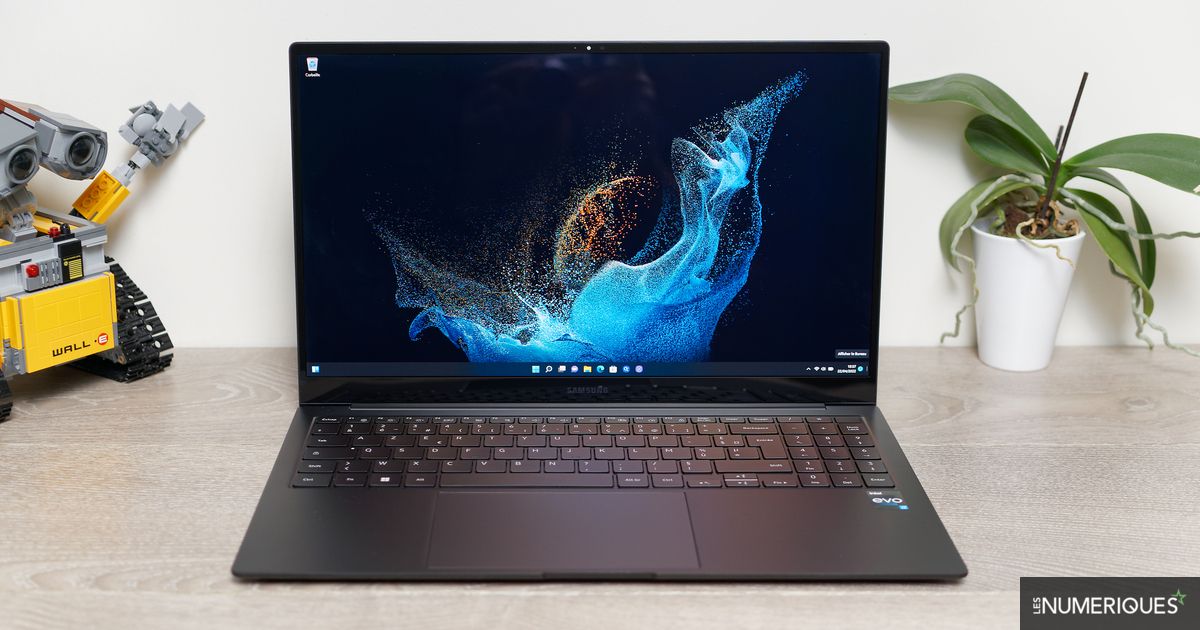 The design of the Galaxy Book2 Pro 15 is particularly sober in its black version. Very monolithic in appearance, its chassis is slightly slimmer at the front. The aluminum cover sports a sandblasted finish similar to that offered by Apple on its MacBooks. The rest of the chassis is plastic, with a piano treated against fingerprints. Despite its thinness and featherweight, it benefits from convincing rigidity. It is thus more rigid than the LG Gram 16without however reaching the level of an all-aluminum chassis of a MacBook Pro d’Apple.

The opening of the cover reveals the Amoled panel with a glossy finish. This takes place in a particularly shiny plastic frame, but with thin borders.
The backlit keyboard is adorned with a three-column numeric keypad with a start button in its upper right corner which also acts as a fingerprint reader. The typing on the keyboard does not suffer from any defect. The keys are very slightly curved and the quality rendering.
The large touchpad is in the same vein, with a smooth glide and Windows gestures with 2, 3 or 4 fingers perfectly taken into account.

The connection is varied and will satisfy all users. There are two Thunderbolt 4 ports and an HDMI 2.0 port on the left side, a USB 3.0 port, a mini-jack socket and a microSD reader on the other side.

For wireless connectivity, Samsung did not bother and chose the Intel AX211 chip compatible with wifi 6E with a cumulative speed of 2.4 Gb / s and Bluetooth 5.2. The 720p webcam located above the screen, on the other hand, does no miracles. It lacks detail, even in good lighting conditions.

The Book2 Pro 15’s cooling system is made up of two fans and two radiators connected to a heat pipe that draws heat away from the 12th Gen Intel processor. After just over 15 minutes of coding, we noted a maximum temperature of 52°C above the function keys; the keys in the center of the keyboard are around 41°C. The temperature is a little high, it must be recognized, Samsung having favored silent operation, even in so-called Optimized mode, since the noise pollution does not exceed 34 dB. You could use the Book2 Pro 15 in a library without people on the next table noticing. If you want to benefit from more consistent cooling and lower temperatures, you have to switch to Performance mode which frees up the rotation speed of the fans; the noise then rises to 40.5 dB.

Dismantling the Galaxy Book2 Pro 15 is at first glance simple: 4 Phillips screws under removable pads hold the shell. However, the removal of the shell is particularly painful. You have to find a lever at the hinges then individually release each of the retaining clips which are spaced 2 or 3 cm apart.

Inside, only the battery and the SSD are removable. The RAM is soldered on the back of the motherboard and the wifi chip on an auxiliary board. Note in passing the presence of a second M.2 port, free, to add an SSD to the right of the right fan.

The Samsung Galaxy Book2 Pro 15 is equipped with the Intel Core i7-1260P processor accompanied by 16 GB of DDR5 RAM and a 512 GB SSD. This hybrid processor is made up of 4 so-called “performance” hyperthreaded cores and 8 so-called “efficient”, all for a thermal envelope of 28 W. During our encoding, the P-cores operated at an average of 2.37 GHz, with peaks at 4.7 GHz, while the E-cores stabilized at 1, 96 GHz average, with a maximum of 3.4 GHz.

In all of our tests to determine the performance index, the Samsung Galaxy Book2 Pro proves to be a little faster than the ZenBook 14 Oled d’Asus yet equipped with the same processor (115 against 108). This is explained by a more aggressive setting on the part of Samsung, with an envelope of 51 watts authorized for 28 seconds – against 28 watts during the same period of time for the Asus – before stabilization at 28 watts.
The Samsung Galaxy Book2 Pro 15 drops the LG Gram 16of comparable dimensions and which stagnates at an index of only 73.

On the other hand, the performance of the on-board SSD is nothing extraordinary, Samsung having chosen a model that seems reserved for assemblers. Thus it reaches 2.29 GB / s in reading and 1.2 GB / s. If in practice this is more than enough for everyday use without slowdowns under Windows, users who would add a second, faster SSD would be limited by this original SSD when transferring between the two storage units.

A word about the modes integrated by Samsung. There are 4 of them: Silent, Discreet, Optimized (by default) and Performance. To change mode, you must perform the Fn+F11 key combination. In use, Silent mode is the only mode that significantly reduces performance (-10%); however the fans remain perfectly inaudible. We didn’t notice any noticeable differences between Quiet mode and Optimized mode. As for the Performance mode, contrary to what its name suggests, it does not improve performance, but allows you to unleash the rotation speed of the fans. The PC is then better cooled, but also noisier.

Logically, it is in its production lines that Samsung drew the screen that equips the Galaxy Book2 Pro 15. And it did not choose anything, since there is an Amoled panel of 15.6 inches Full HD (1920 x 1080 px) at 60 Hz. The manufacturer has therefore remained relatively conservative by using a simple Full HD panel without HDR and with a very classic refresh rate.

Under our probe, the colors of this panel are particularly faithful. Its Delta E of 1.3 is well below 3, the threshold below which the eye no longer perceives colorimetric drifts. Due to the design of OLED panels, the contrast is almost infinite and the reaction time almost zero.
The color temperature (7248 K) is on the other hand slightly higher than the video standard (6500 K) and is therefore slightly blue.
The maximum brightness of 398 cd / m² does not break the ceiling, but is in the average of the PCs recently tested.
Finally, the anti-reflective treatment is very good since its reflectance rate is only 28.2% on this glossy panel, not very far from that of matte panels, which is below 20%.

With such measurements, Samsung could have compromised on battery size, but not at all. The father of the Galaxy managed to house a 68 Wh battery allowing the Book2 Pro 15 to last for 10 h 30 min under our usual protocol (reading Netflix under Chrome, screen brightness calibrated at 200 cd / m²). A performance to salute, especially since it does better than the Asus Zenbook 14 Oled (8 h 40 min) equipped with the same processor with a 75 Wh battery. So it should be quite possible to last a full day away from a charger or power bank.

How does grading work?

The Samsung Galaxy Book2 Pro 15 ticks almost all the boxes: its impressive chassis makes no compromises, whether on performance or autonomy, and the screen is very well made, with faithful colors and an effective anti-reflective treatment . We simply regret the definition of the panel lower than that of the best laptops on this point.

Chapter 51 of MasterChef Celebrity on April 28