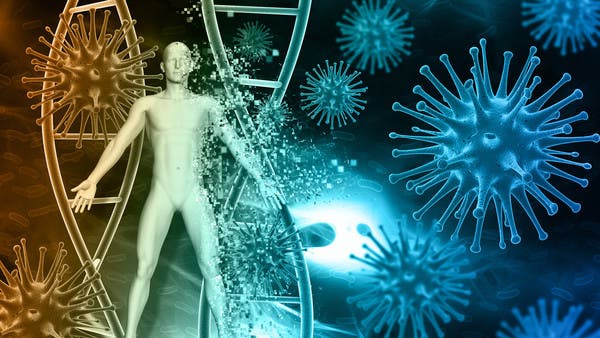 As studies continue to reveal the behavior of Corona VirusScientists at the University of Glasgow’s Center for Virus Research in Scotland have identified a gene that affects how hard a person can tolerate a Covid-19 infection.

At the same time, the researchers, whose study was published in the journal “Science”, warned of the risk of the emergence of new strains of the Corona virus, ignoring the natural protection that this gene provides for some people.

The study also pointed out that one of the types of proteins that are produced in the body using the “OAS1” gene is able to effectively identify the “SARS Cove 2” virus, and prevent the severe course of the disease.

The OAS1 gene, known to science, initiates a cycle of processes that activates ribonuclease L, an enzyme that destroys viruses that have entered the cell and stimulates immune responses to fight infection.

However, the authors of the study point out that according to the “instructions” in “OAS1”, one of two isoforms of the protein that recognizes viruses and triggers an immune response can be produced, short “p42” or long “p46”, and only the latter is effective against the coronavirus. Which caused the epidemic, in which a special group of molecules is attached to it, which facilitates the interaction of the protein with cell membranes (these are called prenylated proteins).

Also, the study indicated the importance of noting that the pre-expression of “OAS1” is associated with protection against severe forms of “Covid 19″, and this indicates that this immune mechanism serves as an important component of the protective antiviral response.”

In Africa and Europe

These results were obtained based on the study of the genomes of 499 people who were hospitalized with the Corona virus in 212 of them, the body did not produce “p46”, and among this group, the risk of death and admission to intensive care was one and a half times higher than the other group.

They also indicated that not everyone has the gene variant responsible for producing the isoform “p46”, which recognizes well the elements of the structure of the Corona virus, as researchers indicate that it is more prevalent among the peoples of Africa and immigrants from this continent than anywhere else, and they stated that Less common among the inhabitants of the capital of Peru, Lima (11% of cases), and to a greater extent among representatives of the Ishan people in Nigeria (70% of cases). While the Europeans are in second place.

Scientists are of the view that the susceptibility of many populations to COVID-19 may depend precisely on the prevalence of the “appropriate” variant of OAS1 in the population.

As Professor Sam Wilson, head of the Glasgow Virus Research Center, stresses, it is possible that the Covid-19 virus will learn over time to bypass this defense mechanism, which it has never encountered before. The OAS1 gene is not present in the putative primary carriers of SARS-CoV-2. Horseshoe bats.

And the British television channel “ITV” quoted Wilson as saying that the research “showed that the coronavirus that caused the SARS outbreak in 2003 had learned to stay away from OAS1, noting that new mutations from “SARS-Cove-2” if you could master it. This ploy may become more capable of infection and will spread more easily among the unvaccinated population, which saw the need for continuous monitoring for the newly emerging “SARS-Cove-2” mutations.