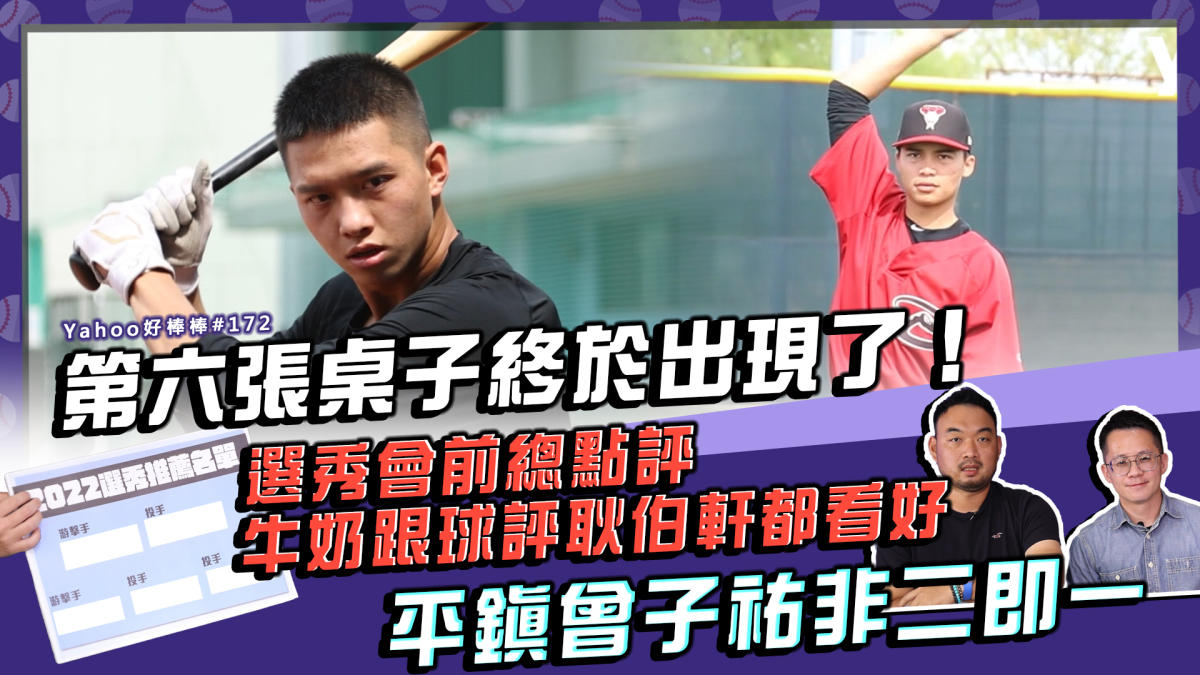 In this year’s Chinese Professional Baseball Draft, the fans and the team were a little disappointed because there were not too many bright players. However, at the last minute, many foreign players decided to return to Taiwan to show their skills and join the July this year. In the draft on the 11th, this episode of Yahoo’s great host “Milk” Wang Yigen and ball commentator Geng Boxuan will show you the players recommended by this draft.

Zeng Ziyou, an infielder from the famous baseball school Pingzhen High School, because of his excellent defensive ability, he can handle any difficult field with ease, giving him the reputation of “Jiang Kunyu”. The solidity of hitting and the use of wrists are quite good. Geng Boxuan also explained in the program that with Liu Jihong’s striking ability, coupled with Jiang Kunyu’s defensive stability, may be the cornerstone for the Taigang Eagles to build the team’s second-tournament defense.

Zeng Ziyou, who was identified as this year’s No. 1 or No. 2 candidate by “Cha Cha” Peng Zhengmin, used to be able to hit long hits and execute tactics when the team needed them when he was in Pingzhen. However, if he is transformed to strengthen his hitting power in the future, his ability will never be improved. Lost to senior Liu Jihong.

Lin Kaiwei, the “instant combat power”, has a major league-level slider in the line-up draft

Lin Kaiwei once voted for the 2A level of the MLB Arizona Diamondbacks in 2022, but was released in May this year due to team planning, which made him decide to submit the registration form and enter this year’s secondary professional draft. .

The fastest ball speed is 95 miles (about 153 kilometers), and with a slider of nearly 140 kilometers, he also caused another foreign player Lin Ziwei to miss the bat in the test meeting at the beginning of this year. He is a real major league player. A certified player, and Geng Boxuan also mentioned that for a team lacking a Terminator, Lin Kaiwei will be a very important immediate combat force in the second half of the season, and perhaps Wei Quanlong can be considered carefully.

Together with Zeng Ziyou, he supported Huang Yong’s pass from the infield and center line of Pingzhen High School. Attack stability and bat control are his biggest advantages. Whether it is bunt, running and hitting tactics, or when there is no one on the base, he can contribute to the team. , is a fairly competent second-ranking candidate, coupled with solid second base defensive skills and good lateral speed on both sides, he will not even lose to Zeng Ziyou, which also makes Geng Boxuan think that Huang Yong’s biography has “red turtle” Chen Jianghe shadow.

Although many scouts believe that Huang Yongchuan is more suitable for the second base position, he also served as the third base and shortstop in high school. If the team needs it in the future, I believe he can also take up the heavy duty of defense.

Body is not a problem, “giant guerrilla gun” Zhang Jielun’s attack firepower should not be underestimated

The shortstop Zhang Jielun is 172 cm tall and weighs 80 kg. He is a shortstop from Xingda affiliated agriculture. His sturdy body does not look like a traditional guerrilla at all, but he has a ball speed of 140 kilometers. In the baseball competition, he won the best batting award (batting rate: 0.650), RBI award (11 points), best ten award (shortstop) and many other awards, and according to the trainer, just give Zhang Jielun a little time to transform The figure, combined with the innate athletic ability, will definitely be able to make contributions for the team at critical moments.

With an excellent body of 188 cm and 80 kg, with a 150-kilometer speedball, cross ball, change-up ball and a slider similar to Carter’s ball trajectory, Paul Huang has always been a reassuring No. 1 candidate for Pingzhen High School, and With experience in many competitions such as the black panther flag and U18 competition, it may be an indispensable immediate combat candidate for a team that lacks a starting pitcher.

Huang Jiehan from Chengde High School has a good ball speed of about 145 kilometers, and after adjustment, the fluency of his arms swing has increased, which makes the overall shot feel better. With a speedball of 147 kilometers, and the ability to control the changing ball is excellent, I believe that both of them will be good starting candidates for the team in the future.

The explosive power of the attack is astonishing, and the arm strength of Song Jiaxiang of the “heavy artillery tower” is also of the same standard

Although it is difficult to develop a catcher, and in recent years, high school catchers need time to hone, but Song Jiaxiang, a heavy artillery catcher from Gu Bao’s family business, has a certain ability to strike, regardless of body size, swing speed, initial speed, etc. Passing arm strength is of a certain level, but his ability to block the ball, catch the ball, and steal good balls is a bit of a pity. If this aspect is strengthened in the future and the team develops, Song Jiaxiang will definitely become a stable commander of the military. official.

Song Wenhua, a foreign pitcher, was once promoted to the 3A level, but because of his unsatisfactory performance, he dropped to the high-level 1A. Although he recently posted 13.2 innings in 11 games, 1 relay, 1 rescue, 15 strikeouts, The defense rate was 1.98, but in the end, due to family factors, he reluctantly gave up his dream of traveling to the United States and ended the San Diego priest’s guest-host relationship for about 7 years.

Song Wenhua impresses everyone the most. When he was the Chinese training team in the U23 World Cup, he scored 4 games and 8K against the Yomiuri Giants. Although the speed of the ball has been declining recently, he is good at it. The curve ball, slider, cross ball, and Carter ball can also strike out opponents at critical moments, so Song Wenhua must be a hot backup reinforcement for each team.

👉Racing Knowledge + “In seven minutes, you will understand the Kinkana National Racing that you can also see in Taiwan.

Worrying about the spread of the new virus, the number of hospitalized patients with secondary infection has increased sharply, and non-emergency services have been suspended or suspended