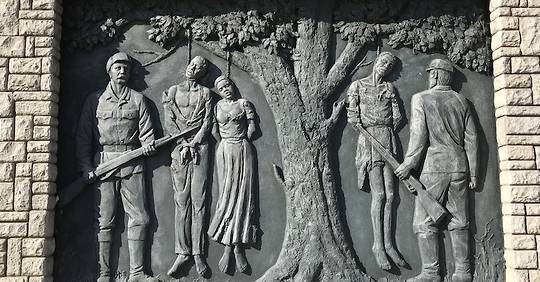 Lrecent “Joint declaration” Namibian and German governments on the genocide of 1904-1908 marks the first time that a former colonial power has formally apologized to another country for state-sponsored mass crimes. The agreement stipulates that Germany will contribute 1.1 billion euros for development projects in Namibia over the next thirty years. Some experts see this agreement as a potential model for postcolonial reconciliation efforts that might be undertaken by other former colonies and colonial powers.

However, the negotiated compromise has glaring shortcomings due to its excessive caution aimed at avoiding any legal consequences for Germany which could set a precedent. It also shows that the limited participation of representatives of the Namibian communities most affected by the genocide hinders true reconciliation.

But bilateral agreements between governments – like this one – are not enough to consider that a true decolonization of relations between peoples has taken place.

The agreement is the result of long negotiations between Germany and Namibia. It builds on previous statements, such as the speech given in 2004 by the German Minister for Economic Cooperation, Heidemarie Wieczorek-Zeul, on the occasion of the centenary of the battle of waterberg, which marked the beginning of the genocide. She then admitted that what had happened was “a war of extermination […], what is called today a genocide ”, before declaring:“ Forgive our offenses and our guilt. “

More than ten years later, in mid-2015, the German Foreign Ministry recognized that the war of 1904-1908 was assimilated to genocide. At the end of that year, bilateral negotiations between the two governments were initiated. But these have not ceased to stumble on some stumbling blocks.

Fearing possible consequent legal obligations, Germany wanted to negotiate on the format of its apology to Namibia. She was reluctant to use the term “genocide”. And she always refused to accept that of “reparations”.

A few years earlier, in 2011, the first progress had been made in taking into account the colonial atrocities with the first delivery by Berlin to Namibia of human remains of genocide victims. Skulls and other human body parts had been taken to colonial Germany for anthropological anatomical studies which then contributed to the “Racial science” Nazi. Subsequently, many other opportunities for meaningful reconciliation were missed.

There are great fears that any agreement will have possible legal implications, could set a precedent for Germany and other former colonial powers. They fear to open the door to repairs. From Germany’s point of view, this also applies to the claims of Greece, Italy and Poland for compensation for the mass atrocities committed by German soldiers during World War II.

The recent compromise negotiated by Germany and Namibia avoids such a “trap” for Germany and the other former colonial powers.

READ ALSOGermany recognizes genocide in Namibia for the first time

Too little, too late

Germany’s commitment of 1.1 billion euros to development projects in Namibia is too low a price to pay for its remorse. In comparison with the lasting human costs and the material damage caused in Namibia, this commitment is purely symbolic and even insulting, as has been said. this Vekuii Rukoro, “supreme leader” of the Ovaherero.

For the Namibian government, this sum is tempting. After all, the country’s economy is plunged into a deep recession. The Covid-19 epidemic has worsened the budget crisis. Such a financial injection would therefore be useful, especially at a time when the trust in government is eroding. The money is intended for land reform and development, rural infrastructure, energy and water supply, and education.

German President Frank-Walter Steinmeier is expected to visit Namibia to demand an apology from the National Assembly. But such official engagement at the political level cannot replace a direct exchange with the descendants of the most affected communities, who have threatened to welcome the German president. by demonstrations.

Following the conclusion of the negotiations, the German Foreign Ministry issued a official statement. He stressed that the recognition of the genocide did not imply any “legal demand for compensation”. On the contrary, this “substantial program […] for reconstruction and development ”was announced as a“ gesture of recognition ”for Germany’s misdeeds.

However, it is questionable whether “gestures” constitute an adequate form of recognition. Such formal language can be very demeaning and hurtful. Given the scale of the crimes committed at the time, showing more empathy would be an important signal. Reconciliation requires more than material compensation. The devastating demographic and socio-economic consequences of genocide can never be offset. Significantly improving the well-being of the descendants of victims would have an important material dimension. And that requires more than the proposed payments.

The same goes for the adequate expression of remorse to recognize a historical injustice. The “joint declaration” states that the Namibian government and people accept Germany’s apologies and believe that they pave the way for lasting mutual understanding and the consolidation of a special relationship between the two nations. Without consultation or legitimacy to do so, the two governments are here stating what the Namibian people are supposed to accept. Notable fact: even representatives of three Ovaherero royal houses who had participated in the last round of negotiations indicated on their return home that they would not approve the proposed deal.

What true reconciliation would require

After a long and laborious process, Germany finally made significant progress in dealing with the Holocaust atrocities of European Jews during WWII. The memory of this event is now part of Germany’s DNA. The holocaust memorial which is in the center of Berlin testifies to this.

Germany has also achieved some reconciliation with neighboring France and, to a lesser extent, with Poland for its crimes during the war.

Germany’s colonial atrocities should also enter public memory. The public commemoration of the victims of the many crimes committed under German colonialism, such as those in Namibia, is long overdue.

If there is one lesson to be learned from these actions, it is that bilateral agreements between governments cannot replace reconciliation between the peoples of the two countries concerned. It is possible to trace the descendants of the victims of the genocide in Namibia, but what about the perpetrators of this genocide? As the declared Namibian activist and author Jephta U. Nguherimo, President Steinmeier should apologize to the Bundestag for the German people to understand and learn about this untold genocide.

But so far this indispensable perspective has been totally lacking.

A compromise, but not yet a solution

The Germano-Namibian agreement is the limited result of a compromise reached after flawed government negotiations. It is nevertheless a widely recognized pioneering step. From the German point of view, this recognition of guilt and the consequences that flow from it is a step towards the end of thecolonial amnesia. Ultimately, this could promote awareness of Germany’s colonial past, which is long overdue. It can promote an unqualified recognition that the Germans have occupied foreign lands and subjugated populations, thus creating lasting damage. But even that will do little to heal the lingering wounds in Namibia.

Decolonization and reconciliation must become a process shared among peoples. Governments can help facilitate such a process. They will never be able to supplant him.

* Reinhart Kössler is professor of political science at the University of Freiburg.

** Henning Melber is Professor Emeritus in the Department of Political Science, at the UUniversity of Pretoria.