Berlin The corona pandemic accelerates digitization, but also shows deficits in the use of new technologies. Small and medium-sized companies in particular are lagging behind in terms of development: large companies are “much more digitalized than medium-sized companies,” according to the 2020 digitalization index, which Federal Minister of Economics Peter Altmaier wants to present to the government this Monday at the digital summit. Small companies with fewer than 50 employees have the greatest need to catch up.

The data was collected for the first time this year, so a chronological comparison is not possible. But a look at sectors and regions: The most advanced digitization is – unsurprisingly – the information and communication sector. The automotive industry comes in second best, followed by electrical engineering and mechanical engineering.

Under the leadership of the Institut der Deutschen Wirtschaft (IW), the authors see some catching up to do in areas such as trade, transport and logistics, and tourism. For the study, the scientists rated the extent to which the processes, products or business models in the sectors are already based on digital technologies. The corresponding qualifications of the employees are also incorporated.

The picture is not uniform: Car manufacturers and their suppliers stand out due to their high level of research and innovation activities, but their products and business models are only based on digital technologies on average. It looks similar in mechanical engineering.
The Ministry of Economic Affairs commissioned the study in order to obtain a more detailed picture of the status of digitization and the existing deficits using 37 indicators. The detailed report will appear in early 2021, and the individual results should also be available in an interactive online tool. The index is now to be compiled annually and provides policy guidance.

The industrial policy spokesman for the Greens in the Bundestag, Dieter Janecek, called on Altmaier to “do more to better support small and medium-sized companies in digitization”. Worrying are especially the bad values ​​for the trade in times when the US online giant Amazon constantly expanding its market share.

The poor performance of many rural regions shows again that the “completely inadequate digital infrastructure” is proving to be an obstacle to the digital economy, criticized Janecek. 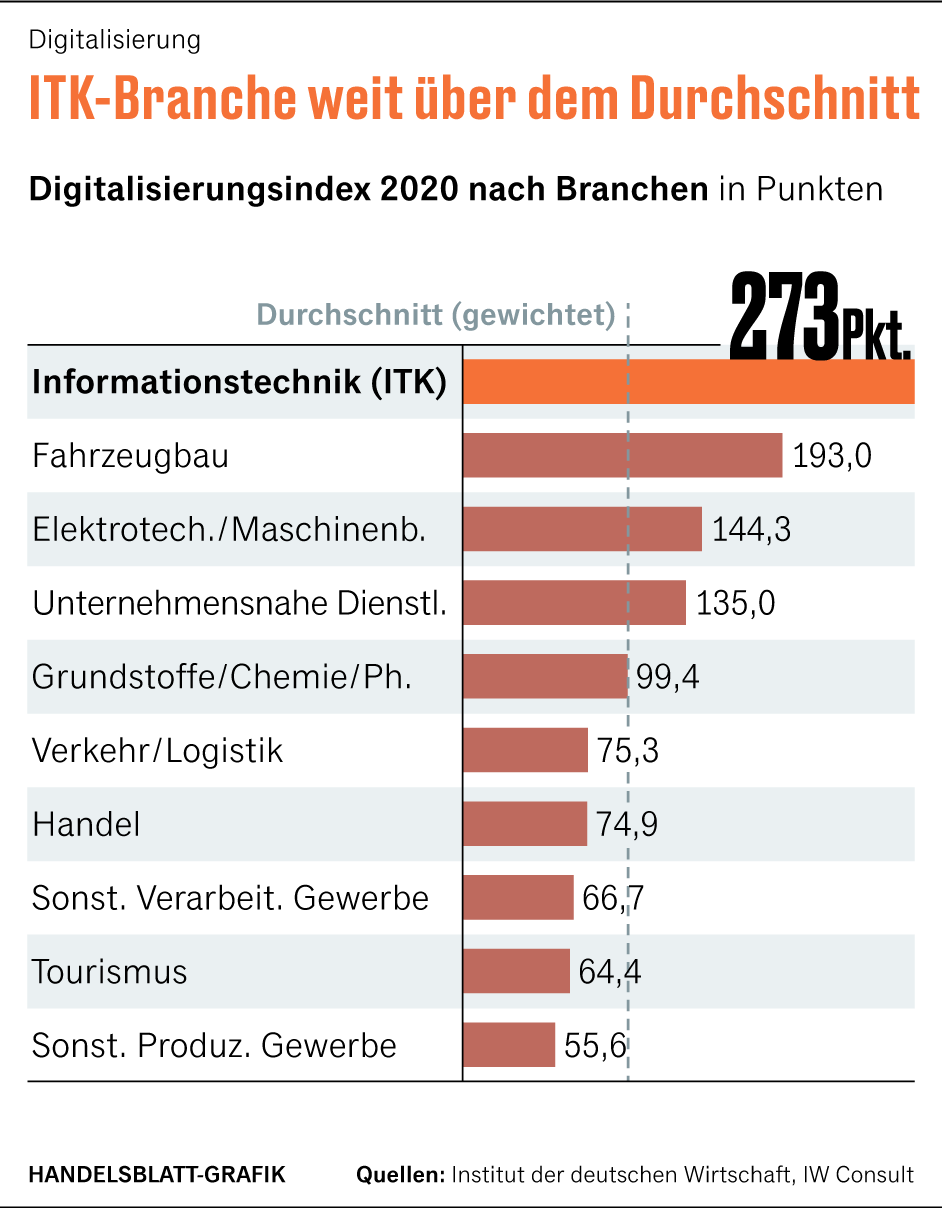 Reinhold von Eben-Worlée, President of the “Die Familienunternehmer” association, also called for more support from the federal government: “Now it is up to politicians to ensure good framework conditions and unleash a digital economic miracle,” he told Handelsblatt.

Legal certainty for companies when dealing with industrial data must be improved, and the “rules of fair competition” must also be enforced in the digital sector. A consistent digitalization of the administration is also necessary: ​​During the pandemic, authorities were temporarily unable to work, for the economy this means an “expensive standstill”, said von Eben-Worlée.

At the digital summit on Monday and Tuesday, the federal government will discuss its digital policy with business representatives and experts. The event is taking place online due to the pandemic. The focus this year is on linking the two megatopics of digitization and sustainability.

Chancellor Angela Merkel will speak on Tuesday, as will EU Commission President Ursula von der Leyen. Altmaier discusses with the bosses of BMW and SAP, Oliver Zipse and Christian Klein, about the European cloud infrastructure Gaia-X.

More: According to an OECD study, Germany is only in the middle in many areas of digitization.