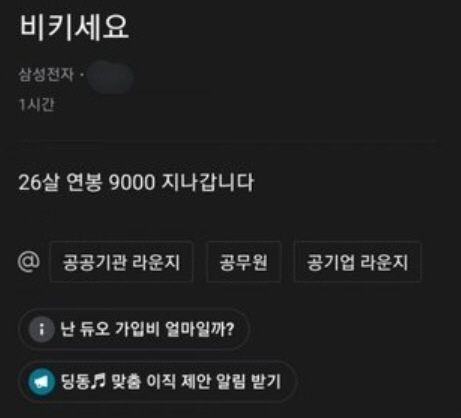 Netizens, who are estimated to be in their 20s working for Samsung Electronics, have been arguing about public officials while disclosing their salary to an online community.

On the 30th, a number of online communities posted articles on ‘Blind’, an anonymous community of employees recently.

Since Blind confirms identity through email authentication of the company to which it belongs when registering as a member, the author is presumed to be an employee of Samsung Electronics. Accordingly, it was interpreted that a 26-year-old writer with an annual salary of 90 million won at Samsung Electronics boasted of his salary and age.

In the comments on the post, an employee of a securities company said, “It’s really cute. He thinks he’s the best with an annual salary of 90 million won”, “My company receives 200 million won each at that age”, etc., making it a topic of discussion.

In the online community, reactions such as “It summons unrelated public officials and public institutions and gives a feeling of ignoring them” and “It is foolish because it cannot be compared with those who passed the administrative examination” were the main responses.

Others said, “It’s great if your annual salary is close to 100 million won in your mid-20s”, “Even if the title or tag keywords are offensive, it’s not that I said bad things directly, but it’s too much.”