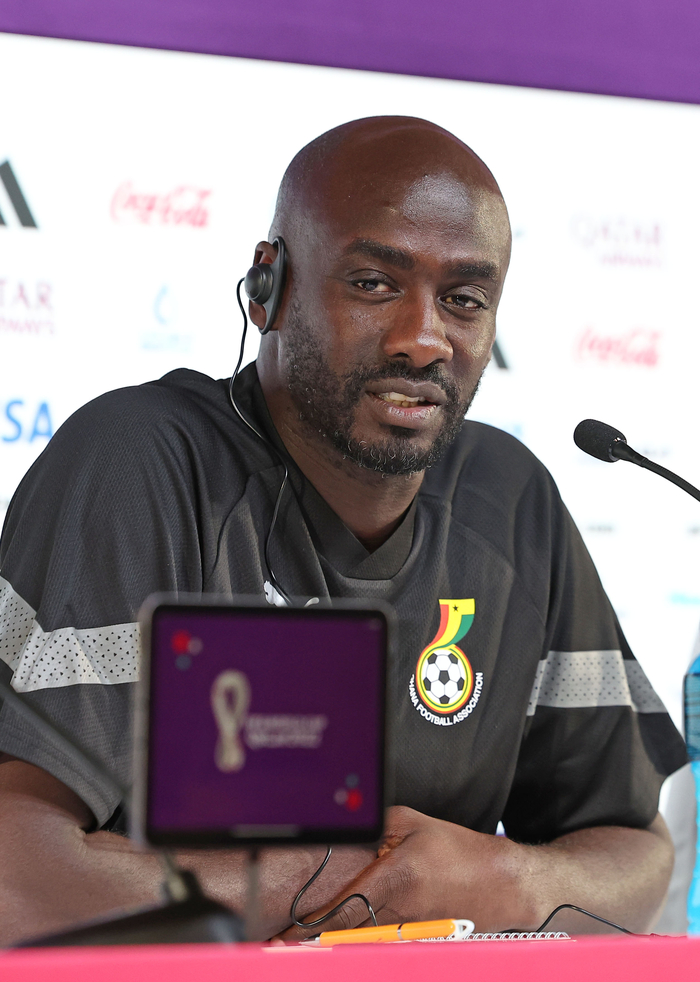 Ghana’s only interest in preparing for the Korean War was Son Heung-min (30, Tottenham). Both the coach and the players pledged to do their best to block Son Heung-min while marking Son Heung-min as the number 1 target to watch out for.

At an official press conference held at the National Convention Center in Al Rayyan, Qatar on the 27th (local time), Ghana national football team coach Otto Ado said, “Korea is a strong opponent. We are preparing well,” he said. “Korea should keep an eye on Son Heung-min. I know Hwang Hee-chan (Wolverhampton) is injured, but he should be wary of all Korean players.” Ghana will play the second round of Group H of the 2022 FIFA World Cup Qatar World Cup group stage against Korea at the Education City Stadium in Al Rayyan, Qatar at 4:00 pm on the 28th (10:00 pm on the 28th, Korean time).

For Korean fans, Ado is well known for his relationship with Son Heung-min. When Son Heung-min was playing for the Hamburg (Germany) youth team, the person who coached him was Coach Addo. Coach Addo said, “I had a good impression when I coached Son Heung-min in Hamburg. He was a player with a good character,” he said. “I worked very hard, so I was able to grow a lot. At the time, he saw Son Heung-min’s bright future and suggested that he should be used as the main player,” he recalled at the time. “I hope Son Heung-min can compete. Of course, we will also stand up as a team and block Son Heung-min.”

Son Heung-min, who is wearing a face mask due to an orbital fracture injury, is likely to play in the game against Ghana as well. Director Addo said, “Son Heung-min is building a very good career. I hope that Son Heung-min will continue to perform well, but I hope he will be an exception as much as tomorrow,” he smiled.

Ghana lost the first leg to Portugal 2-3. After the game, the Ghanaian media did not hesitate to criticize him for being too defensive. At the press conference that day, questions related to this were raised. Regarding this, director Ado said, “The media always calls a director’s choice a genius if it works, and criticizes it if he loses.” “The media is also not aware of our internal situation. I think we played on an equal footing with Portugal,” he refuted the opinion that he was defensive. However, he responded cautiously, saying, “I can’t say yet” about whether he will come out aggressively or defensively against Korea.

Ghanaian defender Daniel Amati (Leicester City), who attended the press conference with coach Addo, was also alert to Son Heung-min. Amati, who has experienced confronting Son Heung-min several times in the English Premier League (EPL), said, “Son Heung-min is a very good and sharp player. I will follow the director’s instructions well and block Son Heung-min well.” “(Not only Son Heung-min) I am closely watching all Korean strikers. He seems to be doing everything well,” and did not let down his vigilance.

Seiya Suzuki, whether or not to participate in the WBC “by the end of the year” Complex feelings “I’m quite worried” | Full-Count