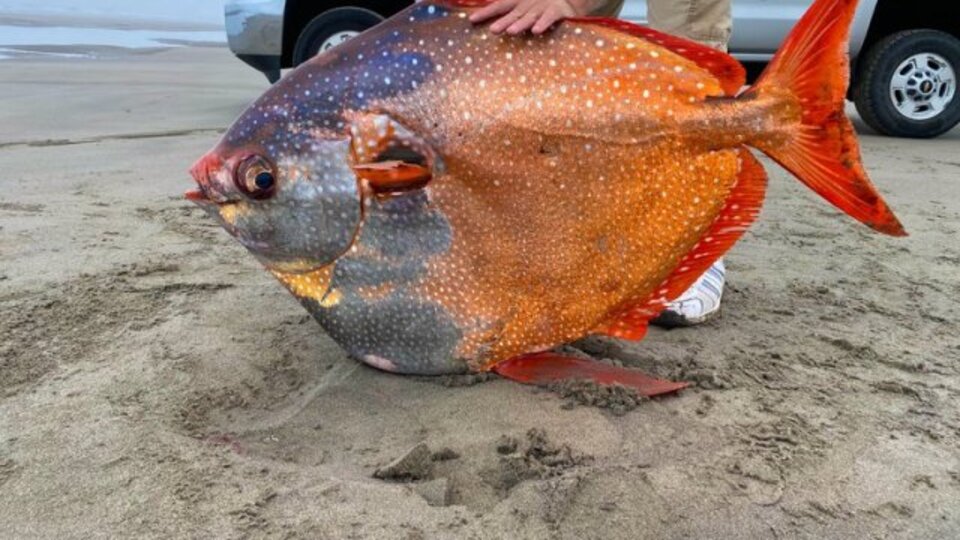 At first, it was some guys who discovered it. With their screams, they alerted those who walked the beach. Within a few minutes, a huge group had formed that looked surprised. After a while, experts from the Oregon Seaside Aquarium arrived.

They were also stunned by the huge and round specimen of sunfish or opah that was dead on the sea coast. Bright orange, silver and with white spots, weighed 45 kilos. His large eyes had flecks of gold.

The scientists, almost a week after the discovery, They do not have an explanation for his death and his arrival on the maritime shore of this State on the North American coast.

Tiffany Boothe, deputy director of the aquarium of the small community beach of Seaside, shelled her doubts about the appearance in that region of a sunfish. Boothe explained that it was the first time there had been one of them in Oregon and that the cause of death was unclear, given that “He was in good condition, which means he was close to shore when he died.”

For its size and beauty, the discovery of the fish caused in social networks “a strong stir” posted the Seaside Aquarium on his Facebook account last Wednesday, when he was found.

Experts from the Seaside Aquarium in Oregon, in the United States, analyze the remains of the fish weighing more than 45 kilos. Heidi Dewar, a biologist at the National Oceanic and Atmospheric Fisheries Administration (NOAA) said that these cases are “unusual”.

The specialist awarded climate change as a possible hypothesis about the arrival of the sunfish in that area. “We see how some marine organisms move north when ocean temperatures rise”, He indicated.

However, he noted that “there are some sunfish or opah off the coast of California, near Oregon, so not super surprising. It’s not like it’s a fish that came from the Southern Hemisphere ”.

NOAA indicated that this fish is typical of seas of tropical and temperate waters, including the Pacific Islands and the West Coast, Southeast, New England, and Mid-Atlantic regions of the United States.

There is not much information about the sunfish, although it is known that he is the only one with warm blood, that it is a deep-sea predator and that it has blood vessels in its gills that allow warm blood to circulate throughout the body.

The sunfish or opah found in Oregon on Wednesday of last week will be frozen until the end of the year, when it is planned to be dissected to study your samples. “Their weaving could reveal where they live and what they eat,” Dewar said. While, its skeleton will be preserved so that it can be displayed in the aquarium.