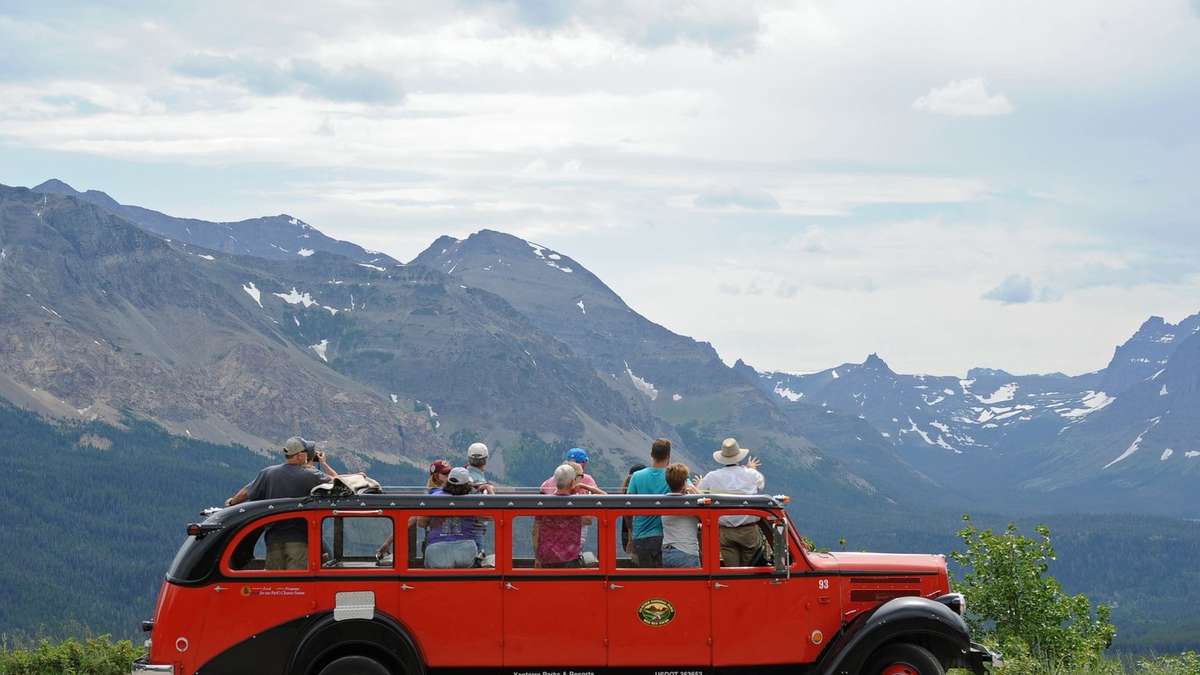 There are still remnants of the enormous glaciers from which Glacier National Park in the Rocky Mountains owes its name. But they are not the main attraction of the region. But mountains and lakes, bears and moose – and some rolling red oldtimers.

Edward Daniel is very experienced in driving big red cars, having been an Atlanta firefighter for 29 years. Georgia’s stifling southern summer sultriness has Ed against the fresh mountain air of Montana exchanged.

In the state far in the west of the United States, he no longer wears a fireproof uniform. And instead of a heavy fire truck, Ed steers an old red coach towards the next tight bend: a White 706, built in 1936.

A total of 33 red buses from the late 1930s are still in use today Glacier National Park On the way. They are the secret stars of a high mountain region, which is considered an important retreat for animals and plants, whose hardly touched nature is also touted as the “crown of the continent” and attracts more and more tourists.

The reserve borders Canada and connects to the Waterton Lakes National Park there. Together, the two parks have formed the Waterton-Glacier International Peace Park since 1932.

With 17 vacationers on the wooden benches of his White 706, Ed left in the morning, the rote Bus is booked out. The Jammers, as the drivers of the oldtimers are called, experience this almost every day when they advance with the roof down to a height of over 2000 meters during the short summer season, past steep peaks and shimmering mountain lakes. “Before the Second World War, the buses were specially built for use in national parks in the western United States,” says Ed. “Today they are only in operation here in Glacier and Yellowstone.” The equipment consists mainly of original parts.

Those who opt for a tour in the red bus can get on at several locations in the southwest and east of the park. Half-day trips are available, but there are also around nine-hour drives on both sides of the main ridge of the Rockies. The daily program called “Crown of the Continent” costs around 100 US dollars for adults. The journey leads on the Going-to-the-Sun-Road, a winding route inaugurated in 1933, over the 2025-meter-high Logan Pass. But this is only possible without snow. As a rule, the route is opened between mid-June and the beginning of July, for example on June 23rd in 2018.

On this day, however, Ed Daniel does not go over the Logan Pass, but over the Marias Pass to the south of it – at 1591 meters above sea level, the deepest place in the USA where the main Rocky Mountains ridge can be crossed.

It quickly becomes apparent that the “Continental Divide” separates two very different regions. Because the weather here mostly comes from the west and rains down on the mountains, some of which are more than 3000 meters high. That is why trees grow there that are usually found in the Pacific, such as western hemlock and giant thuja. East of the passes, the land is much drier, the trees are lower, and the Great Plains will soon begin.

The Going-to-the-Sun-Road and the road over the Marias Pass provide east-west connections in the region. But they also contribute to the fact that tourism is concentrated in a few places. “There are a total of almost 750 miles of paths and trails that the National Park Service takes care of. However, only about 37,000 visitors per year are out and about with a backcountry permit and hike, for example, with tents far away from all roads, ”says Melissa Scott from the local company Glacier Guides. “About 85 to 90 percent of all park visitors leave their cars or buses no more than 100 meters away,” says Scott.

One reason for this is the bears. There are around 250 to 300 grizzlies and around twice as many black bears in the park. In late July and August, when the berries ripen in Glacier, it often happens that they stand on hiking trails. “The bears aren’t necessarily aggressive there, but they don’t leave when people come, either,” says Scott. For this reason, hiking trails are often closed at this time of the year.

On this day, Melissa Scott is on her way to Redrock Falls, a popular destination for a half-day tour in the east of the national park. The path is lined with tall bear grass, a plant with white inflorescences that only blooms every five to seven years. If, as in 2017, several vegetation cycles overlap, one speaks of the “superbloom” – entire slopes are then full of bear grass. Will there be bears today too? There is no guarantee. It is important to have at least four people out and about and to draw attention to yourself regularly by shouting loudly.

The hiking trail to Redrock Falls is in the Many Glacier Park area. This name is a bit misleading, because so many glaciers cannot be seen here. After the end of the last ice age, the glaciers retreated further and further. Today there are 25 left.

It is late afternoon and Ed Daniel is driving the red bus back to West Glacier. The peaks glow in the sun. Some tourists still have a long way to go on this day. Passing Flathead Lake, the largest natural lake in the western United States, they continue 220 kilometers south to the university town of Missoula. Others leave the day with you Boat trip end on Lake McDonald in the west of the park.

The old wooden boat “DeSmet” leaves at 7:00 pm at the “Lake McDonald Lodge”. Captain Alec Shobe comes from Virginia, still a southerner who ended up in Montana – but in his case not because of the good air. The National Park Service has a right of first refusal for the houses on the shore, says Shobe, but they can also be inherited within families. “I would like to marry into one of these families. It’s not going so well so far, but the summer is still long. Wish me good luck!”

Getting there: Glacier Park Airport near Kalispell is 42 kilometers from the visitor center in Apgar to the west of the park. Travelers from Europe can reach it by changing trains in Denver or Chicago (United Airlines), Salt Lake City or Minneapolis (Delta Air Lines). The journey with a rental car from Calgary in Canada is significantly shorter (370 kilometers) than, for example, a drive from Seattle (900 kilometers) or Salt Lake City (1050 kilometers).

Entry: German vacationers do not need a visa, but must obtain an electronic entry permit (Esta). It costs $ 14 and is valid for two years.

Climate and travel time: West Glacier reaches daily highs of 22 to 27 degrees in summer. The months of July and August often offer stable and sunny weather, but at night the values ​​usually drop below 10 degrees.