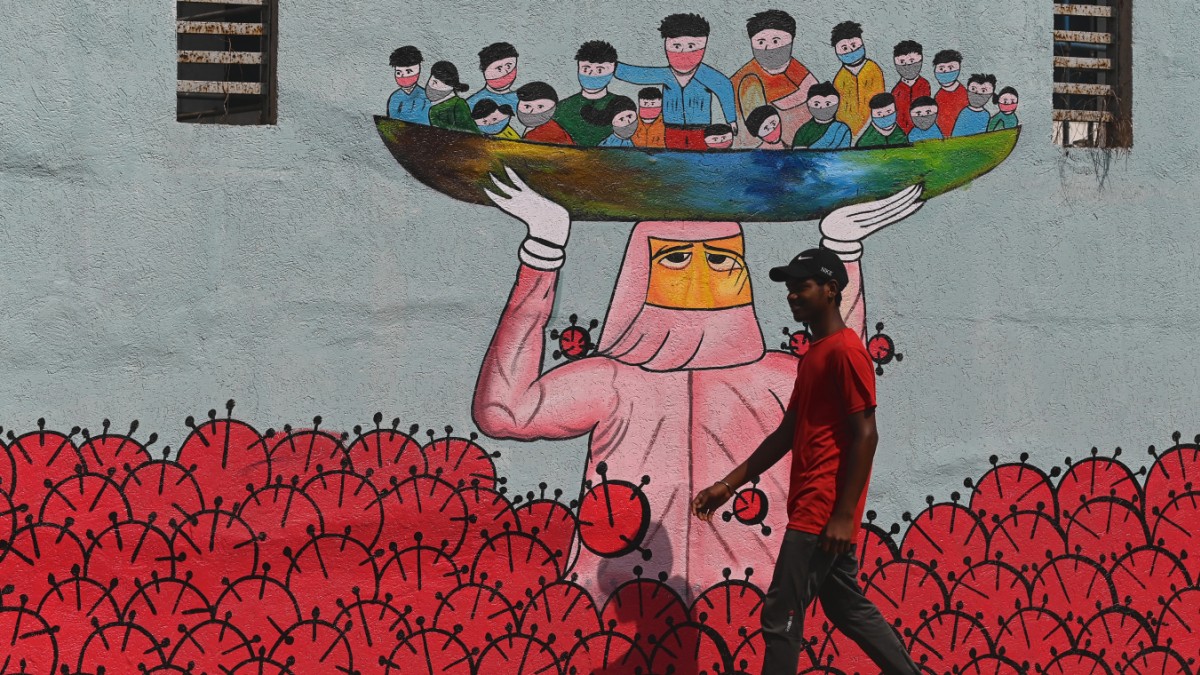 The weakest are always caught first. The corona pandemic hits those hardest who can resist the least and can hardly protest: children. This is what the non-governmental organization Oxfam points out in a new report – and that the epidemic is exacerbating inequality in the world: In the Corona year 2020, children in the poorest countries in the world had to do without four months of school, while in affluent countries it was only four weeks, on average. An estimated 33 million children, teenagers and students have suffered because of the pandemic completely broken off their education, especially in poorer countries – precisely where education is so urgently needed in the fight against poverty.

Until the outbreak of Covid-19, the world was well on its way in this battle. Even if it was too slow for many, the direction was right: since 1999 the number of people in extreme poverty has decreased by around a billion worldwide. Extremely poor are people who spend less than $ 1.90 a day. Year after year, their number fell, but because of the epidemic and its consequences, it is now increasing again. This is an unprecedented departure from the previous trend and the first increase since the Asian currency crisis in 1998.

Actually had the World Bank expectsthat in 2020 the number of the extremely poor will decrease by 31 million. Instead, an estimated 88 million additional people have slipped below the $ 1.90 mark. Their total number is now as high as in 2015, in other words: The pandemic is throwing the world back five years in the fight against global poverty.

According to the World Bank, the new poverty hits South Asia the hardest – and thus also India, by far the most populous country in the region. The United Nations counted India, along with the Congo and Niger, among the countries with the highest number of poor even before the outbreak of the epidemic, which is always measured by its huge population. Nevertheless, 28 percent of Indians were considered poor even before the pandemic, that is 364 million.

Families around the world currently share many problems. Daycare centers and schools are closed. Home schooling overwhelms parents and is usually not possible for poor people without technical equipment. This also applies to the economically weak in affluent countries. In Latin America and the Caribbean, according to the statistics compiled by Oxfam, the gap is so wide that only about 30 percent of children from low-income households have access to electronic teaching aids at all, compared with 95 percent in affluent households.

School meals are an important part of basic provision in many regions of the world. It’s all about survival. As early as 2018, the UN children’s aid organization Unicef ​​reported that around 880,000 children under the age of five died in India this year. The highest rate in the world. This was mainly due to the diet.

While misery increases in everyday life for many people, share prices are increasing.

Mukesh Ambani is India’s richest man, he is the owner of Reliance Industries, one of those gigantic Indian conglomerates. Reliance produces fuel, but is also in the telecommunications, sales and shipping businesses. So Ambani is an Indian Jeff Bezos, and as such, he more than doubled his wealth between March and October 2020, to about $ 78 billion. This is what the business magazine’s asset appraisers report Forbes.

Ambani isn’t the only one whose fortune soared between March and October. The financial markets had a turbulent year, followed by a dramatic crash in the first quarter and a fairytale recovery in the global financial markets. The influential MSCI World share index rose 14 percent in 2020. Only the owners of shares benefit from this fairy tale. The poor, on the other hand, often lost their livelihood.

For example, in the Indian software metropolis Bangalore, many small businesses quickly went bankrupt when the programmers moved to the home office and only ordered delivery services. These homeworkers were sometimes so far away, for example when they fled to their families, that the housing market collapsed.

India’s economy boomed for many years. The middle class grew and seemed to be able to continue to grow, as long as one serves the gigantic domestic market of 1.3 billion Indians and, on the other hand, invests in exportable products. The middle class in India includes the many millions of small business owners, which includes many people, from street kitchens to cobblers to corner cleaners, who were deprived of their livelihoods due to the hard lockdown last spring.

They often fall inexorably, are not caught by any social network, and lose creditworthiness. The non-governmental organization Oxfam reports on the poverty trap when poor small business owners have to sell their cattle or motorcycle to pay a rent and are finally broke the next month with nothing left to counteract. According to Oxfam, wealthy people therefore recover much more easily and quickly than people from the poorer classes. This heightened injustice will particularly affect women, children, youth, indigenous peoples and migrant workers. In any case, jobs in India that are mainly carried out by women are 1.8 times more at risk than men’s jobs in the current crisis. Indian economic output fell by 23.9 percent in the third quarter of 2020, and by another 7.5 percent in the fourth quarter.

In addition to food that is missing and education that is missed, child trafficking is increasing in many Southeast Asian countries. Marriage of minors is also increasing again. Oxfam and the UN fear around 13 million new child marriages worldwide by the year 2030 due to the pandemic. Again, India is particularly affected.

Parents give away their children, marry them off, sell them in slave labor or prostitution because they cannot feed them themselves, let alone train them. Often the children are lured away or simply kidnapped under the promise of a small amount of prosperity. In India, work is permitted from the age of 14 if the young people work in a company close to the family and not in dangerous conditions. This makes monitoring difficult.

Between April and September last year, the organization “Bachpan Bachao Andolan” (Save the Children) found 1,127 children and handed them over to their families or children’s homes. 86 human traffickers were arrested. But the number of unreported cases in this area is high, especially in a country where nobody checks exactly how many children there are poor families in the country. And whether they voluntarily move to the big city to bleach jeans or paint lacquer bracelets. During the pandemic, “Bachpan Bachao Andolan” asked 245 households in five more rural provinces in India whether they were willing to send children under the age of 18 to work in urban areas – due to the economic crisis. Around a fifth of the households that answered said yes.

Many of these children send home most of the few rupees they earn. They spend the night in communal bunks themselves, and are often severely punished if they fail to meet their requirements. Running away is not that easy, just because of the distances. Children are exposed to an even more brutal market than that of globalized supply chains.