The “Charro de Huentitán” confessed that in 2012 he suspended his “Goodbye Tour” because he was detected liver cancer when he was in Houston. (Photo: Instagram)

These have been especially difficult times for Vicente Fernández, because in addition to suffering from the situation of the pandemic that keeps the world in suspense due to the financial and social uncertainty it represents, The ranchera singer has positioned himself in the middle of the controversy over various accusations against him.

The call charro from Huentitán has been pointed out on social networks by a couple of fans, who denounced that the famous vernacular singer made undue touching when they approached him in a plan of fans to be portrayed by his side. These videos went viral and unleashed a wave of criticism against the interpreter who will turn 81 this Wednesday, February 17.

And although the veteran singer offered a clarification of what happened in an interview he gave to his former daughter-in-law, the journalist Mara Patricia Castañeda, to whom he assured that It had not been his intention to go overboard with the girls, but it was all due to a misunderstanding and that he would be unable to commit an act against the integrity of his fans, the truth is that a large part of the public was not very satisfied with the statements of Don Vicente.

Lupita Castro assured that when she was 17 years old, she was sexually assaulted by the rancher singer (Photo: File)

In addition to this scandal, the accusation of the singer Lupita Castro also arose, who declared to the media that She was the victim of rape by the patriarch of the Fernández dynasty four decades ago, when she was 17 years old and working with him.

After this information was made known and after Vicente Fernández Junior declared that Lupita should file a legal complaint against the singer instead of declaring in the media, the injured party said that the lawsuit is not something that is in her plans, because for her it would be a very exhausting situation.

“Imagine doing a process, how many years would it take? The money and the wear and tear not just for us, for our families. That is my decision, it is very mine. Imagine 40 years to think this, believe me that I am doing what I have to do, “Lupita said in an interview for Come the joy.

Against this background, now an old interview has been taken up that shows that Vicente Fernández also experienced sexual harassment firsthand by a woman for whom he worked in his youth.

It was in 2012 when Vicente confessed to the program Salt and pepper of the chain Univision that the boss he had in 1963, María de Jesús Chavarín, approached him invasively, an invitation that the singer had to reject. The anecdote dates from when the charro began to sing in the restaurant The dawn of Guadalajara, from Mexico City, a time when he was already engaged to be married to Cuquita Abarca.

“It was a lady named Chuy. Once, finishing singing, he said to me: ‘Go take a bath, I’ll wait for you here. We’re going to have a good time’. I said, ‘How do you think I’m going to take her seriously! You are the landlady, and I am just a cat “, said the singer, who assured that two years after rejecting the lady’s offer, he was fired from the place. 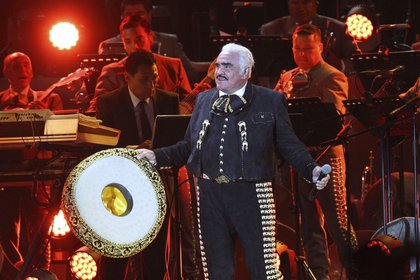 The singer explained that everything was due to a misunderstanding, and that it was not his intention to take advantage of the young women (Photo: Cuartoscuro)

Vicente said, according to the information taken by the magazine TVyNovelas, that years later, when the singer of This jealousy He was famous, that woman came to see him perform in multiple presentations in the interior of the Republic. But as a kind of revenge, Vicente asked his audience to applaud María de Jesús for having supported him at the beginning of his career.

“She went to see me several times, and I always asked for applause for her. She said that she had encouraged me to start my career, “said the singer, who finally stated that although he was grateful for the support he had from his then boss, he never forgot the harassment he allegedly experienced.

This passage was not the only harassment he experienced Chente, as it appears in the autobiographical book But I’m still the king, published in 2013, the singer received a bite in a buttock: “Once an admirer bit me a tepalcuana”, reads a page of the book published by Editorial Televisa.

“Let him file his complaint”: Vicente Fernández Jr. spoke about the accusation that Lupita Castro made against his father for alleged sexual abuse

Lupita Castro refuses to present a legal process against Vicente Fernández after accusing him of sexual abuse: “I don’t have the heart”

The Mexican Kim Kardashian spoke about the Vicente Fernández harassment scandal: “They will always look for the ugly to be fucking it”