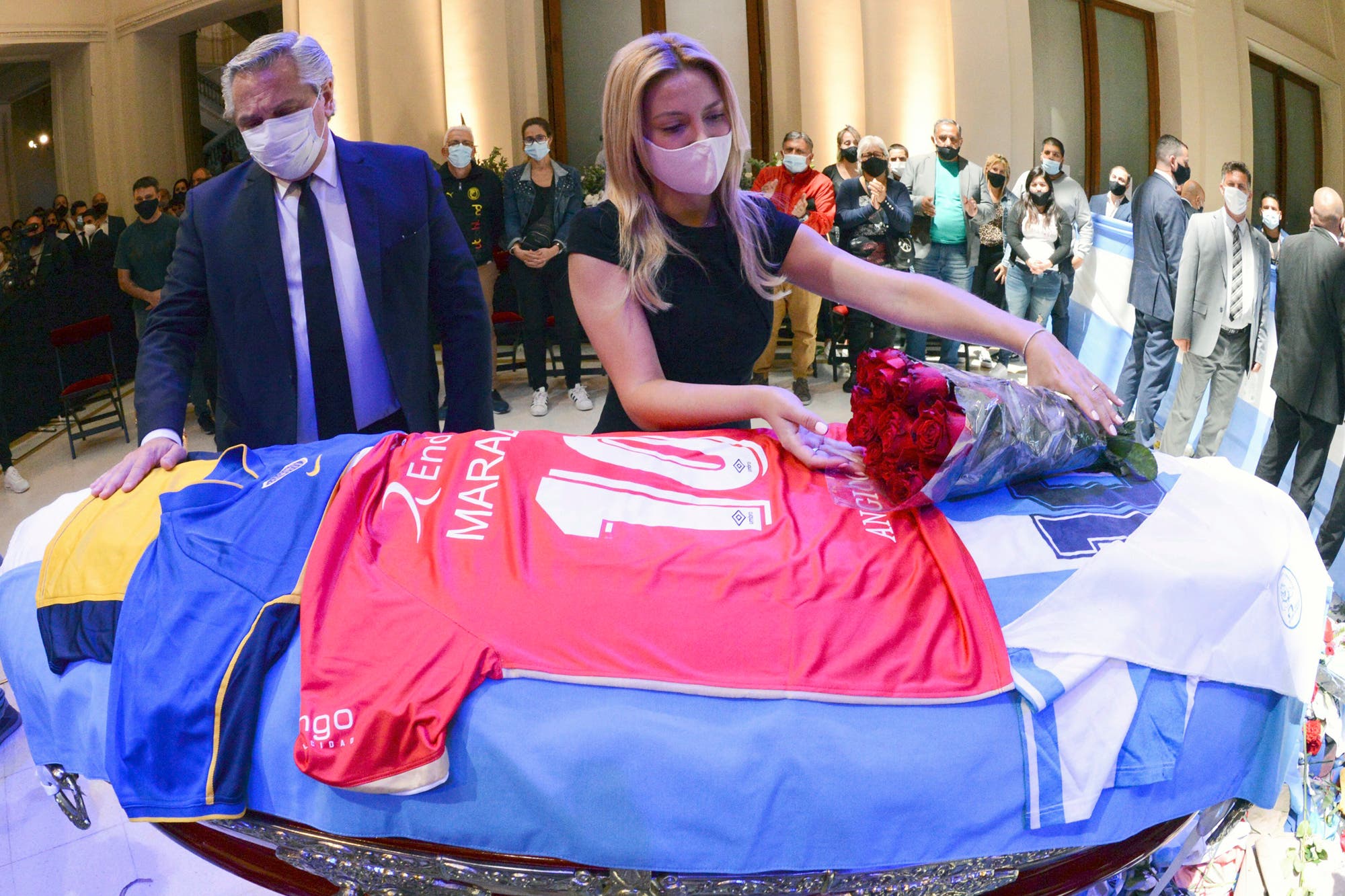 “It could have been worse”. “It could have been done better.” In those two sentences that Alberto Fernandez delivered before a few collaborators summarizes the first government conclusions about him overflowing funeral State of Diego Maradona. A compendium of resignation, self-indulgence and criticism (without self-criticism) for another Argentine embarrassment that goes around the world. But also more than that.

The two sentences synthesize the way in which Fernández faces and manages the vicissitudes of his administration. Faced with almost everything bad that happens, the President and his team tend to show an exhibition of alienation, of disregard, but also of victimization because the events do not happen as they have been proposed, imagined or desired.

In public statements the head of state was even more explicit. “I trusted the social conscience.” “We had the ‘problem’ that the family wanted everything to end at 16”. “I hoped that everyone, in respect to Diego’s memory, would understand that some of us were going to be able to see him and others were not.” “It caught my attention that many raised that, having established the Government House, we had to establish the conditions from which it should be veiled. It seemed to me that no, I never faced that dilemma.”

Everything seems to indicate that reality is suffering in the Casa Rosada. And, at best, consequences are administered. But only rarely is it driven. It is what many political, social, business leaders and ordinary citizens claim, what they regret, what they suffer and for what they demand. It is the root of the crisis of confidence that this government has faced repeatedly in its first year.

Maradona was once again the catalyst for the Argentine reality. The idyllic world and the idealized people imagined from the offices of the very porteñísimos leaders who govern the country is much more complex and has a much higher degree of decomposition than is assumed and admitted. As if the representation of the social subject was not linked to the crude and painful statistics that describe it in its multidimensionality and sharpness. That reality demands much more than just managing internal and external conflicts. Or to console himself that “it could have been worse.”

“All the time we seem to be content with just losing,” A ministerial advisor with a clear Albertist stamp admits sadly. “We do not look like a Peronist government. There is no management, leadership or audacity,” they accuse from the Christian sides. The take-off ramp that, as it was imagined, could have provided another popular wake at the Casa Rosada ended up being a major stumbling block, whose consequences are not yet measured. Nestor Kirchner was not Maradona. The Argentina of 2020 is not the one of 2010.

“Liberalism and progressivism are similar in that they both profess ‘letting do, letting go’ as a philosophy of life (.) If the State does not guarantee security because it fosters a philosophy of non-intervention, the law of the fittest is enshrined.” , shot without euphemisms, the Buenos Aires Secretary of Security, Sergio Berni, in a column published in Infobae, dedicated to criticizing what happened at Maradona’s wake. The Christian official came closer to acquitting Horacio Rodríguez Larreta than to defend Fernández. It is no longer just “friendly” fire on the Minister of Security, Sabina Frederic.

The illusion that things happen because they are desired or because the planets align is just a caricature not too far removed from the real image that the Government projects. The longing for time to fix the broken dishes, heal disagreements and settle contradictions has a constant presence. This is what happens with various actions of Cristina and Máximo Kirchner that affect government plans. The recent Christian parliamentary festival reached its climax on Friday with the approval in the Senate of the bill demanded by the vice president to facilitate the appointment of the head of all federal prosecutors at the pleasure and pleasure of the majority of the ruling party that she does drive with an iron hand and a titanium glove (never silk). The national duel that had been ordered by the Executive Power still ruled. It was a blow to the liver of the declaimed Alfonalbertista institutionalism.

The interruption of the dialogue between the President and the vice president, which is now over a month, is not surprising, nor the coldness exhibited at the funeral. The singular thing is that Fernández minimizes the situation and some of his collaborators affirm that he even feels comfortable. He prefers it over the lengthy and fruitless arguments that literally put him out of bed. Dialogue has never been one of Cristina Kirchner’s attributes. Yes impose their purposes, and usually achieve it in what depends on it. Therefore, she would not be uncomfortable either. In addition, he already said that the one who governs is the President and that there are “officials who do not work.” That does not depend on her. The “everything could be worse” also works in your case. 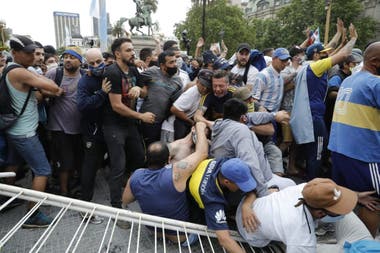 Everything seems to indicate that reality is suffering in the Casa Rosada. And, at best, consequences are administered. But only rarely is it driven. Source: LA NACION – Credit: Santiago Filipuzzi

To celebrate the first year of government, it is enough for Fernández to keep alive the illusion of the alignment of some planets: price of soybeans and other commodities on the rise, dollar smoothly, negotiation with the IMF under way, absence of social overflows in December and arrival of the vaccine against Covid-19. They are the five Albertist wishes to put an end to dose horribilis. But everything is very fragile. Rising prices, social unrest getting desperate, the dollar in unstable equilibrium and the agreement with the Fund, which now Minister Guzmán admits will not arrive before the end of the year, as he intended, do not merit relaxation. More if “we put in those that go outside”, as some officials complain about management errors and internal conflicts that end in goals against.

The extremely sour relationship with the opposition, driven by Christianity and by the let it go, let it go albertism, do not facilitate the realization of the expressions of wishes of the Government. Much more so when some support is expected or needed in Congress, such as what Guzmán claims to have to give consistency and credibility to an agreement with the IMF. The advances on Justice and the accusations and complaints of the Minister of the Interior, Pedro Wado; of Minister Frederic against the head and vice-head of the Buenos Aires government, Rodríguez Larreta and Diego Santilli, by the incidents during Maradona’s funeral they make the pax pandemic as scenes from another geological age.

The curious conference on Friday of the President to continue asking not to relax against Covid after the pandemonium of close contacts of the previous two days revealed both contradictions and profound changes. He was no longer surrounded by Larreta or Axel Kicillof, but by the Minister of Health and the head of PAMI, the camper Luana Volnovich, to start installing the hope of vaccination against the plague. The creation of expectations is the essence of politics. Facing an election year is a vital need for any government. That explains everything.

The President goes into swampy lands without baqueanos. This is the case of its involvement in the complex objective of getting the application of the legal prohibition for the re-election of Buenos Aires mayors to be postponed. Without the votes assured in the Legislature or the predisposition, until now, of the members of the Provincial Supreme Court to enable that bypass He runs the risk of being as exposed as in his failed and grotesque attempt to appease barrabravas with a megaphone to prevent the invasion of the Government House. Decisionism requires leadership and conviction. Maradona proved it. Without that, everything is voluntarism. This is confirmed by the two sentences that synthesize the fateful last week. “It could have been worse”. “It could have been done better.”