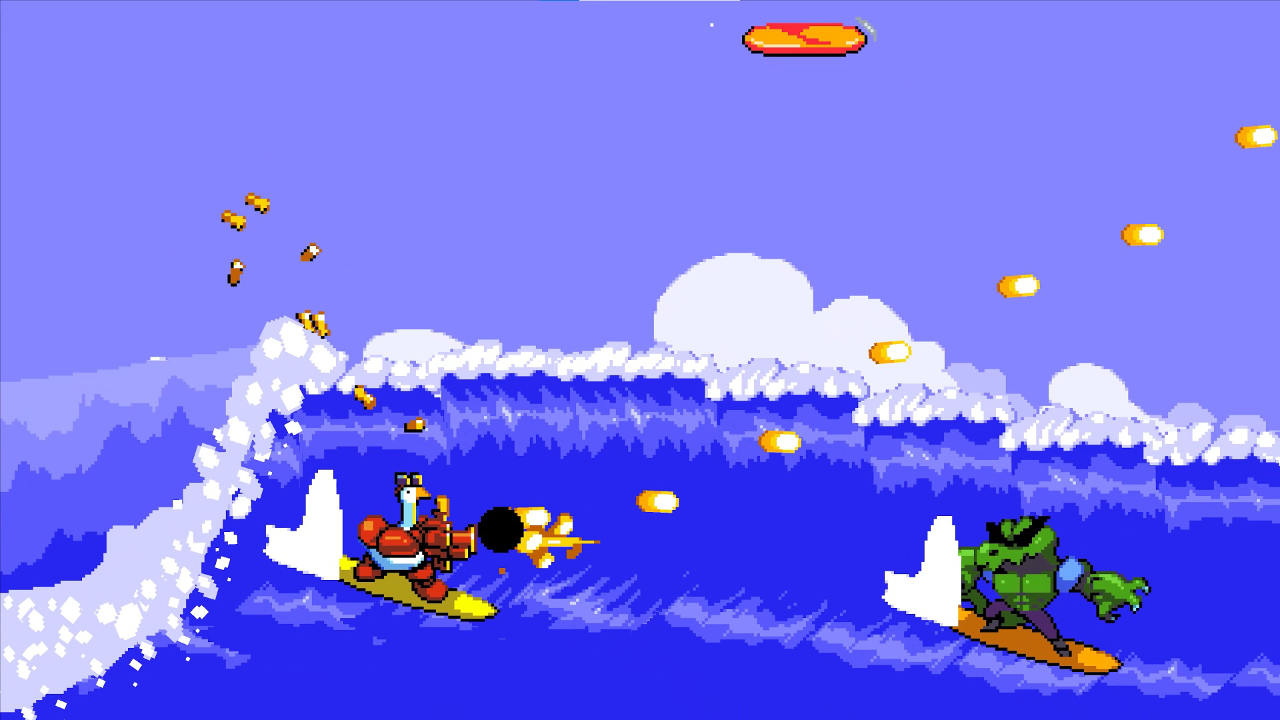 Our active gaming media indie game publishing brand PLAYISM announced on March 30th, “Mighty GooseAnnounced that the free DLC will be delivered on April 19th. It seems that an underwater stage will be added after clearing the main story.

“Mighty Goose” is a gun action shooter that becomes a legendary goose and rampages. In the world of this work, there was a Void King who was accompanied by countless minions and mechas, and reigned as the ruler of the universe. The main character, the goose, is the legendary bounty hunter Mighty Goose. In this work, the battle between the goose and the enemy corps is drawn.

Mighty Goose visits stages around the universe and fights soldiers and mechas under Void King. Inevitably there are many enemies on stage, but the number doesn’t matter because Mighty Goose is a legendary bounty hunter. Specifically, you can overwhelm the number with individual power, such as defeating the enemy before it attacks with a shotgun or rocket launcher, or avoiding the attack by rolling for a long invincible time. There is also a mail-order service for powerful weapons and tanks, and the violence of the quality of the legendary bounty hunter goose will destroy the enemy corps.

In addition to the basic arm cannon, firearms such as disposable shotguns, machine guns, and rocket launchers have appeared as weapons. Each stage has a long structure, but there are checkpoints that can be restarted from the middle of the stage. A high-tempo action that rampages with a firearm in one hand is developed.

The free DLC adds an underwater stage. The stage is the water planet Seto. The screenshots show geese shooting at enemies while surfing, and geese boarding a submarine. From the beach to the sea, new battles at water-related locations are likely to await. The free DLC will be available on April 19th at 16:00. Along with the announcement, the PlayStation 4 / PlayStation 5 version is on sale. The sale period is from March 30th to April 27th today. During the period, you can play this work for 990 yen, which is 50% off.

The work was done by Dutch studio Blastmode and Danish studio MP2 Games. According to the press release, this work is influenced by games such as “Metal Slug” and “Contra”. Compared to such works, the difficulty level of this work is suppressed, such as a large amount of recovery being installed, and it is also a feature that it is easier to play. Also, in the Steam version of this work, at the time of writing this article, 84% of the 419 user reviews were well received, and the status was “very popular”.

『Mighty GooseThe free DLC will be available on April 19th at 16:00. Also, the main story is being distributed for PS4 / PS5 / Xbox One / Xbox Series X | S / Nintendo Switch / PC (Steam, Microsoft Store) at the regular price of 1980 yen. The PlayStation Store has a 50% off sale until April 27th.

※ The English version of this article is available here

Most of the Gulf markets decline, and the Dubai Stock Exchange rises, with the support of the initial offering