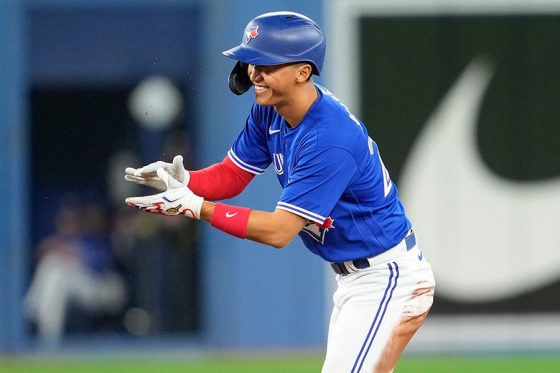 Kato marked a double and was blessed with a hug from a colleague.

Blue Jays Gosuke Katoh infielder will play in the starting lineup for the third time on the 27th (28th Japan time) against the Red Sox at his home base with “8th and 2nd base”. In his seventh major game, he marked his first hit in the fourth inning, a double. The team posted a video on the official Twitter account of Kato receiving blessings from his teammates one after another during the offensive and defensive changes. Fans are deeply moved by saying, “Tears of joy” and “8 years as a minor! Congratulations!”

The 27-year-old, who is in the 10th year of the US challenge, finally made his first major hit. Vladimir Guerrero Jr. Infielder and other teammates hugged Kato, who released a memorial one, and congratulated him one after another. The team tweeted, “Everyone is pleased with Gosuke Kato.” “He’s a super nice guy. He always has a nice atmosphere and always smiles. Everyone is happy,” he said.

Fans congratulated “Baseball is wonderful”, “That’s why I like this team!”, “Our team is perfect”, “Call this a family!”, “I love the atmosphere of this team”. Even in Japanese, comments were received saying, “It’s so funny that everyone is celebrating” and “The hugging men are too ugly.”

【Billiards World Championships】Break the record again!O’Sullivan is the first player in history to reach the top 4 for the 13th time

PM Modi | Modi to meet Macro, Scholes and Frederickson; To Europe in May