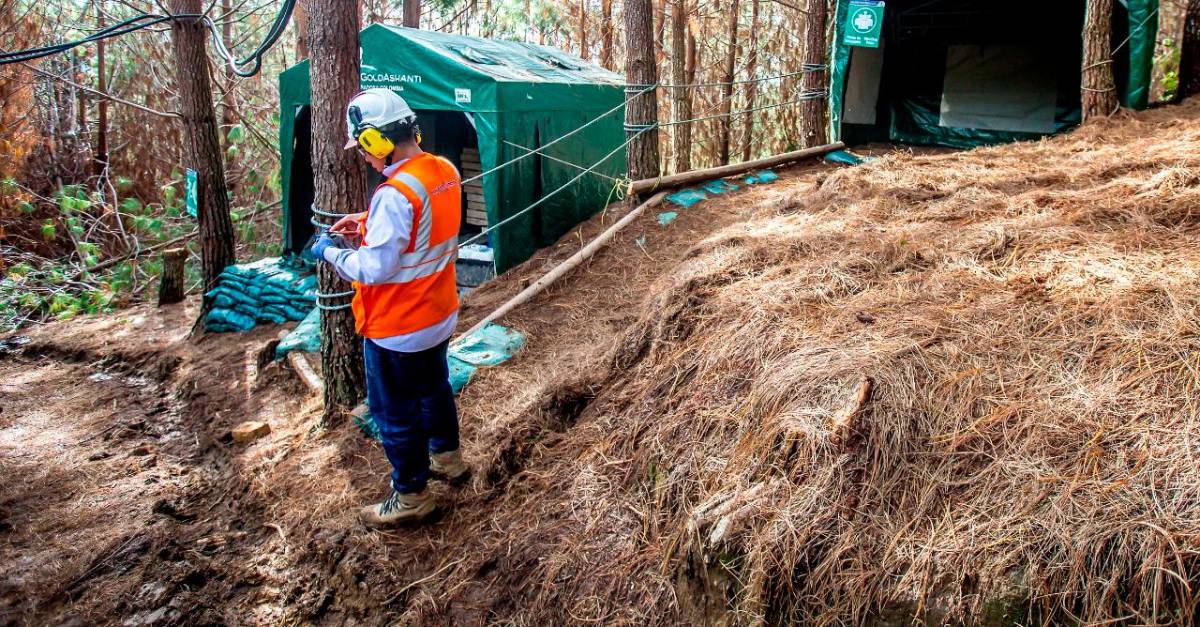 The Ministry of Mines of the Government of Antioquia approved the Works and Works Program (PTO) for the Quebradona mine, of the multinational AngloGold Ashanti, which would operate in the jurisdiction of the municipality of Támesis, in the southwest of the department.

This is an important milestone because it not only delimits the current area of ​​the additional exploration contract, but also approves the minerals to be extracted, such as copper, gold, silver, molybdenum and their concentrates. It also classifies it, based on the maximum annual mining production volume, as a “big mining” project.

So things, the project would only lack the mining exploitation license, which since 2019 has been studying the National Environmental Licensing Authority (Anla), who made 174 requirements to the environmental impact study made by the consulting firm Integral SA Fuentes de la Anla told this newspaper that the request is still in the evaluation process.

“Until you have the respective environmental license and duly contributed to the proceedings of the mining concession contract, there will be no place to authorize the start of additional exploration, construction, assembly and exploitation activities”, Says the resolution issued by the Secretariat of Mines of Antioquia and known by EL COLOMBIANO.

This endorsement of the Government comes after the February 5 the company will file a response to 545 requirements that the Ministry of Mines had done, since the work plan did not respond to neuralgic concerns such as the disposal of minerals and precautions to avoid the contamination of tributaries. 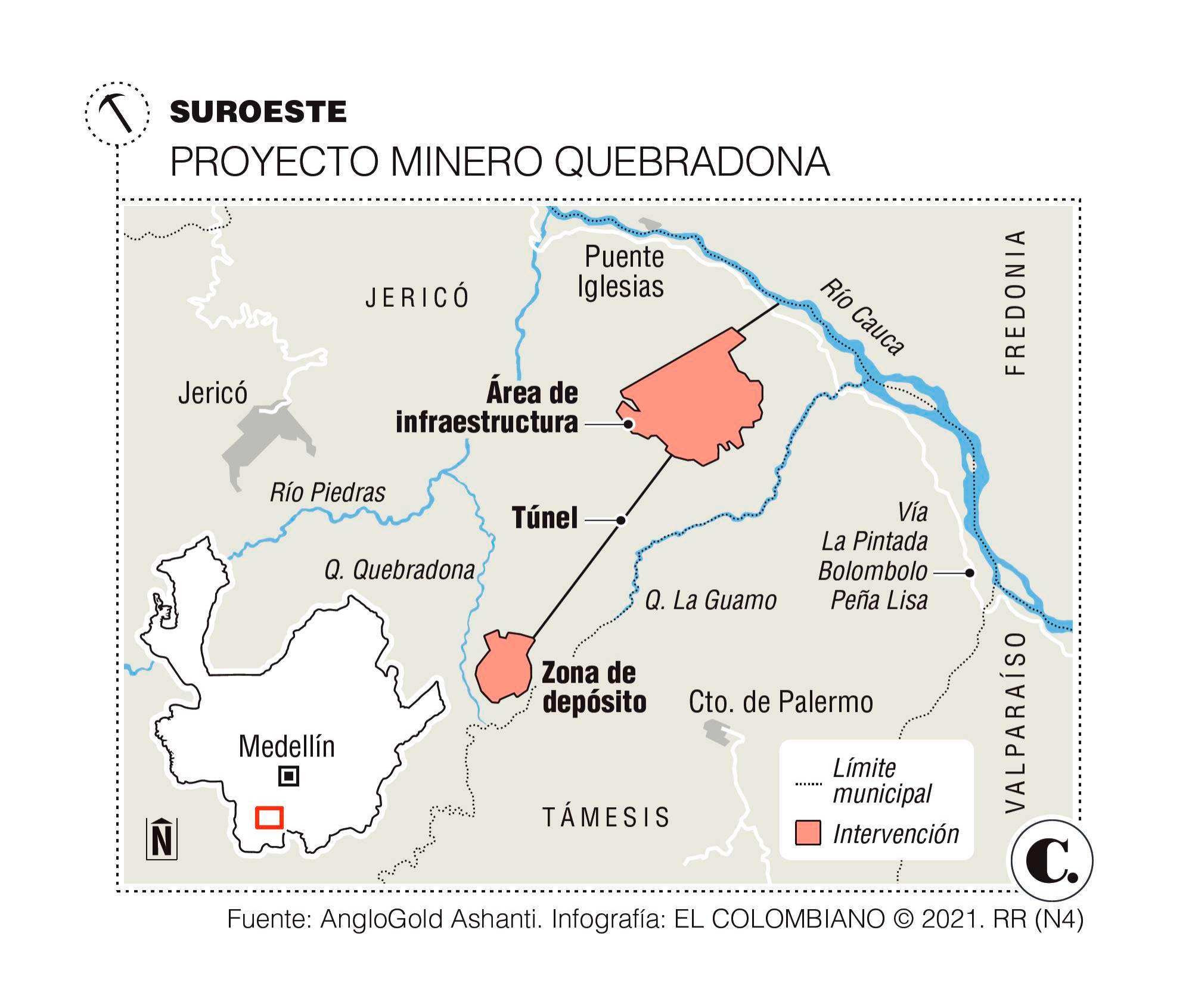 Waiting for an operating license

The recent resolution is an important step so that Quebradona can go into operation and it becomes a prior procedure for the final procedure before Anla.

On November 27, 2019, the mining multinational filed with the environmental authorities the Environmental Impact Study (EIA) of the project, with which it began the journey to obtain the exploitation license.

The South African company has mining titles and exploration permits that allowed it to confirm that the Quebradona mine, located on a mountain between the Cauca village and the Palocabildo district (11 kilometers from the urban area), 4.91 million tons of copper concentrate, 6.13 million ounces of gold, 85.1 million ounces of silver and 70.08 kilotons of moly can be extracted.

The multinational has in its favor the declaration of Project of National Interest in 2015. Currently, the company conducts exploration activities while obtaining permission to exploit minerals.

AngloGold Ashanti, of South African origin, is the third largest gold mining company in the world with a production of 3.8 million ounces in 2017. Since its arrival in Colombia in 2004, it has carried out geological exploration in various regions of the country.

Rejection in the Southwest

The project has marked a strong division in the municipality of Jericó among those who reject mining considering that this attack against the environment, the subsoil, water, tourism and the social component, while those who see it with good eyes indicate that it will be another source of income, employment and reactivation of the local economy, based especially on the coffee farming and tourism.

Among the voices of rejection of the mining project is that of William Gaviria, a peasant from the Palocabildo district, the area where the project would be carried out, who fears that mega-mining will affect the region.

Laura Santacoloma, researcher for Dejusticia’s Environmental Justice line, said that the projects that have such an impact on the territories They must have processes that guarantee that the voices of their inhabitants are heard to protect their natural and cultural values ​​and the fundamental right to water.

Sebastián Restrepo, leader of Southeastern Vision, indicated that the campaign seeks to make visible what is happening in his region, where the inhabitants and peasants have lived from the agricultural, cultural and tourist vocation and now comes a South African multinational that intends to impose a development model that they reject and that it is not aligned with the vision of “regenerative development”.

“Our Southwest has been the warm and generous home of our grandparents and we want it to be that of our grandchildren,” said Fernando Jaramillo, representative of the Southwest Alliance organization.

What the miner responds

Felipe Marquez Robledo, president of Anglogold at the time, explained that based on analysis and the advanced technology available to them, they can affirm “with certainty” that the EIA not only integrates the components required by the authorities to ensure compliance with technical specifications and social obligations and environmental aspects of the project, but reflects high standards of sustainable mining.

He added that behind the project there are 1,300 people with hydrological, biotic, abiotic, social and geological studies, and that mineral wealth with well-executed projects “can be a source of wealth for the regions and help reduce migrations to the capitals and metropolitan areas of the inhabitants of the towns.”