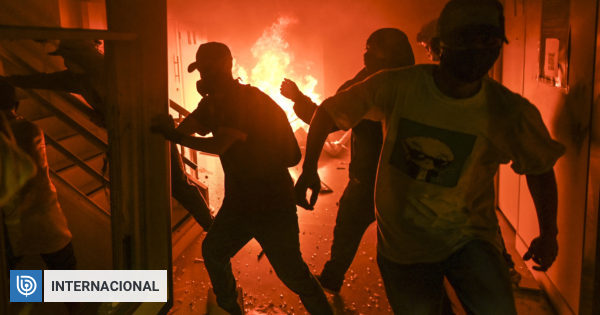 President Ivan Duque ordered this Friday the deployment of military troops in Cali in the face of the chaos and protests on the one-month mark of a bloody popular outbreak in Colombia that has claimed the lives of almost fifty people.

The third city of the country lived a tragic and chaotic day, where at least three people died in shootings involving protesters and armed civilians.

“As of tonight, the maximum deployment of military assistance to the national police begins in the city of Cali,” Duque announced after heading a security council in the city of 2.2 million inhabitants, where a touch of stays overnight.

“Unfortunately, three people have died (…) This situation has occurred between those who block and those who wanted to pass” through one of the points closed by protesters, said Jorge Iván Ospina, mayor of Cali.

One of the victims was Fredy Bermudez, a prosecution investigator that he fired at a concentration “causing the death of some civilians” and then died at the hands of the protesters, according to the head of the organization, Francisco Barbosa, who added that the official “was on rest.”

The W Radio station denounced the death of another person who was shot several times in the middle of a concentration.

The government has repeatedly demanded the lifting of the blockades that cause shortages and millions in economic losses. While the most visible sector of the protesters defends them as a valid form of protest and demands an apology for the excesses of the public force.

The prosecution has established that 17 of the 49 killed during the social outbreak are directly related to the demonstrationsBut the NGO Human Rights Watch claims to have “credible reports” of 63 deaths, 28 related to the crisis.

Meanwhile, the pandemic reaches record numbers of infections and hospitals are approaching collapse.

The protests advanced mainly on Bogotá, Medellín, Cali, Bucaramanga, Pereira, Popayán and Pasto, in rejection of official repression and the management of the economic emergency that unleashed the pandemic.

Although mostly peaceful, the demonstrations on Friday have led to clashes with the public force in the vicinity of the Colombian capital and other parts of the country.

On May 16, Duque opened dialogues with the most visible front of the demonstrations, but without reaching an agreement.

The crisis started when the government wanted to burden the middle class with more taxes, punished by the pandemic, to fill the fiscal gap left by the economic emergency.

Duque withdrew from the proposal, but the police repression heightened spirits. Today the streets are full of young people without jobs or education who ask for a more solidary state in the face of the ravages of covid-19.

“This month the force of the State has become visible, how it acts” against citizens, said Gustavo Peña, a 22-year-old university student who marched in Bogotá.

“And I am proud because my country is finally having dignity, and stands up not to ask for anything given away, but for opportunities, that there is not such an unequal distribution” of resources, he added to AFP.

The police forces, which in Colombia are controlled by the Defense Ministry, are under the burning iron of the criticism for excesses that link them to the deaths of protesters.

The international community has condemned the reaction of the security organs, while the streets cry out for a reform that will “demilitarize” a police force that has spent decades fighting guerrillas and drug traffickers.

The government assures that the demonstrations have been infiltrated by vandals and armed groups that survive the signing of the peace agreement with the extinct FARC, the guerrilla that became a political party after half a century of unsuccessful struggle for power.

Since coming to power in August 2018, Duque has faced unprecedented protests. The pandemic quenched the mobilizations for a while, but they resumed strongly despite the fact that Colombia faces an aggressive wave of covid-19 that has hospitals on the brink of collapse.

The demonstrations are peaceful by day, but escalate at night to violent clashes at various points that have led to the resignation of the Minister of Finance, the Chancellor and the High Commissioner for Peace.

Meanwhile, Duque’s disapproval reaches all-time highs (76%), one year before the elections from which his successor must emerge.

The pandemic has affected the economy of the country of 50 million people. In one year, the percentage of the poor population went from 35.7% to 42.5%, and almost a third of Colombians (27.7%) between the ages of 14 and 28 neither study nor work, according to the state statistics body.

“We have been resisting for a month in a fight against a State that is not even willing to listen. It reminds us that we must continue to mobilize, ”said Juanita Prieto, a 26-year-old student of Fine Arts.