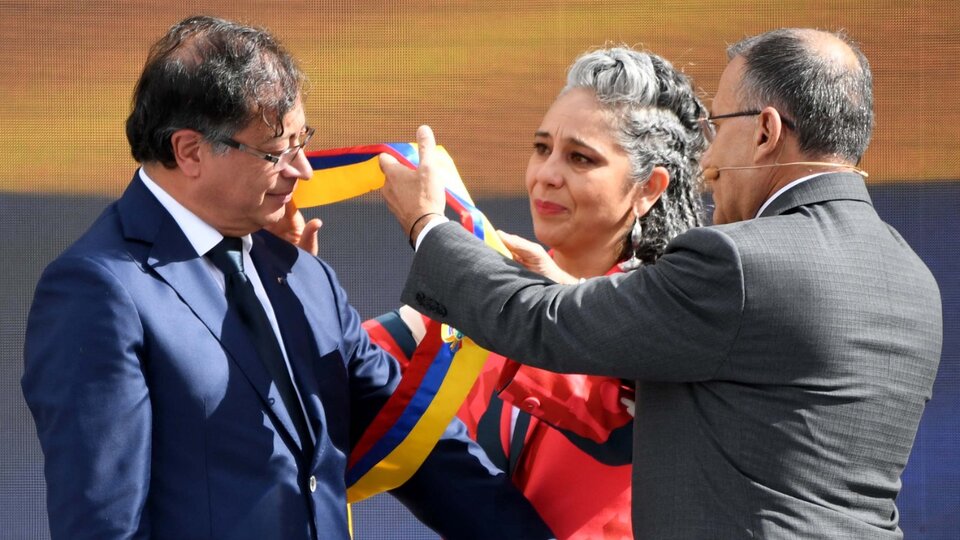 Gustavo Petro took the oath this Sunday as president of Colombia, before hundreds of thousands of people who accompany the investiture ceremony in Bogotá. It is a historic day, since the former senator became the first Colombian leftist president.

“I swear to God and I promise the people to faithfully comply with the Constitution and the laws of Colombia,” said Petro, 62, before the head of Congress in the central Plaza de Bolívar.

Senator María José Pizarro, daughter of Carlos Pizarro, a companion of the president in the M-19 guerrilla and assassinated by state terrorism in 1990, when he was a candidate for the Presidency, placed the presidential sash on Petro.

Minutes later, the new president swore in his running mate, Francia Márquez, who will hold the position of vice president. At that precise moment, Petro’s first presidential decision was carried out, loaded with symbolism: the new president ordered the Military House to bring him the sword of the libertarian Simón Bolívar, a relic that had been deposited in the Casa de Nariño, headquarters of the government, by express decision of Petro’s predecessor, Iván Duque, who refused to authorize his departure.

This Sunday, hours prior to the inauguration, Petro received President Alberto Fernández in the Private House of the Palace of San Carlos, where the liberator Simón Bolívar lived. Fernández gave him the permanent support of Argentina for the great challenge that the new president has to achieve total peace, with all the actors in the armed conflict.

Fernández valued Petro’s decision to resume dialogue with the National Liberation Army (ELN) and conveyed Argentina’s willingness to accompany the process towards an end to violence, after six decades of war. “We have carefully followed the proposals and guidelines to achieve total peace, both during the electoral campaign and after the victory. We are determined to continue and strengthen Argentina’s commitment and support for peace in Colombia”, said the President.

Fernández and Petro agreed that Latin America has to coordinate to strengthen organizations such as CELAC, as well as bring Colombia closer to Mercosur, in times of global economic turmoil. Both discussed the impacts of the war in Ukraine and the pandemic on the crisis in the region.

For decades, Colombia was governed by a right wing that maintained a foreign policy strongly aligned with the United States. For years, the northern country financed Plan Colombia to fight drug trafficking and insurgency. After the peace accords in Havana, Washington backed Bogotá under the name Paz Colombia.

It is in this new context that opens with the investiture of Petro that Fernández was hopeful. “We need an active Colombia on the path of Latin American integration.” And surely the reestablishment of relations between Colombia and Venezuela is part of the way, after years of estrangement between two countries that share 2,200 kilometers of border.

With songs in the ancestral languages ​​of the “elders” (leaders) and a large mandala full of elements of nature, last Saturday the vice president and the president elected by the alliance Historical Pact they were spiritually invested on the eve of the formal inauguration.

“I want to thank you for your presence in this ceremonial act. Here is going to begin a peace Government, of environmental justice, of social justice. The real power is here, in the popular movement,” Petro told the social movements.

Among the first measures to be debated in Congress are the ban on fracking, an emergency law against hunger and a tax reform. A new “more progressive and fair” tax scheme, Petro repeated during the campaign. Thus, the largest tax burden will fall on the 4 thousand largest fortunes in Colombia. It seeks to raise about 50 billion pesos annually (about 11,500 million dollars).

with the ambitious tax reform The incoming government intends to increase the resources of the nation, which by 2023 will have a budget of 391.4 billion pesos (about 91.19 billion dollars today) according to the project.

In a country of 50 million inhabitants, punished by inflation (10.2% year-on-year), unemployment (11.7%) and poverty (39%), the elected government proposes a series of reforms to reduce the gap between rich and poor, in one of the most unequal countries in the region.

These initiatives generate expectations among those gathered in Parque Tercer Milenio. Like Jorge Lara, a 52-year-old Afro-descendant, university professor. “The economic and social gap is very wide. We hope that Petro can reduce it. 40 percent of the population lives in poverty. It is extremely high.”

According to the National Administrative Department of Statistics (DANE) 19.6 million people were living in poverty in the country last year.

the effective exercise to eliminate it, so it can be done

They capture two false police officers who were engaged in robbery