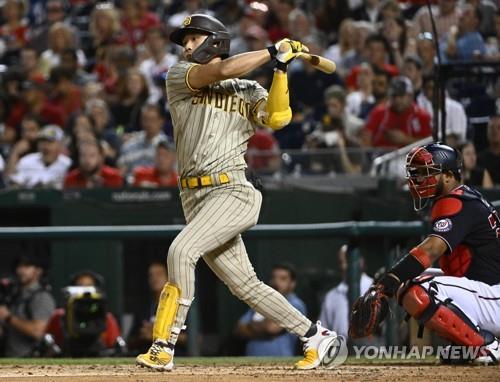 (Seoul = Yonhap News) Reporter Im Soon-hyeon = Kim Ha-seong (27, San Diego Padres) made a multi-hit (more than 2 hits in one game) in 10 games and led the team to victory.

Kim Ha-seong started as the 7th batter shortstop in the 2022 U.S. Professional Baseball Major League Baseball match against the Washington Nationals held at the Nationals Park in Washington DC, USA on the 13th (Korea time) and played an active part in 5 at-bats, 2 hits and 1 RBI.

Kim Ha-seong, who was at bat at 2nd base, raised the team’s lead by pulling a high fastball and hitting a single RBI right next to the third baseman.

It was the moment when he was a hitter in five consecutive games and RBI in three games in a row.

Kim Ha-seong immediately succeeded in stealing base and advanced to second base, but failed to score due to a follow-up hit. Kim Ha-sung’s season steals increased to eight.

Kim Ha-seong, who struck out in the 5th and retired with a ground ball in the 6th, hit a double next to left fielder in the 8th.

Kim Ha-seong recorded a multi-hit in 10 games after hitting 4 hits against the Colorado Rockies on the 3rd with this hit.

He also doubled in four games in a row since the San Francisco Giants on the 9th.

However, there was a disappointing scene that is seldom seen in defense.

In the 6th inning, he made a run-off crisis by missing a batting ground ball at first base.

On this day, the San Diego batters struggled with Fernando Tatis Jr.’s ‘prohibited drug scandal’, pulling out 14 hits, including two home runs, in a chaotic atmosphere.

15 small desserts to slip into the lunch box