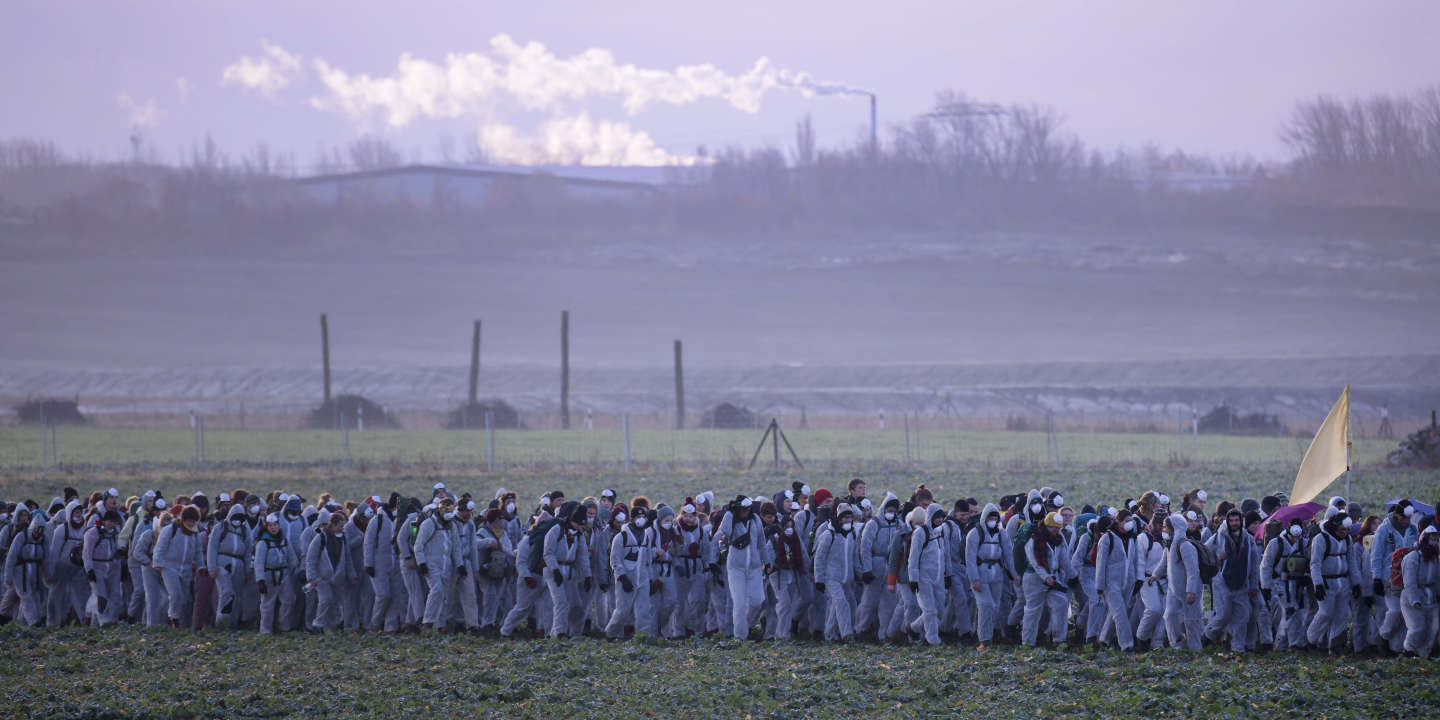 In front of Leipzig station, around fifty students and high school students gathered. It’s Sunday, but the local branch of the Fridays for Future movement, which organizes demonstrations on Fridays at the call of activist Greta Thunberg, made an exception to its usual calendar to take advantage of the presence, a few kilometers from there, from the Chaos Communication Camp (CCC).

Organized each year for thirty-six years, this gigantic gathering of hackers, activists and activists – 18,000 participants, dozens of conferences around the clock – invades the Leipzig convention center for four days, in an atmosphere that is both anarcho-libertarian and very family oriented. For the first time, the slogan of the 2019 edition is devoted to the environment: “Resource exhaustion”, a reference both to a computer attack technique and to the preservation of the planet.

“It makes sense: this is a major issue, and the environmental movement is a highlight of the year, right? “, notes, hair dyed pink and megaphone in hand, Rune, one of the organizers of the demonstration. “In any case, we are very happy that the CCC opened its doors to us and supports us. “

The conference program gave pride of place to environmental themes and organizations such as Fridays for Future or Extinction rebellion, which each hosted one of the main conferences. The audience for the event, marked on the far left, is quite sensitive to environmental issues. The results of the year of Fridays for the Future were sold out; a conference on how scientists build their climate models also had to refuse the world.

Safety of power plants and the right to repair

But while the CAC has made room for its environmental agenda, it has done it in its own way. In this mass of computer security, we could for example discover long lists of vulnerabilities affecting the on-board systems used to manage the turbines of power plants. Do not panic : “These flaws do not allow blocking a power plant, or cutting the power of a city”, relativized Radu Motspan, the author of the study. Some of them have been corrected; for others, it is up to plant managers to carry out checks. The researcher and his associates have produced a small turnkey guide to help them: “No need to hire expensive consultants, you can do it all yourself. “

This “do it yourself” spirit, omnipresent in hacker culture in general and at the CCC in particular, easily lends itself to an environmental translation. The collective Runder Tisch Reparatur, which campaigns for the adoption at European level of a “right to repair”, was thus invited for the first time to the conference. The philosophy of the movement, which aims above all to reduce the amount of waste produced by obsolescence whether or not it is programmed, is very similar to that of the free software movement, say Eduard and Erik, who run the stand of the ‘association. “An object that you cannot repair does not really belong to you”, they argue, just like the developers of free software believe that software that you cannot modify yourself deprives you of certain freedoms.

But the main issue, at the heart of many conferences during the four days of the CCC, is that of the energy impact of the Internet. No one in the aisles of the Leipzig congress center plans to cut down on Internet use; but everyone concedes that the grid consumes a lot of electricity unnecessarily, or using too much fossil fuel. “There are simple things to do to improve the carbon footprint of a site or service”said Chris Adams, environmental activist and member of the Green Web Foundation. “If your service uses Amazon Web Service [AWS, service d’informatique dématérialisée très populaire], you can for example choose the data center you want to use. The one assigned to you by default may be in a country that produces little renewable electricity and uses a lot of coal for its power plants … “

Tools also exist to take advantage of old but recently updated possibilities, such as off-peak hours at night, where electricity is both cheaper and cheaper from an environmental point of view. A digital equivalent of ancient programmers that launch laundry at night, Chris Adams extols the merits of the Low Carbon Kubernetes Scheduler, a tool that optimizes the power consumption of a server over time to limit its impact on the environment.

However, the “greenest” electricity remains that which we do not consume. There too, promising solutions exist: Hannes Mehnert, a German computer scientist, presented at the opening of the CCC his MirageOS project, an operating system for ultra-minimalist servers, coded in a language renowned for its lightness, and which runs each process in a dedicated virtual machine. A radical approach – and reserved for connoisseurs – which allows the software to embed only the bare minimum of lines of code in each compiled version. “Reducing complexity mathematically reduces the number of calculation operations required”says Mehnert. result: “A drastically falling carbon footprint, with ten times less computing power used by the processor, and up to twenty-five times less memory used”, according to his measurements.

See Also:  In Russia, the Kremlin hunts down data collectors

Above all, and this is a strong argument in a conference dedicated above all to computer security, minimalism is also a real advantage in terms of potential vulnerabilities: the more compact a code, the less it risks containing flaws or errors . And memory-efficient operating systems are also better protected, with many security vulnerabilities exploiting cases of machine memory overflow.

Beyond the technical issues, the alliance between environmental and privacy activists seemed to take shape, down to the smallest detail – in the halls, stencils denouncing the consumption of CO2 succeeding others explaining that each human being generates, on average, 1.7 MB of data per second. The posters of the anarchist or antifascist movements were also mixed with the flyers of the collective Hackers against Climate Change, which attracted the curious with a joke typical of the place: “Cli / mate crisis is real”, in reference to the Club-Mate, ubiquitous drink at the event.

This community of views between hackers and climate activists is hardly surprising in Germany, where both movements are very present, and even less in Leipzig, the flagship city of the former GDR, where the pre-Internet mass surveillance tools of the Stasi were also directed against the environmental militants in the years 1980. Certain ecological movements feel naturally close to the anarchist spirit of the German hackers of Chaos Computer Club, which organizes the CCC: a conference animated by Extinction rebellion explained thus by the details of the security measures, but also the way in which the movement had freed itself from the tools offered by Facebook, Google or Amazon, suspected both of complicity in mass surveillance and of green washing.

However, in this global atmosphere of sacred union, some questions remained unanswered. In some specific cases, better IT security can also consume more resources. A conference devoted to encrypted messaging thus presented many tools which make it possible to reinforce the confidentiality of exchanges, but also require using more computing power, to encrypt or decrypt messages, or even request the sending of large quantities of data to scramble the origin or volume of a message. This first CCC under the sign of environmental protection did not really address this contradiction – pending, perhaps, a next edition?

See Also:  Coronavirus, Bolsonaro appears in public with a mask: a judge has forced him
Read also In Leipzig, the future of secure messaging in question