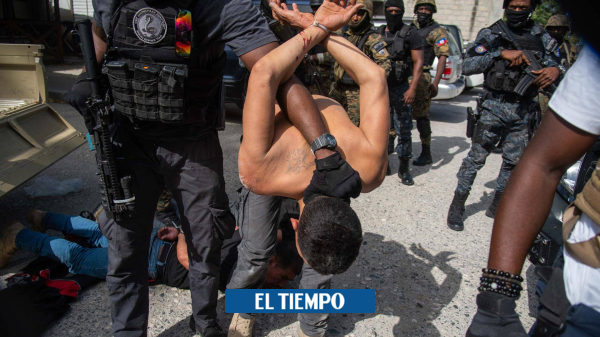 The situation of the 18 former Colombian military prisoners in Haiti for the assassination of the president Jovenel Moïse gets complicated. They have already completed 22 days without any type of legal support and without anyone knowing what their situation is, in terms of Human Rights.

EL TIEMPO established that the delegation of the Office of the Ombudsman of Colombia, which was sent to Port-au-Prince to provide advice in these two camps, he has not been able to gain access to former military personnel, described in Haiti as murderers and mercenaries.

(About this theme: Key videos of Colombian ex-military prisoners in Haiti appear)

Carlos Camargo, Ombudsman, asked the OAS for help to gain access to the ex-military prisoners in Haiti.

On Monday, both that delegation and that of the Colombian Foreign Ministry had some difficulties entering the island. And when they finally made it, they did not let them go to jail in which the ex-military are detained.

This situation led Carlos Camargo, Ombudsman, will send a letter to the OAS asking for urgent support.

(In context: Haiti: Ecuadorian says he financed change of command, not murder)

The Ombudsman’s Office asks Almagro for support so that the visit is authorized, so that they can communicate with the detainees and give them support.

“We were denied the visit because we did not have an authorization from the Ministry of Justice, which has been requested by the Colombian Foreign Ministry through the Haitian embassy in Colombia”: Camargo.

“Since July 7, a group of 18 Colombians are detained in the dungeons of the Central Judicial Police, in isolation conditions, without contact with their relatives and without any type of legal technical defense. To date there has been no judicial control of the detention, “Camargo tells Luis Almagro, secretary general of the OAS.

And he adds: “Unfortunately we have been denied the visit for not having an authorization from the Ministry of Justice, which has been requested by the Colombian Foreign Ministry through the Haitian embassy in Colombia, by a verbal note from the July 16thUntil now we have no answer. “

Therefore, he asks Almagro for support so that he authorize the visit, so that they can communicate with the detainees and give them support.

(We invite you to read: They are looking for a former Haitian judge, key in investigation for the assassination)

Luis Almagro has headed the OAS General Secretariat since May 2015.

EL TIEMPO established that the Foreign Ministry delegation could only have access to the ex-military for a few minutes.

Furthermore, the lawyer for 15 families and the three widows of the murdered ex-military men, has not been able to have access to them. There has not even been any progress in the repatriation of the bodies.