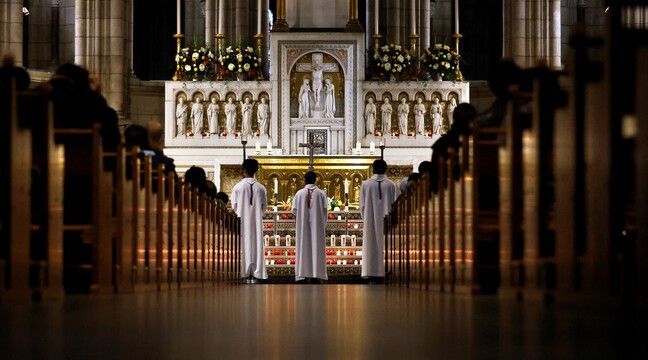 Just over half (51%) of French men and women do not believe in God and the Covid-19 epidemic has had little effect on religious practice, according to an Ifop survey for the Association of Journalists of information on religions (Ajir) published this Thursday. To the question “Do you personally believe in God?” “, 51% of respondents answered” no “(against 44% in 2011 and 2004). 66% of the French believed in God in 1947, according to an Ifop poll at the time.

In detail, the most believers are among those 65 years and over (58%) then among the 18-34 years (48%). Has the Covid-19 epidemic brought them closer to a religious practice? “No”, say the interviewees, at 91%. Only 9% answer in the affirmative. Asked about the fire at Notre-Dame de Paris cathedral in 2019, 79% replied that this event did not awaken in them any “religious feeling” or “spiritual fiber”. But 21% feel the opposite.

Another lesson: French people speak less and less about family religion: they are 38%, compared to 58% in November 2009. And only 29% talk about it with their friends (49% in 2009). The study is also interested in their opinion on Pope Francis; 41% believe that he defends the values ​​of Catholicism “rather well”, 44% that he defends them “neither good nor bad” and 15% “rather badly”. On the other hand, 68% of French people believe that religions “can help to transmit to young people positive landmarks and values: respect for others, tolerance, generosity, responsibility.” 77% thought so in 2009.

For 54% of those questioned, “all religions are equal” (62% in 2007). For 47% of French people, “the message and values ​​of Christianity are still relevant today”. And for 47%, “religions can make a positive contribution to major societal debates: bioethics, moralization of the economy, family” (against 51% in 2009). The survey was conducted from August 24 to 25 with a sample of 1,028 people, representative of the French population aged 18 and over by self-administered online questionnaire, according to the quota method.