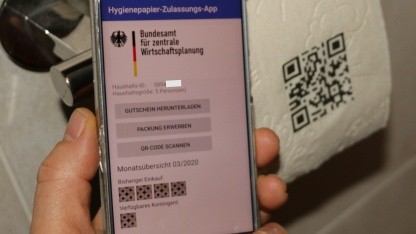 With high-tech against hamster purchases: The federal government wants to electronically ration the sale of important goods because of the ongoing Cortana pandemic. With the help of a newly developed app based on blockchain, toilet paper should initially only be dispensed in precisely defined quantities per household. The project was launched during the federal government’s hackathon “Wirvsvirus” proposed and should now be developed with priority and brought to the market. “We finally want to show that blockchain and AI are not just fashionable buzzwords, but can help when the going gets tough.”, Managing Director André Müller-Wambach from the start-up Bogroll Analytics in Wiesbaden told Golem.de.

The concept: Every household that has downloaded the app can register with the Federal Office for Central Economic Planning (BzW) and get vouchers (tokens) for toilet paper packs according to the size of the household. The BzW receives the household size data from the respective registration offices. Registration with the BzW is possible via De-Mail, with an electronic ID card or common authentication methods such as Video-Ident or Post-Ident. AI-based procedures such as ID identification should also be permitted in order to cope with the rush for the vouchers.

The BzW is said to have already reserved the necessary server capacities at Amazon’s AWS cloud service in order to be able to handle the requests of more than 40 million private households. The more than three million companies in Germany, on the other hand, should get their tokens from the Chambers of Commerce and Industry, unless they can be supplied via wholesale anyway.

With the electronic vouchers, it is then possible to legally purchase toilet paper in drugstores and retail stores. In the future, each package should be marked with an RFID chip that stores the number of rolls and their positions. Those who prefer thicker paper can buy fewer rolls. For buyers of recycled paper, on the other hand, there should be a higher quota. Blockchain technology can be used to pinpoint exactly where each pack is located and who bought it. The highlight: With the help of printed QR codes, you can even check whether the paper is not just hoarded, but actually used.

The startup Bogroll Analytics is behind the concept. Müller-Wambach explained Golem.de the advantages of the app: “The population can do without hamster or panic purchases if they know that there is no shortage of certain goods and there is enough for everyone. We want to achieve this with blockchain-controlled toilet paper sales.” What used to be controlled with paper-printed grocery cards or reference certificates can now be done much more conveniently and easily using a digital method. The blockchain itself works according to the principle of a toilet paper roll: “You can’t just take a sheet out in between and wind up the roll again. You notice immediately.”

Experts believe that the Bogroll Analytics concept could work. The consumer behavior researcher Kit Yarrow said to the US IT portal Ars Technica: “We are social beings. In such unprecedented and uncertain times, we look at other people to get clues about what to do. Unfortunately, other people do crazy things, so we think we should do that too.” Photos of empty toilet paper shelves on social media or in the press do the rest, said Yarrow.

Since the wide shelves in the empty state made a bigger impression than an empty tuna shelf, the effect is enhanced. If someone came out of a store with several packs of toilet paper, it would be a much more dramatic photo than if they came out with a bag of tuna, the behavioral scientist said.

With the new app, such dramatic recordings should be a thing of the past in the future, believes Müller-Wambach. But the app can do much more, says the computer scientist.

Who is Mabel Cabeza, the ex-functionary controversy of the Department of Health?