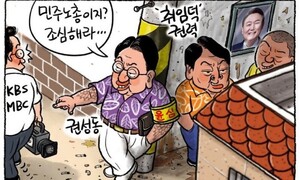 On the 14th, Kwon Seong-dong, floor leader of the People’s Power, said, “Aren’t KBS and MBC broadcasts controlled by the media union?” While the opposition and opposition parties struggled for the chairman of the overdefense (Science, Technology, Information, Broadcasting and Communications Committee) in the process of negotiating the original composition in the second half of the National Assembly, the issue of improving the governance structure of public broadcasting is also entangled. The Kyunghyang Shinmun and the Hankyoreh published editorials related to the remarks.

The workers’ union of a subcontractor of Daewoo Shipbuilding & Marine Engineering (DSME) celebrated its 44th day of occupancy of ships. On that day, the Ministry of Employment and Labor and the Minister of Trade, Industry and Energy declared the demonstration illegal. The Chosun Ilbo and Kookmin Ilbo emphasized ‘illegal occupation’ and ordered a hard response, while the Kyunghyang Shinmun said, “Don’t just emphasize the illegality of strikes, but create an atmosphere to solve problems through dialogue.”

The floor leader Kwon said, “Isn’t MBC also owned by people belonging to the Confederation of Trade Unions? In response, the Hankyoreh in an editorial “Isn’t Kwon Seong-dong’s remarks from ‘arrogant press’ Kwon Seong-dong insiders in control of broadcasting? Watching it itself reveals a shallow understanding of the media.”

The Hankyoreh said, “The outright ‘union hatred’ is also a problem.” During the presidential campaign in March, President Yoon Seok-yeol criticized the National Press Union as a ‘leader among the frontline troops’ of the strong union vanguard led by the Democratic Party of Korea and said, ‘I will fix it first’. I can’t help but remember what he said.”

In response to Kwon’s remark, “The president has the right to appoint the president, but the majority of union members of the KCTU will listen to what the president has to say about appointing the president,” the Hankyoreh said, “The relentless remarks of the Lee Myung-bak and Park Geun-hye regimes led to the relentless efforts of the government to dominate public broadcasting. “Many people will remember the offensive, mass forced distribution and dismissal, and as a result, public broadcasting news was ignored by the people.”

The Kyunghyang Shinmun also said in an editorial, “In the press union, which is an industry-specific union, individual members can join and leave voluntarily, and private broadcasting, press channels, and general programming channels are also affiliated with it. have. The ruling party leader’s statement that public broadcasting is in the hands of the union without any basis is an obvious distortion.”

The newspaper said, “It’s like a reenactment of the old ‘KCC and overdefense battle’.” In 2008, KBS appointed CEO Jeong Yeon-joo, and in 2017, Kang Gyu-hyung, a director recommended by the Liberty Korea Party, was dismissed for misappropriation of corporate cards and won the case. He pointed out, “This overdefense confrontation is also a fight between the ruling and opposition parties over concerns about control of broadcasting.”

Securing the independence of public broadcasting is an issue. The Kyunghyang Shinmun reported, “The ultimate answer is to change the governance structure of public broadcasting companies.” “The media and the media community to make transparent the composition of the board of directors of KBS, EBS, and Broadcasting Culture Promotion Association (MBC major shareholder) and expand the quorum for the appointment of presidents to more than three-fifths. It has been more than 10 years since civil society demanded it.”

The Kyunghyang Shinmun argued, “How long will public broadcasters continue to repeat the old fashions and debates that become ‘government spoils’? The Hankyoreh also argued, “If public broadcasting is not to become a ‘loot’, the board of directors of public broadcasting, which is filled with recommendations for sharing between the ruling and opposition parties, must be changed.”

Kyunghyang, South Korea claim the abolition of the death penalty

The case being dealt with by the Constitutional Court this time is a constitutional complaint filed by Mr. A, who was sentenced to death in the first trial for murder. Person A has since been sentenced to life imprisonment by the Supreme Court.

The Hankook Ilbo editorial, “It is time to think about abolishing the death penalty, which has been brought to the Constitutional Court again,” said, “The death penalty is the supreme punishment in the courts that deprives criminals of their lives and permanently segregates them from society. Now is the time to seriously consider the abolition of the death penalty.”

“In the argument today, Professor Koh Hak-soo of Seoul National University said that there is no time-series data showing detailed crimes before and after execution. said

The Kyunghyang Shinmun also said in an editorial “The death penalty on the third court of the Constitutional Court, this time it must be abolished.” “A survey published by the National Human Rights Commission of Korea in 2018 showed that 66.9% of citizens agreed to abolish the death penalty if an alternative punishment was introduced.” “The government also voted in favor of the resolution of the ‘execution moratorium’ for the first time at the 3rd Committee of the 75th UN General Assembly in 2020,” he said. By supporting them, we are helping them overcome their pain and stand up.”

The newspaper argued, “As an alternative to the abolition of the death penalty, ‘life sentence without parole’ is suggested.

Chosun and Kookmin Ilbo “Illegal” vs. tendencies “Resolve through dialogue”

The Chosun Ilbo criticized the government for stating that the sit-down was ‘illegal’ and not taking a hardline response. In the editorial “The union of a partner company can’t help but paralyze the world’s largest shipyard,” the government said, “(The government) did not give a clear answer to the company’s request to use public power to thoroughly investigate illegal activities and correct the legal order.” criticized

The Chosun Ilbo said, “Daewoo Shipbuilding, as well as executives and employees of partner companies, are holding street events and rallies to appeal for the suspension of strike and normal operation, but the situation cannot be resolved to this extent. A contest was held, and about 40 left-wing civic groups, including Minbyun, said they would send the ‘Hope Bus’ to Daewoo Shipbuilding and support the strike.”

The newspaper said, “This situation is largely due to the fact that the working hours and income of subcontractors’ employees have greatly decreased due to the Moon Jae-in administration’s introduction of a uniform 52-hour week system without considering the specifics of each industry. A company that is run at the expense of the people is telling me to only give out money,” he said. He added, “Even if such a reckless situation occurs, the government will only call it ‘labor reform’ in words.”

Kookmin Ilbo’s editorial, “The illegal occupation of Daewoo Shipbuilding’s subcontractor union is unacceptable,” and said, “They need to stop their illegal siege and leave the results of negotiations between the subcontractor and labor union and make them pay a price commensurate with the illegal act.” Now is the time to end the long-standing practice of the labor community that is immortal,” he said.

The Kyunghyang Shinmun, on the other hand, said, “The management method of making profits by slashing wages is no longer valid.” “Even though Daewoo Shipbuilding has declared an emergency management system, the strike is neglected because it is a labor-management problem for subcontractors.” criticized “It is deferring responsibility to Korea Development Bank, the state-run bank and the largest shareholder of creditors with a 55.7 percent stake in Daewoo Shipbuilding.”

The Kyunghyang Shinmun reported, “The KDB must make a decision so that Daewoo Shipbuilding can raise the subcontractor’s subcontractor’s unit price (prepared money) and lead to a wage increase. do,” he claimed.

US President Joe Biden to retire in 1st term 4 years He is enthusiastic in the 2nd term, but the political economy environment is too harsh (1/4) | JBpress