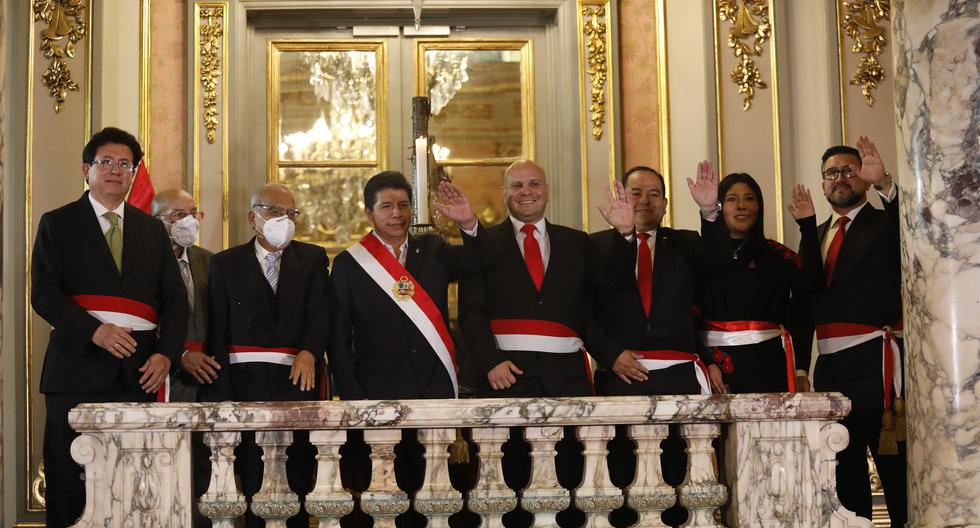 Once he agreed, months ago, that Torres would leave before the message to the Nation (this is what our sources told us), he thought of more than one candidate. Alejandro Salas formerly of Culture, Félix Chero still of Justice, Roberto Sánchez still of Foreign Trade and Tourism and Betssy Chávez, censored from Labor but beloved operator from Castilian; They are the names that our sources, without being sure of what the president would finally decide; they mentioned us as the natural candidates. For the cornered president, with little serenity and room for maneuver, the country’s prospects are reduced to what he has at hand.

Despite the narrowness of Castillo yes there was a candidate with whom he met several times. Some appear in the registry of visits, others do not. But there were several, before and after the letter of resignation of Hannibal Torres, on Wednesday the 3rd. I am referring to the censored former Minister of the Interior, Dimitri Senmache. This, according to sources close to him, raised ideas without calling them conditions; but this is how they could be understood: that Castillo made it clear that he conceived of this stage as a ‘transition’ (that is, that he gave a public signal that he assumed that his government was not enough for much more); make changes in Defense, Interior, Economy, Production and Housing; forget about Vladimir Cerrón and the quotas; and give conciliation messages to the Congressthe press and public opinion.

Senmache, seeing the indecision of his interlocutor and assuming that he was not the only one ‘rocked’ with the possibility of being premier, even suggested to peter castle that he appoint him once and for all, informally, to give him the necessary support to convene cadres. Nothing like that happened. Castillo convinced Torres to stay and did not make the changes that Senmache suggested and that he would have suggested any other willing to introduce certain mitigating factors to the macabre picture of government corruption and inefficiency.

Of course Dimitri he was not the only one in talks with the president. There is another letter from the environment, Gonzalo Garcia Nunez. He was a candidate for Humala’s first vice presidency in 2006, when he lost to Alan García. He is an engineer, businessman, and frustrated candidate for mayor of Lima from humalism. Since 2021 he approached the government (he has 3 registered visits to the presidential office last year) and, according to my leftist sources, in recent weeks he established a closer relationship with the president, through adviser Alberto Mendieta, who was also in the humalist orbit.

It’s more, Castillo has already made some changes that are along the lines of what would please Garcia Nunezhow to sign Kurt Burneo in the MEF, another former humalismo official (he was Minister of Production). the orthodoxy of Oscar Graham, severe guardian of the fiscal box, had already reached the peak of Castillismo. Burneo promises a heterodoxy that, the presidential environment believes, will be more in keeping with the circumstances.

Other changes, like Woman y Environment, apparently they were evaluated but did not materialize. That Geiner Alvarado come out of living placehe was too but not that he went to the MTC. This transit is the freshest and most irresponsible of all: Alvarado is in the crosshairs of several corruption investigations involving Housing and it has been known since 2021 that his signing corresponds to the share of the Chotano environment. Transferring it to the MTC, which was the epicenter of the corruption, is a confrontation.

A surprise, even to my diplomatic sources, was the departure of Cesar Landa of chancellery. They assure me that he was just notified of his change hours before. Miguel Angel Rodriguez Mackay he has come by a curious route to government. He told me about it a few months ago when he was an adviser to the fleeting ex-minister of Agriculture, Javier Arce Alvarado. In the campaign he supported Keiko and was a harsh critic of Castillo. Gustavo Pachecoformer Toledista congressman, baptized as ‘chauchiller’ for his pompous oratory at the head of the Foreign Relations Commissionwas a successful candidate for the Andean Parliament (PA) for Renovación Popular and signed Mackay as an advisor.

In the PA, Mackay made friends with Arce, who is a parliamentarian for Peru Libre and he was recruited to Agriculture. Since then, the academic and frequent guest as an analyst of international issues on TV has orbited the government. His case must be that of the academic who wants to prove, with all rights, the intensity of power. Excuse the figure, but it is irrepressible: in the government of peter castlethe advisor to the ‘chauchiller’ became chancellor.

I don’t know if García, in case his signing were finalized or, any other, would bet on keeping Willy Huerta in the Interior, a minister who makes merits to be accused of obstructing Justice. I also do not know if the engineer César Paniagua has set cleanliness conditions in Housing. I called García, spoke briefly with him and he did not rule out or confirm the possibility of being premier.

Months ago when I asked friends from the government about possible cabinet adjustments, they told me not to rule out the possibility that no one would be signed, and that the signings were actually castling. Moving Alvarado to the MTC is not a castling, but a replenishment of Chotana influence to that portfolio. But move Alejandro Salas from Culture to Work, and Betssy Chávez who had been from Work, move her to Culture; it is a classic castling, no less than with the most stalwart ministers.

In Labor, important regulatory changes are committed to the government’s trade union clientelism. The business associations have already withdrawn from the National Labor Council, and Castillo has chosen to have an obedient minister there. In the same way, in Culture, Salas approved a controversial norm that includes the ronderos in the list of original communities. Chávez will undoubtedly protect those changes.

The Congress waited, first to have its new board of directors ready; then, for Castillo to adjust his cabinet; to check what surveillance weapons he uses within his opponent’s arsenal.

“I have a very fat little secret …”: Wilma González’s mother sent a harsh warning to her daughter and Gonzalo Egas