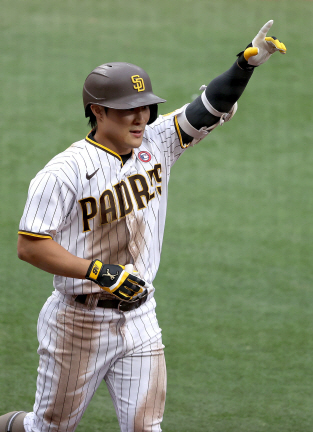 Ha-seong Kim (27, San Diego Padres) and Shohei Ohtani (28, Los Angeles Angels), who are active in the MLB (Major League Baseball) of the United States, led the team to victory by running a home run in parallel.

On the 30th, Kim Ha-seong started the game against the Pittsburgh Pirates at PNC Park in Pittsburgh, Pennsylvania, USA, and hit a two-run homer over the left fence in the third inning, which was behind 0-2. This was his third home run of the season, three days after the game against the Cincinnati Reds on the 27th. It was his 11th home run in MLB career. Ha-seong Kim hit the 149km/h fast ball of Pittsburgh right-hander Jack Thompson to record his 10th RBI of the season. Then, in the 2nd at-bat in the 5th inning, 1 company, 1 base, in the 2nd at-bat, he made a multi-hit game for two consecutive games (two or more hits in one game).

Unlike last year, when Kim Ha-seong, who is in his second year in the MLB, had difficulty adapting to pitching, this season, he warms up the bat from the beginning and makes fans excited.

Kim Ha-seong, who swept three runs by hitting three runs for the first time since entering MLB the day before, recorded a multi-hit that day, raising his batting average to 0.273. In particular, in the last three games, he showed off a sense of batting, hitting 6 hits in 11 at-bats, 2 homers, and 7 RBIs. On this day, San Diego won 7-3 thanks to Kim Ha-seong’s performance and ran four straight wins.

On that day, Ohtani also started as the 4th hitter in a visiting game against the Chicago White Sox at Chicago’s Guaranteed Late Field, Illinois, and hit two hits in five at-bats. He hit a home run from his first inning at bat, leading 1-0. Ohtani, who entered the plate after two runs, hit the high fastball of the opponent’s starting pitcher Lucas Giolito’s fifth pitch and crossed the left fence. Then, in the 8th inning, he hit the left center and recorded a multi-hit. He also jumped his season batting average from 0.238 to 0.247. The Angels beat the White Sox 5-1.

This is the true religion of the hero of the series (Tash Ma Tash), the artist Nasser Al-Qasabi, which he kept secret and did not reveal to anyone.. (serious details)

Open research results for Omicron infection. Will BA.1 have enough immunity to protect against BA.4/BA.5?