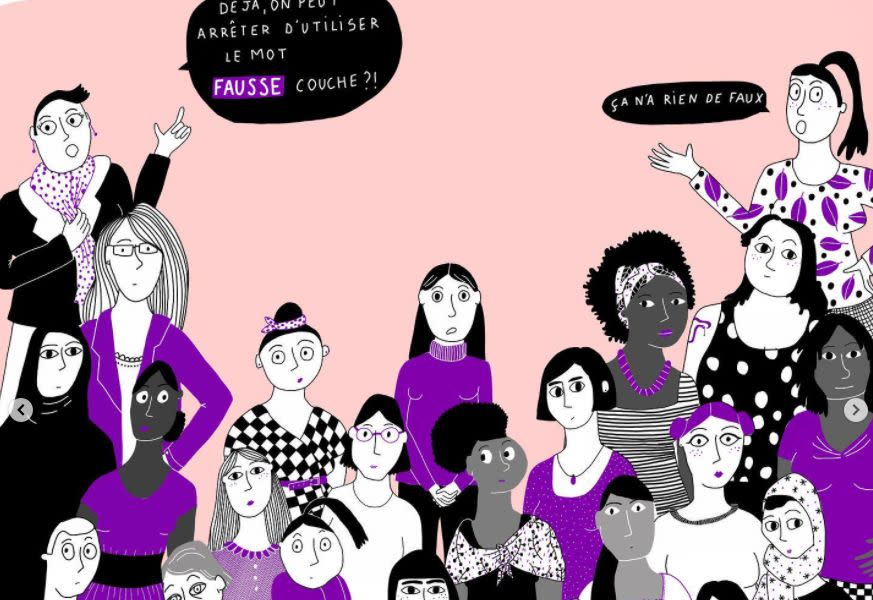 MATERNITY – “The only thing we are told when we get pregnant is: ‘don’t say it too soon, just in case'”, explains Sandra Lorenzo, member of the collective “Miscarriage, true experience” at the origin of a column published in The world Sunday March 27. “Just in case”: an expression that summarizes in three words the omerta around the miscarriages in France.

Title “Let’s get rid of the phrase ‘having a miscarriage’, because nothing is wrong, and everything is true”the platform of the six founders (Judith Aquien, Fanny de Font-Réaulx, Mathilde Lemiesle, Sandra Lorenzo, Anna N’Diaye, Paloma Stefani) of the collective challenges the taboo of “natural pregnancy terminations”. In France, one in four pregnancies ends during the first trimester.

“We necessarily all know someone in our entourage who has gone through this ordeal, whether it is a mother, a sister, a cousin, a friend or even a neighbor”, underlines for The HuffPostjournalist Sandra Lorenzo, author of A miscarriage like no other.

Use the term “natural termination of pregnancy”

In order to have miscarriage recognized as a social issue, the collective is campaigning to speak of a “natural termination of pregnancy”. Sandra Lorenzo explains: “There has been a lot of thought about the use of the term miscarriage. Its interest is to be an expression understood by everyone, but it remains problematic in many respects”. “Just the phrase ‘having a miscarriage’ sounds like it was a voluntary act. I would say more that we cross it or that we undergo it”, continues the journalist. The collective specifies in the forum that the expression “makes you feel guilty and makes you invisible”.

To go through a natural termination of pregnancy is indeed to be confronted with silence and isolation. “It’s difficult, because it doesn’t exist. We confiscate the emotions that are crossed”, supports Sandra Lorenzo. Especially since the majority of miscarriages occur in the first trimester, “when you shouldn’t talk about your pregnancy”.

“When it happened to me, I knew it existed but for me it was science fiction. I really wondered what was going to happen”, recalls the journalist.

“A moment of fragility”

However, “this is an event anything but trivial”, recalls the forum. “It’s a fragile moment for women. Many of them say, for example, that they have suffered obstetric violence. They may be poorly received in emergencies, less well considered. Especially since the care is done in the maternity ward, where we are surrounded by round bellies”, explains Sandra Lorenzo.

Faced with the lack of information and support, the group’s first request is to set up a national multimedia information campaign. Sandra Lorenzo affirms it: “We do not want to scare, we simply want to say that it is a possibility of pregnancy. The more we know, the less we will be helpless”.

Among the other measures proposed, the group requires the establishment of a paid work stoppage of at least three days for women and their spouses, as well as the possibility of reimbursed psychological follow-up. “I am amazed at the number of women who experience this ordeal in their workplace. It’s not just an expulsion, it’s also contractions, bleeding…”, testifies the author. “There are also a lot of testimonies showing that the partner is pushed aside at the time of the miscarriage. We didn’t look at him, we didn’t talk to him. It can be difficult to live, especially in the course LDCs”, she completes.

The collective also wants a booklet on natural pregnancy termination to be made available in each maternity ward and teaching on the subject to be included in sex education courses. Finally, it proposes the establishment of dedicated training courses for midwives and gynecologists-obstetricians as well as an increase in hospital budgets for better management of natural terminations of pregnancy.

“The better we are accompanied, the more likely we are not to be traumatized”, concludes Sandra Lorenzo who nevertheless recalls that each experience is different. In addition to the platform signed by a hundred personalities, a petition is available online to provide support. It has already collected nearly 4,000 signatures.

See also on The HuffPost: “The miscarriage, this mother lived it alone, despite the care of those around her”

This article was originally published on The HuffPost and has been updated.

Nicole Neumann referred to her alleged conflict with Fabián Cubero: “You will have to solve it at the psychologist”

Today’s earthquakes in Peru, according to the Geophysical Institute of Peru: check here the record of movements of March 28 | Tremor in Peru | Tremor in Lima | TDEX | NMR | PERU