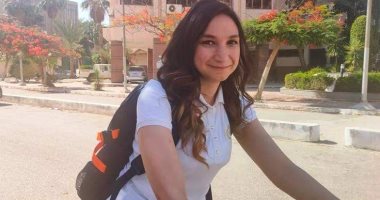 Al-Youm Al-Sabaa TV presented a live broadcast from inside Zagazig University Hospital to a young doctor, a faculty member at the Faculty of Medicine, who decided to go to work daily, using the wheel as a kind of sports.

Nadine Zanati, an assistant teacher in the radiology department, says that she loves to play sports, and in light of the Corona crisis, the matter has become very difficult, so she decided to practice cycling, a hobby she has had for years, adding that her fellow doctors encouraged her to do so, especially Dr. Nader Al-Ayouti, who had previously been going The hospital by bicycle is free from the shackles of the angel car.

She indicated that in the past, the traffic jam was one of the difficulties that faced them in going to the hospital, now the trip is less than 7 minutes, and that she loves the hobby of riding a bike in the early hours of the morning, noting that she sometimes looks surprised by the community, but her fellow doctors are the most supportive .

The young doctor called on her young peers to use the bicycle to maintain their health, and to face the difficulties of public transportation and the pollution of the environment.