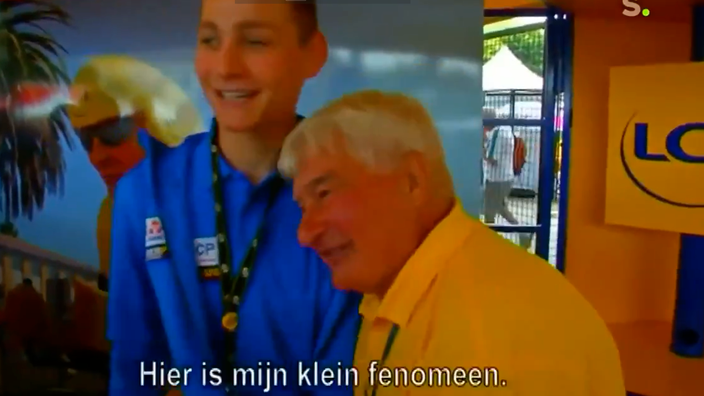 LE SCAN SPORT – In 2014, five years before his death, the legend of the Tour de France proudly presented his grandson, the new leader of the event since Sunday.

On Sunday, Mathieu van der Poel achieved for his first appearance on the Tour de France what his grandfather Raymond Poulidor had never managed to do in 14 editions on the Grand Boucle: one day wear the yellow jersey. The rider of the formation (Alpecin-Fenix) made a double blow by winning Mûr-de-Bretagne with panache, with a stage victory and the leader’s jersey on the shoulders.

“What do you look like to me, when I was young… It’s amazing”,

At the end of his day, the Dutchman did not forget to salute the memory of his grandfather who had high hopes for him among professional runners a few years ago. The Twitter account Le Gruppetto took over a moving sequence from 2014 in which “saved»Presented his brilliant descendants with emotion:«Here is my little phenomenon»He blurted out twice, presenting Mathieu van der Poel to members of the caravan before announcing him as the future winner of the Tour de France. “What do you look like to me when I was young… it’s amazing“, Laughs the French champion who died in November 2019.

Raymond Poulidor left too early to see his grandson triumph on the roads of the Grande Boucle. The new yellow jersey had raised a finger in the direction of his grandfather when crossing the finish line in Brittany before bursting into tears, overwhelmed by a torrent of emotions.

Since the start of the event, the leader of the classification has continued to pay tribute to Raymond Poulidor. His team had thus worn the yellow and purple jersey that his ancestor had worn in his time, multiplying the winks in his memory.