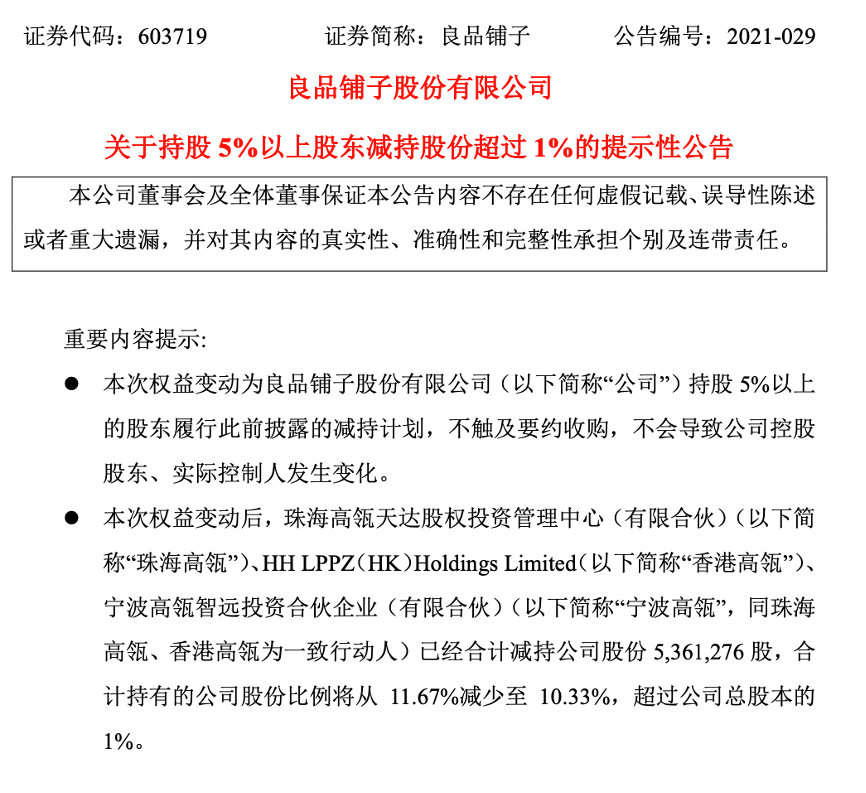 Original title: Hillhouse’s massive reduction in holdings is here, and the former “darling” of capital has become “outcast”?

On February 27 this year,Liangpin shopIt has been disclosed that Hillhouse’s shareholding reduction plan: plans to reduce its holdings not to exceed 24.06 million shares, accounting for 6% of the total share capital. Before the implementation of the share reduction plan,Zhuhai Hillhouse, Hong Kong Hillhouse, and Ningbo Hillhouse hold a total of 46,800,300 shares of the company’s shares, accounting for 11.67% of the company’s total equity.

Hillhouse Capital invested more than 800 million yuan in September 2017Liangpin shop, And use its own resource advantages to continue to empower, and work hand in hand with Liangpin Shop to develop the high-end market. After being listed on the market, BESTORE has been advancing all the way, harvesting 15 consecutive daily limits, and its market value once exceeded 30 billion yuan, and then it oscillated and adjusted back.

As of June 8th, the closing price of the company was 50 yuan per share. According to the preliminary estimate of 46.8 million shares held by Hillhouse Capital before the reduction, the corresponding market value is 2.34 billion yuan, which is about 1.54 billion yuan compared with the initial cost of 800 million yuan. If the floating profit of yuan is calculated based on the high of 87.24 yuan per share in mid-July last year, the floating profit exceeds 3 billion yuan.

Solemnly declare: The purpose of this information released by Oriental Fortune.com is to spread more information and has nothing to do with this stand.