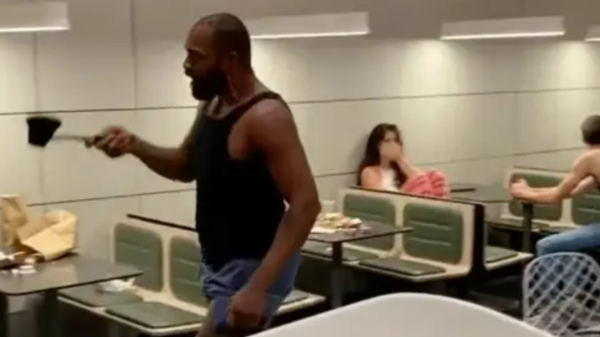 The customers of a famous fast food restaurant in New York struck terror, after a man pulled an ax out of his bag and destroyed the place and threatened those inside.

He documented a video clip and photos of the incident, which, according to eyewitnesses, began when the man, Michael Palacios, approached a young woman sitting in the restaurant and tried to talk to her, but she refused him and he went crazy.

The video showed a group of young men attacking him, punching him while he stood quietly, according to the New York Post.

Then he took an ax out of his bag and began destroying the place, smashing tables and glass walls, in a frightening sight documented by a mobile phone camera.

But Michael said that’s not the case, claiming that the violent incident stemmed from an argument with an attendee after the restaurant’s security guard refused to let him use the bathroom.

He also confirmed that he was “not deranged” and did what anyone would do in his condition, according to the New York Post.

The 30-year-old also explained that he was trying to protect himself from those who punched him, indicating that he preferred to use an ax over a pistol. “With the ax, I have my options, such as crushing the table, but with a pistol, all you do is shoot.”

The man, who was released without bail, also said, “I’m not upset.” “I’m not crazy. I just did what anyone would do when they got hit. What would you do? Take out my phone and call 911?”

“I didn’t chop them with the ax because I didn’t want to, and not just because of their good luck!” he concluded.

“Pimrapee” supports the medical group Bie MoPH to end the free marijuana vacuum. Pointed to be a threat to lure children and grandchildren into the drug cycle.