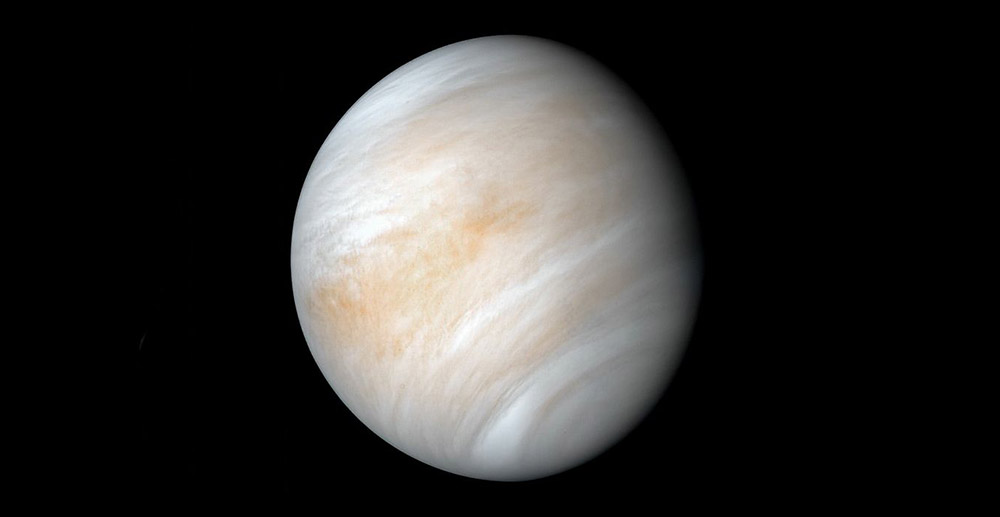 Secrets revealed: Astronomers have finally succeeded in determining some of the fundamental features of Venus more precisely – including rotational speed, axis inclination and precession. This also provides valuable information about your inner being. The radar measurements reveal, among other things, that a Venus day lasts almost eight earth months and that the length of the day on our neighboring planet fluctuates by up to 20 minutes, as the team reports in the specialist magazine “Nature Astronomy”.

The Venus is a sister of the earth in many ways – it is about the same size, similar in structure and could one day do the same life-friendly have been. And yet our close neighbor poses a riddle. Because even fundamental characteristics such as its exact speed of rotation, the inclination of its axis or the size and nature of its core are only just beginning to be known for Venus. Because the thick veil of hers the atmosphere everything veiled, even processes on its surface are difficult to research.

Radar reflections as a motion meter

Now a team led by Jean-Luc Margot from the University of California in Los Angeles has succeeded in measuring important basic features of Venus more precisely than ever before. To do this, over the past 14 years they have repeatedly sent strong radar beams from the Goldstone radio telescope in California to Venus, where they penetrate the clouds and are reflected by the surface of Venus. The reflected radiation was then recaptured by the Green Banks radio telescope in West Virginia.

“In principle, we use Venus as a gigantic disco ball, with the radio telescope as a spotlight and the landscape of the planet as millions of tiny reflectors,” explains Margot. The speckled pattern of the reflected radar beams then reveals how certain reference points on Venus’ surface move over time – and this provides information about the rotation, axis inclination and also the inertia of the planet.

The length of a day of Venus fluctuates by 20 minutes

The measurement data reveal: Venus needs an average of 243.0226 earth days for a rotation – one day therefore takes around two thirds of an earth year on our neighboring planet. But while the earthly day length only varies by milliseconds, it fluctuates considerably on Venus: one day on Venus can be around 20 minutes longer or shorter for one measurement than the next. “That probably explains why previous estimates of the length of the day were so far apart,” says Margot.

The reason for these strong fluctuations in the length of the day is probably the enormous mass and density of the Venus gas envelope. Through interactions with the planet’s surface, it influences the rotation and can slow it down or accelerate it. “Venus has around 180 times stronger atmospheric angular momentum, which means that the gas envelope contributes around 60,000 times more to the total angular momentum of the planet than that of Earth,” the researchers explain.

The new measurements also provide more accurate values ​​for the inclination and movement of the Venus axis. Accordingly, its rotation point is tilted by 2.6392 degrees compared to its orbit – significantly less than the approximately 23 degree inclination of the earth’s axis. Like the Earth, however, the Venus axis also performs slight pendulum and tumbling movements over the course of time. Because this precession is partly influenced by the mass distribution and processes in the interior of the planets, it provides valuable information about the internal nature of Venus.

As the team found, the Venus axis changes its orientation relative to the star background by around 44.58 arc seconds per year. As a result, it completes a small circle over the course of 29,000 years and takes around 3,000 years longer than Earth for such a precession cycle.

Venus core as big as that of the earth

From the combination of these values, Margot and his colleagues were also able to calculate the planet’s moment of inertia and thus a physical quantity that allows conclusions to be drawn about its internal composition. “Based on a rough two-layer model, we arrive at a radius of the Venus core of around 3,500 kilometers,” they report. However, the true core size could deviate by up to 500 kilometers due to the great uncertainties.

Should this value be confirmed, however, then Venus would not only have almost the same overall size as the Earth, but also a similarly large core. However, it is not yet known whether the Venus nucleus is solid or liquid, or whether it is divided into two different zones, as is the case with the earth. (Nature Astronomy, 2021; doi: 10.1038 / s41550-021-01339-7)