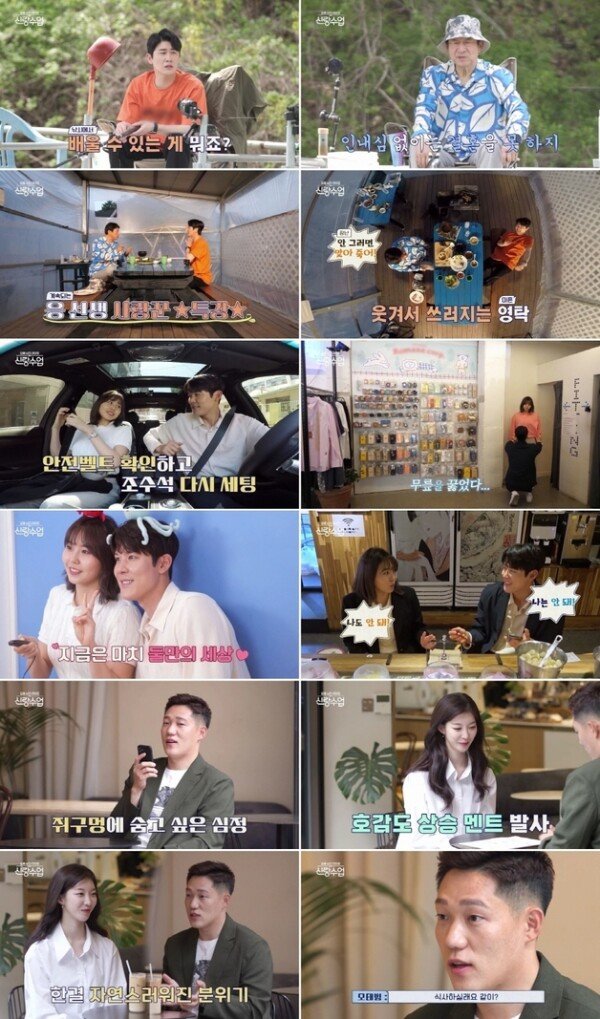 In the 17th episode of Channel A’s ‘These days of Men’s Life – Groom’s Lesson’ (hereinafter ‘Groom’s Lesson’), which was broadcast on the afternoon of the 25th, Yeong-tak and Kim Eung-soo, who had a relationship in the drama, had a fishing meeting, and Park Tae-hwan and his girlfriend Ahn Se-hyeon seemed to know. An unknown ‘some’ date, a blind date full of excitement between Mo Tae-beom and Im Sa-rang, unfolded one after another.

Young-tak headed to the fishing spot where Kim Eung-soo had been spending time since the previous day. Young-tak, who is new to fishing, was having a boring time, and he asked Kim Eung-soo, “What can you learn from fishing?” Kim Eung-soo made everyone laugh when he immediately replied, “You can’t get married without patience.” However, Kim Eung-soo soon revealed his pathetic side, saying, “I’ve never met a woman other than my wife.” He continued, “My wife, who was a broadcast writer, came to cover me as a theater actor, and love began to sprout. “He told a dramatic story.

After moving, Yeong-tak prepared deliciously grilled pork belly in soybean paste stew with canned mugwort and served it to Kim Eung-soo. Kim Eung-soo, who gave a thumbs up saying, “It’s delicious, so I keep coming in.” He said, “I am the textbook for family life,” and started the groom’s class in earnest. Kim Eung-soo said, “When I was an actor, my annual salary was 300,000 won, so I lived with his in-laws. After the birth of his eldest daughter, the thought of feeding her family led him to do a drama that he turned down for three years.” Lastly, Kim Eung-soo finished the special lecture by casting a fatal aegyo for survival and leaving the famous saying, “I have never played under the left in a historical drama, but the role at home is only a servant.”

Park Tae-hwan went out to pick up someone with a fluttering heart. The person in Park Tae-hwan’s car was Ahn Se-hyeon, a butterfly goddess who had been a ‘father’ of 10 years. Then, the two headed to a clothing store in a subtle atmosphere to shop. Here, Park Tae-hwan personally selected Ahn Se-hyun’s clothes, kneeling down to her knees, and holding her waist, re-igniting the ‘something controversy’. Even after shopping, the two took a couple photo at the photo booth and started a basketball match with dinner bets in the arcade, showing off their sweetness.

Park Tae-hwan, who was unfortunately defeated by the buzzer beater (final score), went to Ahn Se-hyeon’s favorite sushi restaurant and enjoyed a meal together. During the meal, the two met, a variant of the topical ‘sesame leaf argument’, ‘a co-worker can connect Bluetooth to a lover’s car’, ‘if I fall out first while drinking with a lover or a friend’ We had a fierce discussion about each other and got to know each other’s views on love. Finally, Park Tae-hwan asked Ahn Se-hyeon about his groom’s score, and Ahn Se-hyeon tactfully replied, “Originally, it was 95, but it was 90 because of her desire to win in the arcade.” In response, Park Tae-hwan said, “I have to refill the five points that have been cut,” and Ahn Se-hyeon gave her clothes that he did not purchase after hesitating in her clothing store as a surprise. At the unexpected event, everyone cheered, saying, “The more I see it, the more ‘heart-thumping’”.

Meanwhile, Mo Tae-beom was the first runner in ‘Groom’s Class’ to go on a blind date, which aroused resentment from other members. A week before the meeting, he went on a diet, dyed his hair for the first time in his life, upgraded his visuals, and went on a blind date with perfect visuals. Mo Tae-beom, who was waiting impatiently for the other person, when Kim Dong-hyun got a phone call, said, “I only got the name and meeting place from the host, and I came out”, revealing the tension ahead of the blind date.

After a while, my blind date, Mr. Im Sa-rang, appeared. Lim Sa-rang, who boasted a doll-like beauty with a slim height, provoked everyone’s ‘pupil enlargement’. Even Mo Tae-beom’s ears turned red. Mo Tae-beom, who said, “I need caffeine,” ordered coffee right away and actively asked questions and talked. Here, Sarang Lim confessed that she was a ballerina who had been doing ballet since she was four years old, and quickly became close friends because of the common interest that both of them practiced. The two, who gained momentum, talked about tennis and even gave high-fives (clap hands).

However, due to Mo Tae-beom’s speech mistake, the atmosphere suddenly became quiet. In the recent story of Mr. Lim Sa-rang, “I am experiencing a lot of things I have never done before,” he added Chuim-sae, “So are you living right now?” Kim Won-hee and Hong Hyun-hee, who watched the scene, pointed out that “it was an error in the first blind date”, and Mo Tae-beom said, “I didn’t mean that,” and waved his hand. After a while, he courageously asked, “Would you like to have dinner together?” While the cast’s attention was focused on Lim Sa-rang’s answer to this, the results of their blind date will be revealed in the next week’s broadcast.

Choose it to upgrade your computer!GIGABYTE B660 AORUS MASTER DDR4 Motherboard Review

“A child’s leg bent in an O∙X shape, at this time, treatment should be started” [인터뷰]