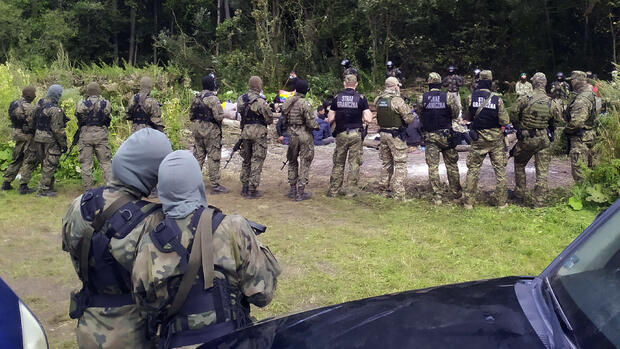 Brussels The images in various European media such as “Spiegel” leave little room for doubt: Videos can be seen how officials from Greece and Croatia brutally force refugees to leave the country. In Croatia they hit the people, in Greece they put the refugees out on rubber dinghies on the sea. Pushback is the illegal practice of deporting a person without giving them the opportunity to apply for asylum.

Some EU states are now working to legalize these pushbacks. Twelve of the 27 EU interior ministers are calling in one Letter to the EU Commission new means of preventing border crossings. “The border surveillance does not prevent people from attempting illegal border crossings”, they complain and suggest: “It would therefore make sense to supplement them with further preventive measures.”

It would also work without the brutal pushbacks. The migration researcher Gerald Knaus has developed a concept for this. In 2015, Knaus drafted the Turkey deal that closed the Balkan route. The head of the “European Stability Initiative“With his concept further promotes the basic idea of ​​the existing agreement with Turkey: According to this, the EU states are supposed to deport people who have entered the EU irregularly and at the same time bring those in particular need of protection from refugee camps to the EU.

As a rule, people without a right to stay are deported to their home country. At the time, however, Turkey also accepted accepting Syrians who had entered via Turkey. Knaus now wants to ensure that other EU states also accept refugees.

“This option is difficult, requires diplomacy and offers, but it is the only option compatible with the rule of law that takes refugee protection seriously and yet reduces irregular migration,” Knaus said in an interview with Handelsblatt. But even this option “discourages people from making their way to Europe in an irregular and life-threatening manner”.

That is also the goal of the pushbacks. It is less about the small number of people who are currently crossing borders. Rather, it is about preventing more people from trying to enter irregularly. Knaus is surprised on the illegal refugee return methods shown in the media, not. “This is the Wild West,” he says of the human rights unsustainable situation at the EU’s external borders.

The duplicity of the EU Commission

The EU denounces the pushbacks, but at the same time it supports the border states in “protecting” the EU external borders with a lot of money and with the European border protection agency Frontex. In Brussels, too, they know that without the pushbacks, many more people would come to the EU. The problems that then arise have not been resolved: overcrowded refugee camps at the borders and the refusal of EU states to take in people from there.

Knaus therefore calls for a restart of the Turkey deal and further agreements based on this model: This would mean that Turkey is financially supported in caring for refugees and the agreement to take back refugees is revived. “We know that this can work if asylum applications are processed quickly and if there are partners for this,” said Knaus.

He is also optimistic that other countries outside the EU would agree to join. “They would have to get something for their citizens, not just money,” said Knaus, citing for example “access to the EU market and more legal labor migration” from the respective state. According to Knaus, the goal is not to create large camps there, “but to close the path to the EU in a humane way”.

The alternatives to this would either be open borders, as they existed in 2015. That is politically utopian. Or a push back without testing, as is currently the case in Greece, Poland and Croatia. But that was “a legal and moral disaster” for the EU, said Knaus. Especially on the border with Belarus it is not justifiable: Alexander Lukashenko, who ruled in Minsk, is ready to torture his own population. He would also accept the death of refugees. The EU must not enter into a brutal competition with a dictator, as Poland is currently doing.

The easier it is to get to the EU via the regular route, the easier it is to reduce irregular migration. There are also resettlement programs from which Turkey could benefit, as well as many Afghans who had to leave the country because the Taliban came to power.

Like Canada, the USA and Great Britain, many EU countries also want to report figures on how many Afghans they will take in in the coming year. The UN refugee agency UNHCR collects these figures and assigns refugees to the host countries accordingly. The EU states want to jointly announce their figures, which is currently failing because of Germany. “The registration has not yet been made by Germany due to the ongoing formation of a government,” said a spokeswoman for the Federal Ministry of the Interior to the Handelsblatt.

It is important that Germany and France work together for agreements with third countries and for resettlements, says Knaus. In his opinion, “the next German federal government should work hard to achieve this. Pushbacks to Belarus or indirectly to Libya should be unacceptable for all German parties. “

More: In an interview, migration researcher Gerald Knaus explains how the EU can deal with Alexander Lukashenko’s brutal policies